Connecting Elon and Burlington one step at a time 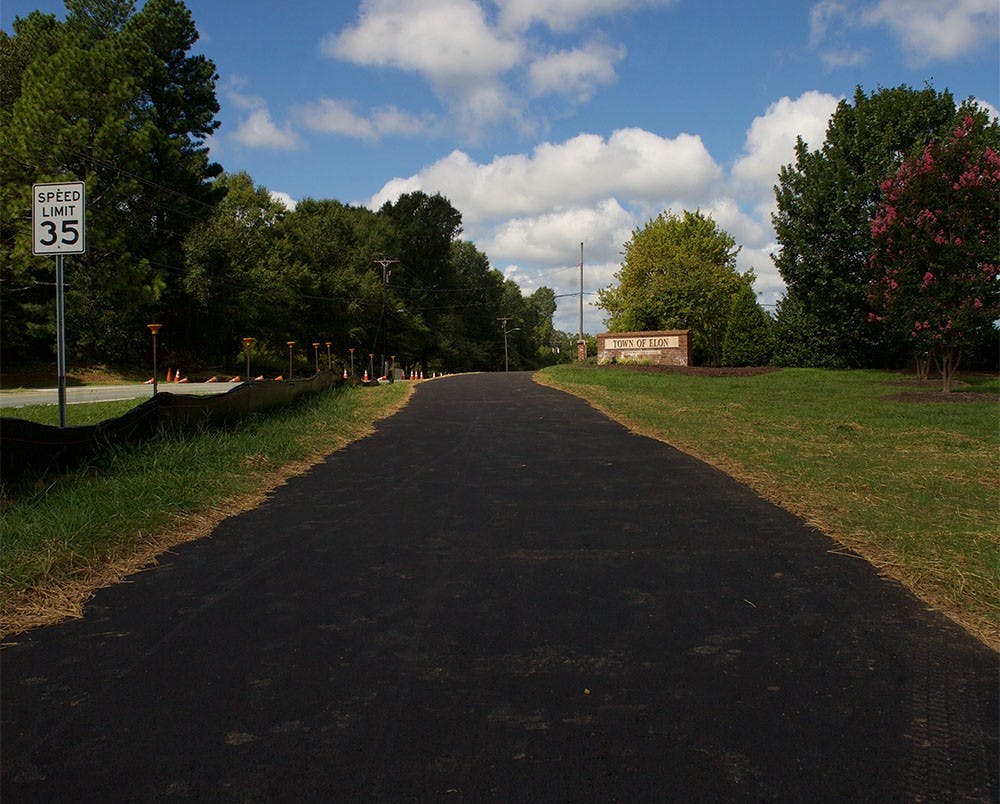 BURLINGTON — With every foot of the new greenway laid alongside Front Street, the connection between the City of Burlington and the Town of Elon is becoming more accessible to pedestrians.

The Elon-Burlington Greenway, a 3.6-mile-long biking and walking path, is expected to be completed by early December.

“It’s going to be something brand new,” said Mike Nunn, transportation and interim project manager for Burlington. “People have probably traveled to other places and heard the word or seen the greenway signs, maybe they saw other people out running or walking, and we’re going to be able to do that here now,” Nunn said. “It’ll take some time for people to get used to what a greenway is and the benefits it provides.”

As of the beginning of September, parts of the greenway have already been paved in Burlington and are open to the public. One of these sections is located alongside Front Street near Loy Farm.

Conceptualization of the project began in 2017 as part of the Burlington mission to improve pedestrian, bicycle and recreational areas. After receiving public input, city officials moved forward with the project because of its ability to serve as a recreation and transportation resource to the community.

“Obviously, we felt good that we were doing a comprehensive citywide approach. We have lots of needs in the city and if we don’t look at all of them together, it’s hard to make progress,” Nunn said.

The first phase of the greenway system is expected to cost $500,000. Its cost is being collectively funded by the local governments of Burlington and Elon, private organizations such as Elon University, LabCorp and the Impact Alamance foundation.

According to Nunn, Impact Alamance is the project’s primary donor having given more than $200,000. Bob Shea, Elon University’s vice president for business, finance and technology, said the university did not donate a “significant amount of money.”

Burlington has received partial funding for the second phase of the planned greenway system, which will connect the city’s animal services building to Haw River Trail. According to Lasater, the purpose of this phase is to provide an opportunity for potential pet owners to take shelter animals on walks to decide whether to adopt them.

"Not everyone has a car, so it's an economic driver. ... When you think about Alamance County being the best place to live and thrive, health and quality of life and economic factors are all drivers of that being successful ."

“Greenways aren’t only active modes of transportation, but they’re also economic connectors,” Grayzer said. “Not everyone has a car, so it’s an economic driver. ... When you think about Alamance County being the best place to live and thrive, health and quality of life and economic factors are all drivers of that being successful.”

For Elon students without a car, the greenway may serve as a much-needed route into the city.

Senior Claire Thompson did not have a car on campus during her first year of college and found the city of Burlington to be mostly inaccessible. Thompson said she believes the greenway will be widely used across campus as an alternative to driving.

“I also enjoy running and it’s really hard without sidewalks feeling safe running on the road, so I’m pretty limited to campus in that regard,” Thompson said. “I definitely think this will increase the safety around running or biking or just being off campus when you’re not in a car. I think it’ll help pedestrian safety by having alternative options to being directly on the road with the cars.”

As a member of Elon Outdoors, Thompson said the club might use the pathway for outdoor activities.

Because the greenway is safe, environmentally friendly and promotes community engagement, Shea said it aligns with Elon’s current and future strategic plans, the document that governs the university’s direction and resource allocation for a 10-year period.

“Many of us live in the community, both students, faculty and staff, so to be engaged in the community is part of what we do,” Shea said, emphasizing the need for a connection between Burlington and Elon.

As a cyclist himself, Shea said he plans on riding his bike on the greenway to explore Burlington’s food and entertainment scene.

Though the path will not be completed until the end of 2019, Lasater said students have already been jogging on the finished stretches of greenway. She hopes the project will positively affect the relationship between Elon and Burlington.

“Burlington is basically in the backyard of Elon University,” Lasater said. “We know that the students and the community surrounding the university use our city as their city, which we love. We really want to see that continue and we hope this greenway is part of that.”

According to Lasater, the construction crew has not experienced any setbacks so far. However, as the hurricane season intensifies, she said the team is “ready for whatever we need to do to get it done.”