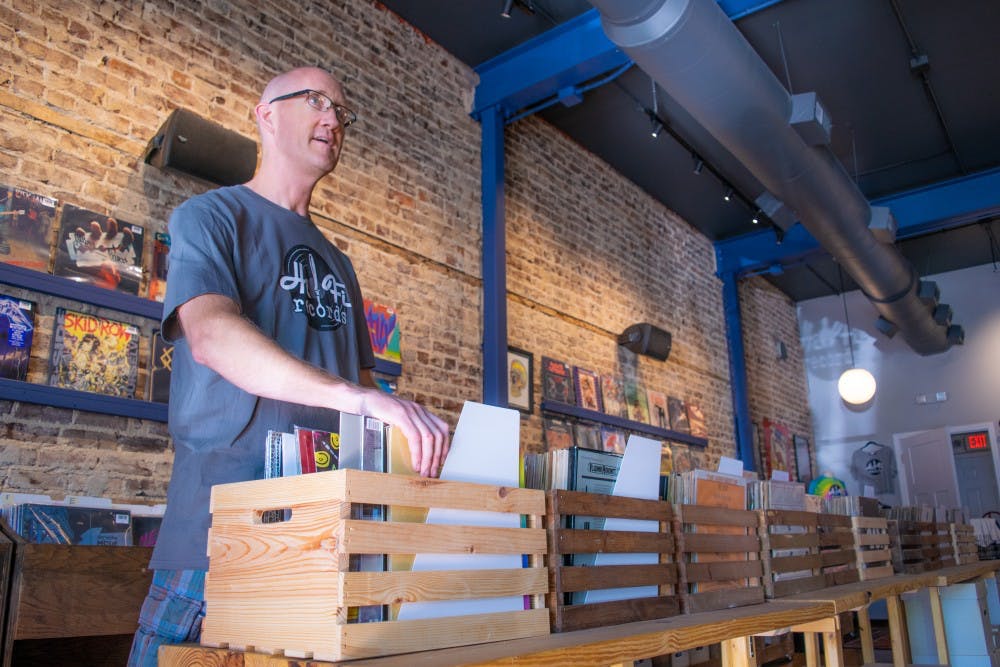 Photo by Jack Norcross | Elon News Network
Jon Guza graduated from Elon University with a degree in journalism in 1997. He is now the owner of Hi Fi Records, a hybrid vinyl and beer store in Graham, North Carolina.

GRAHAM — When walking into Hi Fi Records in Graham, North Carolina, there are many sights and sounds. Whether it be the wall of records along the left side of the store, the bar to the right with record players emitting rock ‘n’ roll, or the wall of music posters hanging in the back. One thing that is not noticeable, but present, is the store’s connection to Elon University.

Jon Guza ’97, a Rush fan and owner of Hi Fi, spent over 20 years at International Inventory Management in the Town of Elon. It was not until 2017 that he and his girlfriend started planning to open the store — Guza was looking for a change.

“I was getting a little frustrated at my job because I had been doing it for so long and I just didn’t really feel like ... I was growing as a person,” Guza said. “I wanted to do something I could really sink my teeth into.”

"Some folks will come in and ignore the records and go straight to the beer, and some will do the opposite and some will do both. It's been really cool just to see the reaction of people ."

After choosing a little storefront on N. Main Street, the store opened in January 2019. Guza said that his store combines two things he loves: music and beer. He also said the combination brings in customers with different interests.

“Some folks will come in and ignore the records and go straight to the beer, and some will do the opposite and some will do both,” Guza said. “It’s been really cool just to see the reaction of people.”

At Hi Fi, Guza said he strives to create a personal environment.

“I really like to make everybody who comes in the door comfortable,” Guza said. “If we start to see people on a regular basis, I make sure to try to remember their name.”

That is not the only way that Guza tries to create a personal environment. There is only one television and the only thing shown is the beer menu.

Guza said this decision was meant to eliminate distractions and to fuel conversation.

“Everybody’s got music in common [and] beer is everywhere,” Guza said. “And so there’s always those two things to talk about and they can lead to other topics always.”

From Electric Light Orchestra to Styx to Greta Van Fleet, Guza said he has a lot of different records, both new and old. He also said that he gets records from different places, and sometimes finds interesting things in the record sleeves.

“A lot of the time, funny stuff falls out of records,” Guza said, referring to photographs and love notes that he has found.

On weekdays, you might find Guza behind the counter, but he’s not the only one running Hi Fi. Guza’s girlfriend and Janice Joplin fan, Molly Feudale, also helps at the store on the weekends and during the summer.

During the week, she is an art teacher at South Mebane Elementary School — her artistic abilities helped when decorating the store.

“I have a major interest in art that helped me with ... designing the layout of this place and the decor,” Fuedale said.

Like Guza, Fuedale said she loves interacting with all of the customers at Hi Fi.

“It’s a lot of fun to interact with everybody. Everybody that comes in is in a good mood,” Fuedale said. “Everybody’s excited about the concept [and] the nostalgia of the records.”

In the eight months Hi Fi has been open, Fuedale says that she has seen Elon students make their way into the store.

Scott said he is “proud” of Guza for opening Hi Fi. He also said that coming to the store is a nice change of pace.

“Sometimes it’s just nice to come here and have a beer, listen to some good tunes with somebody playing the music,” Scott said. “Where you don’t have to worry about … figuring out which song is next.”

Guza and Fuedale are not the only ones keeping an eye out for places to acquire new records for the store.

Heather said she and Scott are looking as well.

“I know my dad has a whole bunch that he’s not ready to get rid of, but I know when he is — I’ll probably definitely bring him down here,” Heather said.

Guza’s passion for beer and music has given Graham a place to engage in conversation, have a beer, and turn back the clock by listening to a wide variety of music on vinyl.