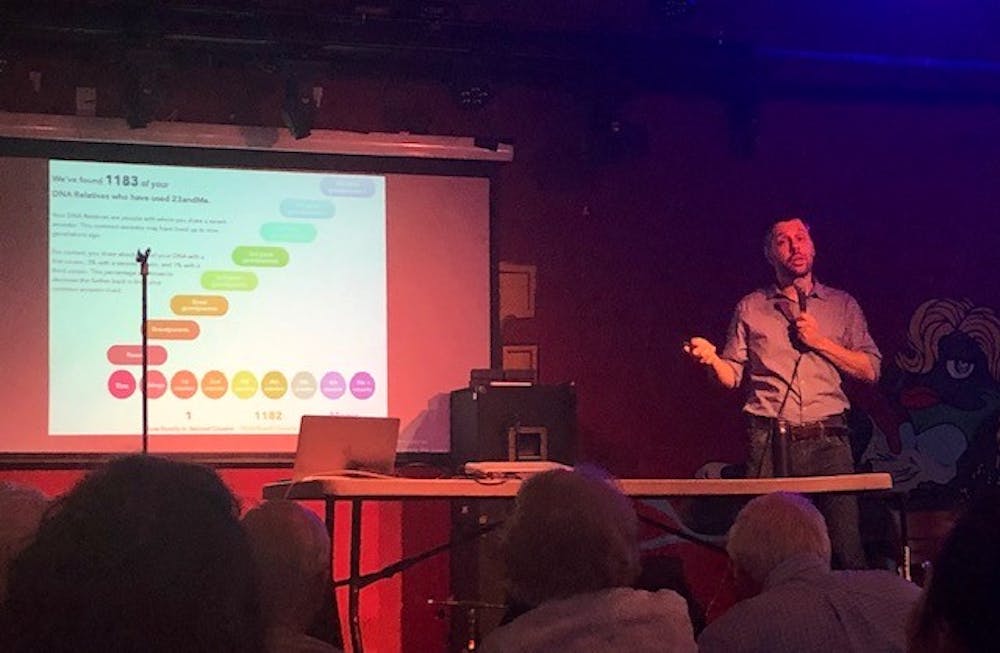 According to Parker, the Science Cafe was started in 2012 by biology professor Dave Gammon as a was for students and community members to engage with science in a relaxed atmosphere, without the jargon or added pressure of a grade.

Parker is part of the Science Cafe’s speaker series on genetic sequencing services. The theme is loosely based on this year’s common reading, "Future Face" by Alex Wagner.

"I think demystifying it and talking about DNA sequencing and what affect it can have on a society is important."

professor of biology at Elon University

“DNA sequencing is becoming more and more prevalent in people's health and their everyday lives. It's profile is becoming higher and higher in society in general,” Parker said. “I think demystifying it and talking about DNA sequencing and what affect it can have on a society is important.”

During his presentation, Parker shared his personal and professional views his DNA sequencing results from 23andMe, a company which provides personalized ancestry and genetic health marker reports.

Parker decided to take a 23andMe test while teaching a class on personalized medicine. As a geneticist, Parker said he expected to be un-fazed by the results of his test, but learned some unusual information.

“The most surprising thing at the time was that I carry a genetic mutation that predisposes one to Alzheimer's Disease,” Parker said. “That is the big scary one that no one wants to find out about because there's no cure for that disease and of course it's a terrifying prospect. That was odd because there's no history of that in my family, and because that has such serious implications that was a shock.”

Parker’s results also said that he had a 23% chance of becoming a Type 2 diabetic between the ages of 46 and 80. He said that those odds may seem low to most people, but Parker was diagnosed with type 2 diabetes several months ago.

Parker recommend that students who want to explore their family history or genetic risk factors through genetic sequencing services remain aware of three key principles: human genetics are very complex, there are many undiscovered genetic risk factors, and that odds should be taken seriously.

Terry Tomasek, an associate professor in the departments of education and wellness who attended the presentation, said that she has never taken a genetic sequencing test and does not plan to.

“[Parker] pointed out that [the test] would make you more aware, but I think he also talked about the disadvantage that now you are more aware,” Tomasek said. “There are both sides of the coin, but I do think he was really just sharing his story and leaving people to decide for themselves.”

The Alamance County Science Cafe presentations are held at the Fat Frog on the second Tuesday of every month. The presentations on Oct. 8, Nov. 12 and Dec. 10 will all be related to genetics.