Volety prepares to lead Elon into the next decade and beyond 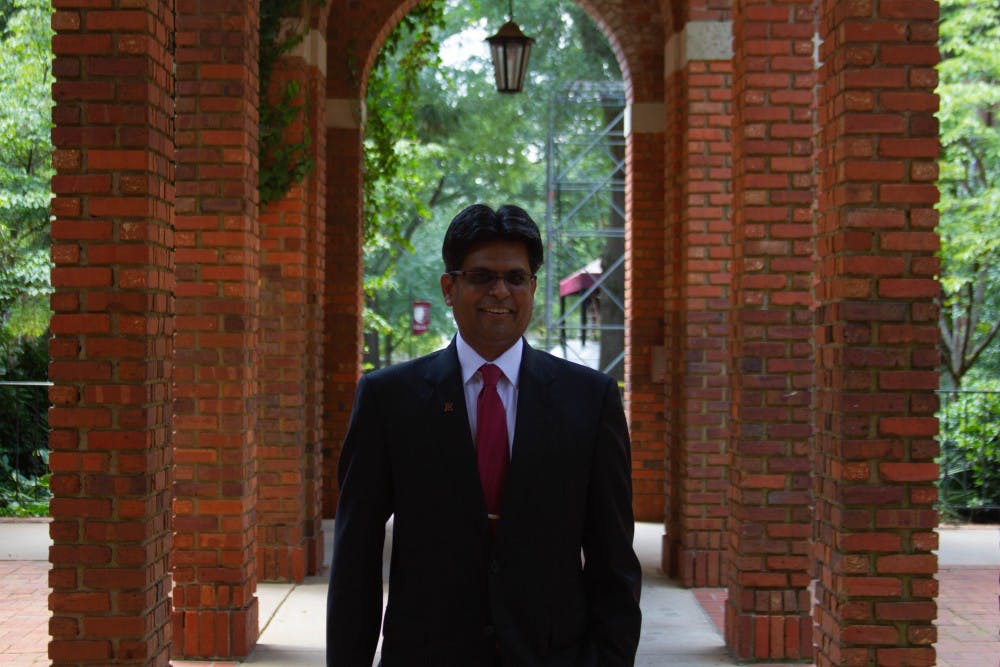 Growing up in the coastal town of Visakhapatnam, India, Aswani Volety, Elon’s incoming provost, believed that the American education system was the best in the world.

After finishing high school at the age of 15 and college three years later, the travel enthusiast and avid scholar left to pursue his Ph.D. in the United States in 1990, starting on a path he never expected to take.

Volety always knew he wanted to be a scientist. Inspired by his greatest role model, his aunt, who attended medical school at a time when Indian women were rarely able to pursue an education, Volety decided to become a doctor.

Impressed with Elon University’s focus on undergraduate education and high-impact practices, Volety applied for the provost position, unsure of what the outcome would be.

Eric Hall, a professor of Exercise Science and co-chair of the Provost Search Committee, said the institution as a whole was impressed with Volety’s straightforward demeanor and extensive experience.

“From the listening sessions from early on, it was clear that our community wanted somebody to come in from outside,” Hall said. “They were looking for some new ideas and new perspectives, and obviously Dr. Volety brings that. That was the factor we were looking for and I think we were able to get that with him.”

As a first generation college student who credits his success to his mentors, Volety said his goal is to help as many students as possible benefit from their education.

“I promised when I was interviewing that you will not have a provost who is going to be focused solely on the deans and the leadership and being in the office,” Volety said. “Even at UNCW, I’m a dean that is more externally focused, whether it be students, events or otherwise. Here is my promise: I will be a provost that will be more adamant about students, seeing what they’re going through and understanding what they need, and doing the best I can to support them.”

Richard Ogle, interim-dean of the College of Arts and Cciences at UNCW, met Volety as a candidate for deanship. Within 15 minutes, Ogle said he and his fellow search committee members knew Volety was the right man for the job.

During Volety’s deanship, Ogle enjoyed the many different ways he got to work with Volety either as the department chair of psychology or as an associate dean.

“I’ve been at UNCW for 18 years, and every dean I’ve worked for was a really good dean, but Aswani was a transformative dean,” Ogle said.

Volety was skilled at the “chess game” of managing a large liberal arts college, overseeing many departments and programs across the full spectrum of arts, sciences and humanities, said Ogle. He instituted several masters and doctoral programs, strengthened relationships with universities around the world, and increased the fundraising of the college. According to Ogle, Volety was an advocate for the college’s faculty, increasing the operational budget of departments so that they could fund faculty development.

“The international program profile that Elon has, along with the fact that Elon is interested in continuing to develop in areas of STEM, I can’t imagine a more qualified person at this point to take over as provost,” Ogle said. “From what I know about what you’re looking for, you chose the perfect person.”

Job title aside, Steven House, Elon’s outgoing provost and incoming executive vice president who has spent 18 years at Elon, shares something in common with Volety: his love for data.

“He’s a scientist, and I believe scientists are well prepared to really work on all the details and organizations of being a provost,” House said. “He certainly has that skill set, and he considers data and analyzing data when it comes to making decisions, and I think that’s important because that’s the same way I am.”

Volety said he is excited to “stand on the shoulders of giants that came before” him, but he has unique plans for the university’s experiential learning programs and curriculum. As Elon prepares to enter its 2020 Strategic Plan, Volety said he is not only thinking about both what would help students succeed tomorrow and ten years from now.

“These are applications for practically any field you can think of,” Volety said. “Not to mention the opportunities for employment for students are phenomenal. Gone are the days when it is a straight degree program, whether it is the arts and humanities, social sciences or professional schools. Careers are going to be more in terms of collaboration with people.”

Because careers are becoming more collaborative, Volety said that gaining cultural competency through study abroad is very valuable. But according to Volety, students who are unable to study abroad may also benefit from interacting with international students on campus.

“As Elon focuses on improving its diversity and inclusion in the coming years, these high impact practices will make a lot of difference,” Volety said. “This is a great opportunity for Elon, in addition to sending students to other countries, to also attract students from other countries to come to Elon. That way, the students locally who didn’t have as many opportunities to go overseas will have similar cultural exchange opportunities.”

Despite his numerous academic and professional successes at UNCW, Volety said the true highlight of his job was working with the students.

"I always felt that there was one and only one reason why we are in this job and that's the students."

“I always felt that there was one and only one reason why we are in this job and that’s the students,” Volety said. “I’m very passionate about them and everything I do has to revolve around students, and somehow it has to help students.”

According to Ogle, Volety had a strong relationship with the student body, and came to nearly every student production at UNCW, be it a music recital or theater play.

Volety was also the first dean to institute UNCW’s Dean’s Student Leadership Council (DSLC), which was comprised of students from across the College of Arts and Sciences meant to encourage student participation in the college’s events and to address student concerns.

Kate Woolard, now a Ph.D. student at Arizona State University, served as co-chair on DSLC during her time at UNCW. She said that Volety was always willing to listen and work with students.

“Dr. Volety cared a lot about student experience at UNCW,” Woolard said. “For instance, when students brought up during a Dean’s Student Leadership Council meeting that a certain classroom had outdated and unstable seating he replaced all the chairs in the room. Another way he showed he cared was by remembering students. Whenever we were at the meetings he would remember students and what they were interested in. He would also try to connect them with professors or projects that were related to their interests.”

Because he encouraged her to pursue her studies, Woolard said Volety is the reason she applied to a Ph.D. program at all.

Volety plans to continue engaging with students at Elon, and said he will be living in Colonnades this year to gain a better understanding of the student experience.

“I measure my success based on my students’ success,” Volety said. “I personally think the education I received, the help I received when I came to this country, and the mentors that happened along the way are the reasons I am where I am. So, my goal is to make sure I do the same thing for other students.”