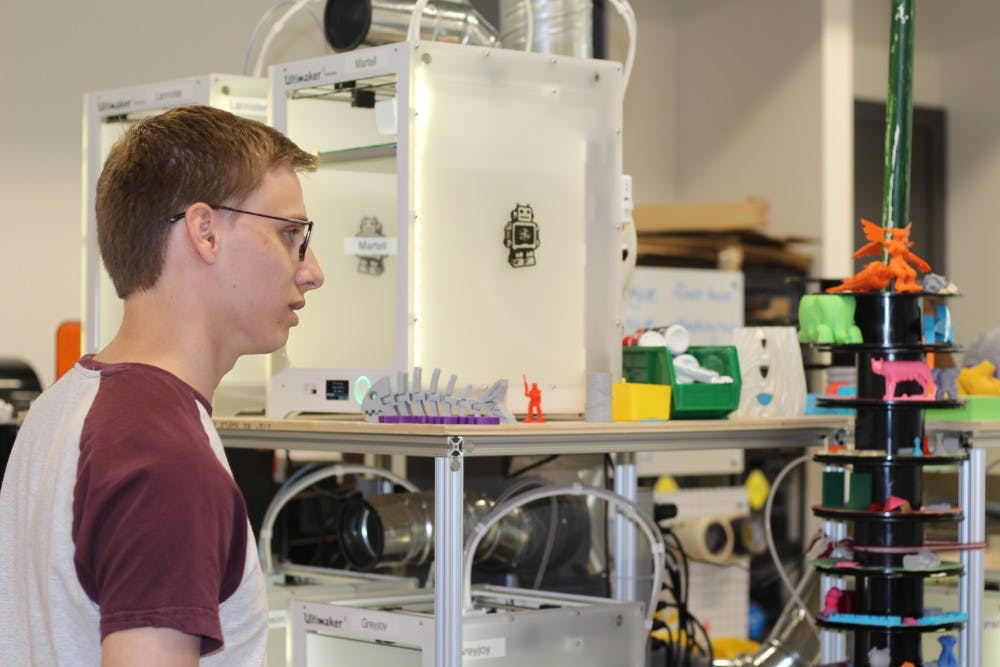 From theater props to smart mirrors, this year’s Maker Takeover will feature a variety of innovative projects created in Elon University’s Maker Hub. The Hub’s tagline, “Everyone is a Maker,” will be demonstrated through presentations, showcases and interactive tutorials.

On Wednesday, May 1, in the Moseley Center, students and faculty members will have the chance to show off their passion projects — some of which have taken weeks or months to complete, said senior Joshua Donnald, a team leader of operations at the Maker Hub.

“It’s about giving students and faculty the opportunity to showcase their projects and kind of show off what they’ve been working on,” Donnald said. “It’s one thing to pull your friends aside to show off a project versus being given a whole stage to do it.”

Sophomore Tiana Binns, a contributor to the event, will have two of her projects on display — a cat condo and a longboard.

“This is definitely my first time being able to show off my projects,” Binns said. “I feel like that’s how it is for a lot of people just because there really aren’t other opportunities for us to show off what we make aside from just having it in the Maker Hub.”

This will be the third annual Maker Takeover, which originally began as a showcase for students who participated in the Maker Hub’s Kickbox project, during which applicants receive a $300 gift card and materials to jumpstart the project of their choice, said Daniel Reis, senior instructional technologist at the Maker Hub. These “Kickboxers” will also be present at the event.

Sam Jimenez, the Maker Hub’s newest team leader of operations, used the Kickbox program to make a fully functional drone from scratch. He plans to produce a beginner-friendly guide to drone building so others can do the same.

“It’s very intimidating and hard to get into,” Jimenez said, “but I want to make it simple and clear-cut.”

Reis’ primary goal is to help students use the Maker Hub to their advantage, regardless of their major.

Flynn said while underclassmen are more familiar with the Maker Hub, many upperclassmen are still unaware of its resources, mostly because Elon 101 professors introduce the Hub to their students early on.

When students do visit one or both of the Maker Hub’s locations, their creative process may end before the crafting ever begins.

“One of the common problems we get is people come in and would like to make something but unfortunately they’ve already hit that roadblock and don’t have that starting idea,” Flynn said. “I hope that Maker Takeover will inspire them and will have them realize what they might want to make in the future — or at least get them to go on Pinterest.”

But for others, the Maker Hub provides a much-needed outlet. Binns enjoys pouring herself into personal projects without the pressure of a grade.

“I know Elon has such a busy culture and stress is school-wide,” Binns said. “Everyone is always stressed, and this is a place you can come to and have a creative outlet for that stress.”

Flynn hopes the Maker Takeover will inspire students to indulge in the “maker process.”

“It’s really about that whole idea of start to finish. Starting from an idea and bringing it to fruition. If you fail, it’s OK, but we’re here to help you and make sure you get through that and get over those little bumps,” Flynn said. “We have your glue, we have your tape, we have every little thing you need. You might as well come.”