For over a year, these students have been "tested" in unexpected ways 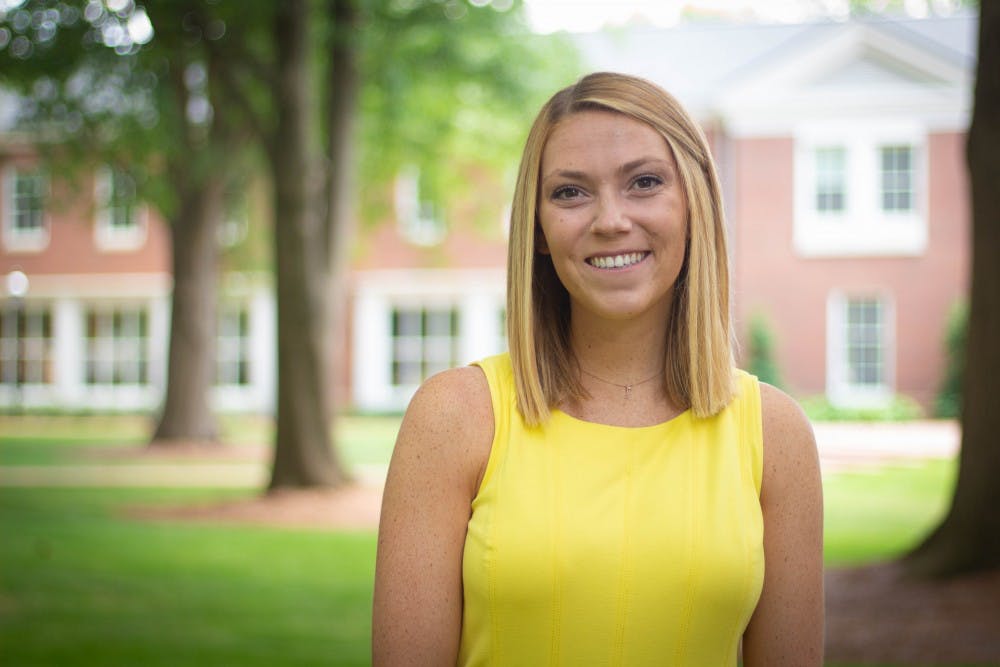 Photo by Abby Gibbs | Elon News Network
Senior Jill Watkins will be teaching English in Malaysia in the fall. Watkins received the Fulbright grant with five other Elon seniors and one alumna.

When Elon University senior Jill Watkins was sitting in the Fort Lauderdale, Florida, airport getting ready to fly to Punta Cana for spring break, the last thing she was expecting to see light up her phone was an email from a Malaysian ambassador. After staring at her phone without moving, she finally opened the email and saw only one thing before bursting into tears:

Watkins had received the Fulbright Malaysia grant, meaning her application to become an English Teaching Assistant there — the creation of which took over a year to complete — had been accepted.

The Fulbright U.S. Student Program “offers research, study and teaching opportunities” to recent graduates and graduate students in more than 140 countries in six global regions, according to the Fulbright website. Regions include East Asia-Pacific, Europe and Eurasia, Middle East and North Africa and the Western hemisphere, among others.

Every year, Fulbright awards about 2,000 grants in “all fields of study,” according to its website. This year, five Elon seniors and an alumna were awarded Fulbright grants, an increase from four students last year.

“This is an effort we’ve been working on for several years,” said Elon President Connie Book on the university’s participation with Fulbright. “Each year we’re producing more and more Fulbright scholars. It’s a really good match with our … goal for global understanding and global excellence.”

The Elon National and International Fellowships Office guides students through an intensive application process beginning the spring before the application is due, according to a checklist issued by NIFO.

One of the most important aspects of the Fulbright application to be completed in the spring is choosing which country’s grant to which students will apply, according to a joint statement by NIFO Director Janet Myers and Associate Director Sarah Krech.

“We spend a lot of time upfront helping students find a good match in terms of the country and grant,” Myers and Krech said.

But the process of choosing the right program can be difficult, according to Kobos.

“The process is highly competitive, and you will be living there for a full year, so it is extremely important to pick a country that suits you well,” Kobos said.

According to Kobos, some factors that led her to apply for an ETA grant in the Czech Republic included language requirements, the age group of her students, her family’s heritage and overall interest in the region.

For Watkins, the process of deciding where to apply had more to do with a process of elimination.

“Malaysia was just checking off all my boxes, and other programs weren’t,” Watkins said. Some of these “boxes” included the region, age of students and the opportunity for a “rural experience,” which Watkins said was particularly important.

“I’ve been privileged enough to do a lot of traveling around the world, and that is really, really, really where my calling is,” Watkins said. “I love, love, love to be pushed out of my comfort zone and see things and experience things and live in ways I never have before, and so I think that is what kind of drove me to that rural call.”

But choosing a program is only the tip of the iceberg in the application process, according to Myers and Krech.

The next step, according to NIFO, is writing a personal statement that includes “an authentic, passionate, and gutsy personal narrative” as well as a grant proposal that demonstrates elements such as “quality and feasibility of the proposal,” “personal qualifications” and “language preparation.” The writing and editing of these documents is, according to both mentors and applicants, extremely difficult.

“The greatest challenge is fitting [the students’] complex narratives into a one-page, single-spaced personal statement,” Myers and Krech said.

Senior Crystal Sharp, another Fulbright applicant this year, agreed that editing her personal statement down was difficult.

“There’s so much correcting in only a one-page, single-spaced piece of paper,” Sharp said. “You go between one adviser and another, and they sometimes give you different comments.”

Though Sharp’s application for an ETA grant in Germany was not accepted, she said the application process was still rewarding though it came with intense challenges.

“I actually almost quit the whole thing,” Sharp said. “It was pretty stressful to feel like their comments contradicted each other and to not know who had more authority or who knew best.”

While Watkins never thought of quitting, the struggle of hearing multiple perspectives while editing is one she said she was also intimately familiar with during the application process.

recipients — three seniors and an alumna — accepted their Fulbright grants. The remaining two recipients declined their awards to pursue other opportunities.

“I’ve never been pushed that hard. I’ve never been tested that much,” Watkins said. At one point, she said she even left a meeting in tears because a professor “tore [her statement] to shreds” while editing it.

“That was hard for me, to be able to stick up for my own writing,” Watkins said.

Ultimately, both Sharp and Watkins said they feel the process was worth the stress.

“It is really rewarding even if you don’t get it,” Sharp said, who was able to recycle the edited materials from her Fulbright U.S. application to Germany in a separate Fulbright Austria application. “The fellowship office, they really focus on Fulbright, so you’re not going to necessarily get the same checks with every program, so doing Fulbright gets you those checks,” Sharp said.

Sharp also said completing the application taught her about herself in unexpected ways.

“I actually did learn that I wouldn’t mind teaching English to younger people,” Sharp said, noting she had always planned to teach German to native English speakers. “I also learned that I’m a lot stronger than I thought I was because I actually did all of it.”

Watkins agrees that the application process, while difficult, taught her about her own strengths.

“It really taught me to own my own writing,” Watkins.

Near the end of the application process around the beginning of October, according to a timeline issued by NIFO, comes a special moment, according to some applicants.

“I was sitting in Oak House, actually, when I hit the submit button,” Watkins said. “I woke up the next morning and I had this feeling of relief, like everything is going to work out no matter what happens.”

Sharp said she experienced a similar moment of calmness upon submitting her application. She’d had a FaceTime call with her parents so she could read her application aloud and catch any last-minute errors.

“Neither of my parents went to college, so getting to have this moment of, I’m applying for this pretty big thing and my parents are helping me correct this essay, … just having my parents’ encouragement I think really helped,” Sharp said.

But the most grueling part of the application process is what comes after the submission, according to applicants: the waiting.

“I think the most difficult part was the minute I hit that submit button to the minute I got the email saying I was in,” Watkins said. Kobos agrees.

“I was lucky that I [had applied to] one of the first countries who announced in March, but waiting was agonizing,” Kobos said.

Hearing either good or bad news at the end of the waiting period was a relief, according to applicants.

"my biggest hope is to become part of a community that can teach me just as much and definitely more than i can teach them."

“Working as an ETA will ultimately benefit my students as I will be able to share the lessons that I have learned with them,” Kobos said.

And Watkins echoed. “I’m going to be pushed out of my comfort zone in ways I can’t imagine,” Watkins said about her upcoming year in Malaysia. “My biggest hope is to become part of a community that can teach me just as much and definitely more than I can teach them … and just being able to bring that back to the U.S.”