Survivors speak out at Take Back the Night

The event allowed students to share their experiences with sexual assault 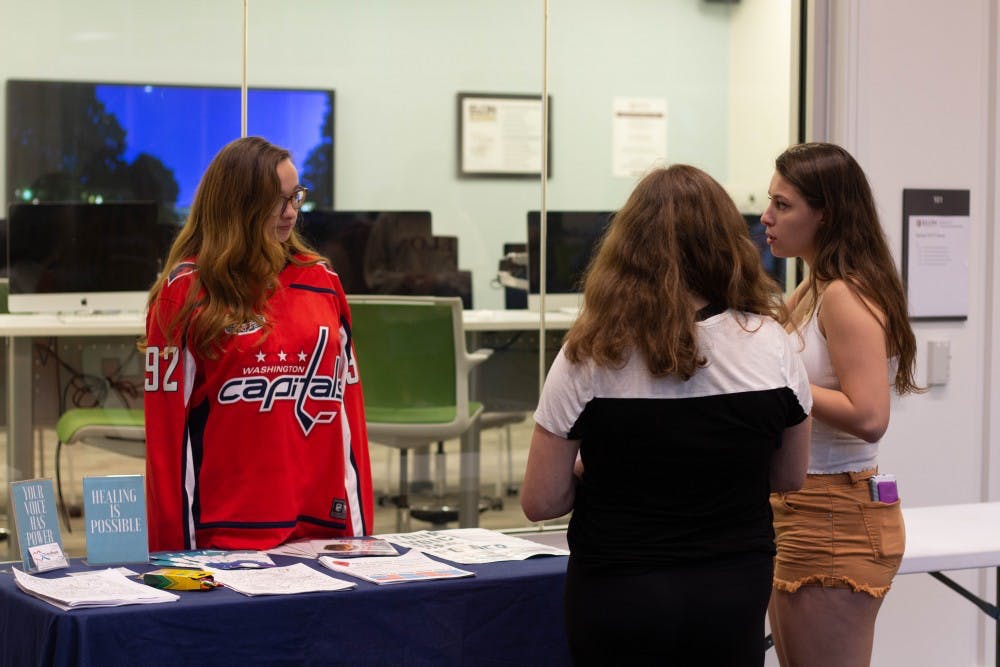 Photo by Hannah Massen | Elon News Network
Sophomore Holly Eldridge (left) listens to students at a table in Steers Pavilion during the reception for Take Back the Night on Thursday, April 18. Eldridge is an intern for Crossroads in Alamance County, a resource center for victims of sexual assault and human trafficking.

At first, no one wanted to take the stage in Whitley Auditorium. The audience sat silently for a minute, facing handmade posters that read, “If she was asking for it, why couldn’t you?” and “Survivors deserve better.” Then one after another, several Elon University students disclosed their experiences with sexual assault and abuse. Each story was different, but they shared a common message: you are not alone.

Take Back the Night is an event hosted once a semester by the Gender and LGBTQIA Center (GLC) in partnership with the Iota Psi chapter of Alpha Chi Omega and other student organizations, according to Becca Bishopric Patterson, assistant director of the GLC. Students have the option to speak about their experiences in a designated safe space.

“It’s easier for folks to dismiss an accusation or a story when they can’t put a face with that story,” Patterson said. “We have people who bring all kinds of stories to this event and use it not only as a platform to bring awareness but as a way to open up space for people to say, ‘Wow, this has happened to someone else too.’ It creates this movement and community of survivors on campus.”

Senior Lauren Silverman, a gender violence prevention coordinator in the GLC, finds that students have become more open about their experiences in the wake of the #MeToo movement.

“I hope the audience takes away — regardless of if they wanted to speak at it — that there are people around them who are able to empathize with them and that there is a support system even outside of the people that they may know,” Silverman said. “Seeing people speak about their experiences and hearing what they’ve gone through really does validate why I do this work.”

Silverman and her coworker, junior Catherine O’Reilly, deliver active bystander education sessions to residence halls, Elon 101 classes and smaller groups on campus. The 30-minute sessions are meant to equip students with the skills to intervene in a potentially dangerous situation.

Despite the GLC’s sexual violence prevention efforts, Patterson said students may be unaware of other support systems on campus.

“There are resources on campus, but sometimes, we just don’t have the capacity to reach everybody,” Patterson said. “[Students] get the message maybe once over orientation or through the Haven program, but if that’s the last time they hear about resources, when something happens, they’re not going to know what to do.”

Take Back the Night was followed by a resource fair in Steers Pavilion. Campus sexual violence resources include a coordinator for violence response in counseling services; Safeline, a confidential, 24-hour hotline; and Elon’s Title IX office.

The Title IX office works to provide accommodations for survivors so they may continue their educational experience. Mike Neiduski, the university’s Title IX coordinator, said in a written statement that accommodations might include an alternative class schedule, moving residence hall rooms or apartments, withdrawing from classes or implementing cease contact directives. The office is also responsible for investigating any and all reports of sexual assault.

“For instances where our Sexual Misconduct and Interpersonal Violence Policy may have been violated, we conduct an investigation into the report where both parties have equal protections in the process,” Neiduski said. “We make determinations based on a preponderance of the evidence.”

Even with these campus services, junior Madisen Johnson, vice president of philanthropy of Alpha Chi Omega, said sexual assault can happen to anyone.

Johnson usually feels safe walking around campus, but she has witnessed cat calling, people yelling obscenities and people who do not respond to the word “no.”

“I think there are some voices that aren’t heard and that need to be heard,” Johnson said. “It could happen at a party on campus, it could happen anywhere, and we need to make sure that Elon is holding everyone accountable in those cases. ... They need to support the survivors by having programs and make sure there are consequences for anyone who assaults anyone.”

According to Patterson, the conversation among faculty, staff and student advocates is more complex.

“We don’t just want to hold someone accountable in the sense of suspending or expelling them, and then they go and do this somewhere else,” Patterson said. “What kind of support and counseling do they need to move forward as well? When students come to us, one of the things we hear a lot is students saying, ‘I just don’t want this person to do it again.’”

But when it comes to preventing sexual violence on campus, the GLC’s team starts by encouraging students to speak out.

According to O’Reilly, reducing cases of sexual assault starts with bystanders.

“It’s about holding each other accountable and having the language and the tools to intervene in a situation if it’s comfortable for them, but not being afraid to intervene,” O’Reilly said. “The best thing is being aware of the resources on campus and being aware that their voice matters.”

Patterson is focused on centering survivors’ stories through events like Take Back the Night.

“We have to start with survivor voices,” Patterson said. “We have to make sure that many different identities and experiences are represented so we know what needs to happen next.”