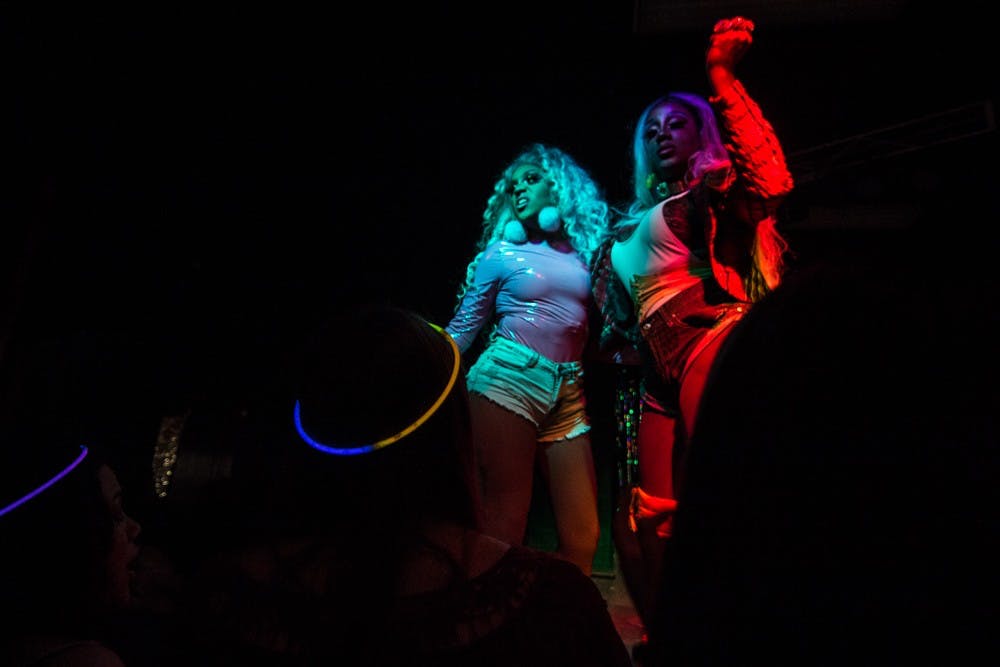 
Stormie Daie and Naomie Dix perform a duet at the Dragstravaganza show.

The evening of April 5th saw Elon students filling Taphouse to participate in a celebration focused on the queer community of Elon.

Dragstravaganza is a show involving both professional and student drag queens and kings. This spring’s show headlined an Elon alumnus, Stormie Daie, and her fellow professional queen, Naomi Dix.

The show was a product of collaboration between the Gender & LGBTQIA+ Center (GLC), Spectrum, and the Student Union Board.

Trinity Dixon is the Educational Resource Coordinator at the GLC, and acted as a leading role in organizing Dragstravaganza.

Dixon highlighted that Dragstravaganza was a team effort, needing a lot of work behind the scenes to make the event as great as possible.

“The event is very glamourous, but, its like, preparing for the event is not as glamourous. It’s very just, like, a lot of emails, a lot of meetings, but I enjoyed it. It was a lot of fun for me to just like connect with people.”  Dixon said.

The amount of effort put into Dragstravaganza is a testament to the importance behind the event and the community it represents.

“Looking back at the roots of queer culture and queer rebellion, liberation, it started out as a form of resistance,” Dixon said.

Dragstravaganza is an event to kick off a week dedicated to highlighting the LGBTQIA+ community, and their importance in the community as a whole.

It is a time for students who identify with this community to come and feel that they are in a space that is safe for them to express themselves and be surrounded by others they can share experiences with.

Dixon elaborated on the spaces at Elon that are cultivated as open and safe atmospheres, including Spectrum and the Gender & LGBTQIA+ Center.

“If someone really does feel like they want to, like, get out of the box,” Dixon said. “And they feel like they need the space to have that, there are so many spaces on campus and groups of people that they can connect with and connect to.”

Dragstravaganza is one of Elon’s vibrant events, celebrating a group that is just as vibrant and full of life.

Though the event is intended to be a celebration, its recognition of the community holds a high level of regard.

Daie is a member of the Elon’s vast alumnus community and hosted Dragstravaganza in the past as a student.

Daie remained local with Dix, performing at The House of Coxx in Durham, NC.

"I just think it was great to see some representation because at Elon, there's like, not a lot of LGBTQ representation so we have like events like this, so I'd love to see like people do their make-up everyday," Ruiz said. "And just embrace their sexuality."

From the Elon community, four student performers were chosen by the GLC to perform at Dragstravaganza. Students auditioned for parts in the show, and those chosen each brought their best performance.

Friends came to support those performing, and greeted them with cheers and high energy. Support came also from Daie and Dix, who had kind words for each student following their performance.

Students who came to participate in Dragstravaganza were greeted at the door with a sign-in table that offered buttons, stickers and glow sticks to show support with the LGBTQIA+ community.

Music pulsated from the DJ, inviting students onto the dance floor. From pop hits to classic tunes, students were instantly transported into a celebratory atmosphere. Flags representing a number of sexualities and identities were hung around the room, openly celebrating those who identified with them. Tables in the back offered food and drinks for those who brought an appetite with their excitement.

Dixon shared her hopes for the celebration and how this gave the queer community the chance to be visible.

“We are here, we are gender non-conformed,” Dixon said. “We can all dance and have a good time.”

When Daie and Dix took to the stage, the excitement of the room hit an all-time high. The queens were joined by the audience in singing and dancing to their high energy songs throughout the night.

Daie and Dix took the time to interact with the audience both in performance and conversation. During songs, the queens would take to the floor, dancing with students and each other.

Students created paths and pockets of space for the queens to move freely. Every interaction prompted choruses of excited exclamations and students videoing the experience.

The queens held open conversations with the crowd, asking about a range of topics from song suggestions to the community at Elon. Questions were never left unanswered, and the queens responded enthusiastically to questions from the audience as well.

It was easy to see how much Daie and Dix cared for the audience on a personal level, expressing multiple times their love for Elon and those in attendance.

After the event, Daie and Dix took photos with students. They offered kind words for all those who came for a picture, thanking each student for attending.

Daie and Dix interacted on deeply personal levels with each individual, making all who participated feel welcome. This promoted an open, safe atmosphere for the entire evening.

Dragstravaganza acted as a celebration and an inspiration for the Elon community. It uplifted a community at Elon that contributes so much to the culture as a whole.

“A celebration of queer art and culture,” Dixon said to show that drag was more than a performance.

Dragstravaganza allowed an art that is not normally present to be expressed without fear. It became visible and bright for those who could appreciate and identify with it.

With the outfits, the make-up and the songs, there lies a deep meaning of expression that Elon’s culture is able to grow with.

Dragstravaganza is truly an Elon tradition that contributes much more than what is seen on the surface, and will continue to enrich Elon’s community.