The Phoenix will face the Bulldogs in Chapel Hill on Friday 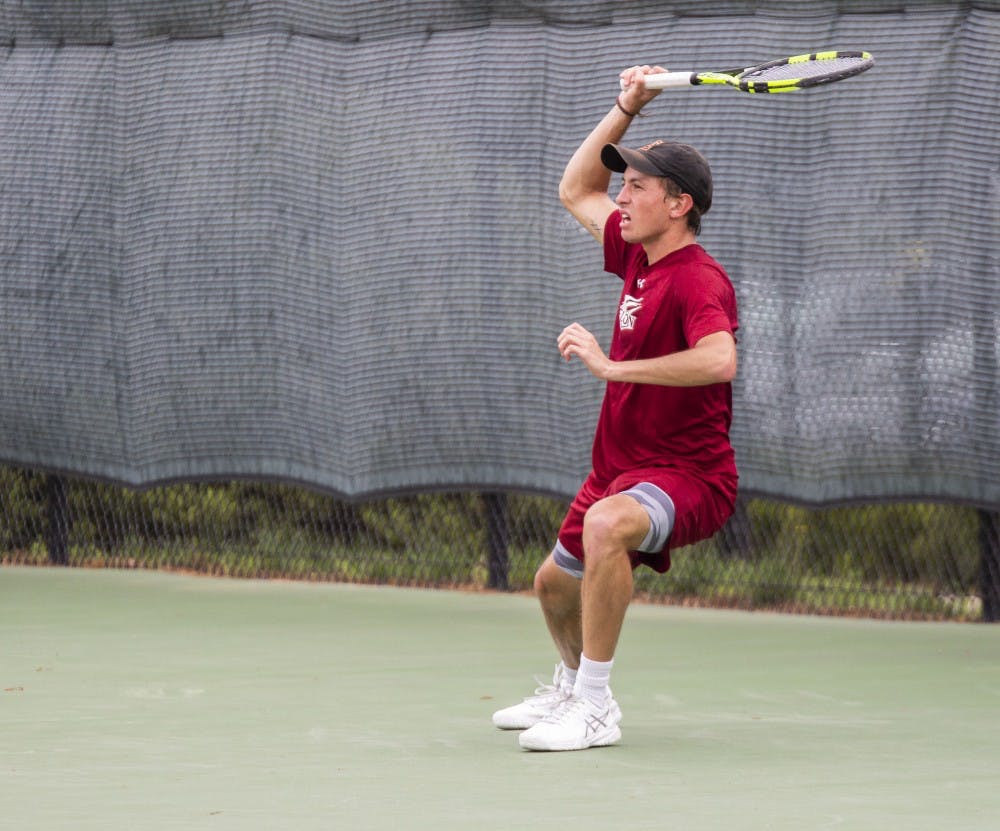 
Sophomore Camilo Ponce in action during the CAA Tournament Finals on April 20, 2019.

Elon University's men’s tennis team will play the University of Georgia in the NCAA Tournament, which kicks off this weekend. The team hosted a watch party in Schar Center Monday night, eagerly awaiting the reveal of their opponent.

CAA Champion Elon men's tennis will be facing University of Georgia in the first round of the NCAA Tournament. pic.twitter.com/JTZ8qWueGw

The Phoenix claimed the Colonial Athletic Association championship on April 20 after defeating the University of North Carolina Wilmington in the final match.

Sophomore Kyle Frankel, who was named Most Outstanding Player in the CAA tournament, said he is excited for the opportunity to play Georgia.

“We’re all super excited to play,” Frankel said. “We’ve been looking forward to this for the past week. Like right after conference. So we’re super excited for this opportunity.”

Despite the accomplishment of winning the conference championship, Frankel said the team is working hard toward making a run in the NCAA tournament.

“We were very happy to have won the CAA," Frankel said, "but after that, we all agreed we are going to work so hard for the next two weeks to do as well as we can against this next match."

“We feel pretty good,” Osses-Konig said. “I feel like at every spot, we have tough guys playing, and I think that if we scrap and we really fight hard, I think we make it tight and really cause an upset.”

The Phoenix will enter the NCAA tournament the No. 3 seed in its section of the bracket, and Georgia will play as the No. 2 seed. Head coach Michael Leonard said he does not know a lot about Georgia due to the team playing in a different conference, but Leonard praised Georgia’s men’s tennis program and its players.

“Right now, I don’t know a tremendous amount about them,” Leonard said. “I know they are talented and they’ve got a lot experience from previous years.”

The teams are set to face off at 1 p.m. Friday in Chapel Hill. Despite the short turnaround, Leonard said the team will try to prepare and strategize for the upcoming match.

“We’ll get some notes on and try to find out more about their players,” Leonard said. “Then we’ll try to put some strategic plays against them, singles and doubles.”