David W. Orr presents on "Democracy During a Hotter Time" for Earth Week 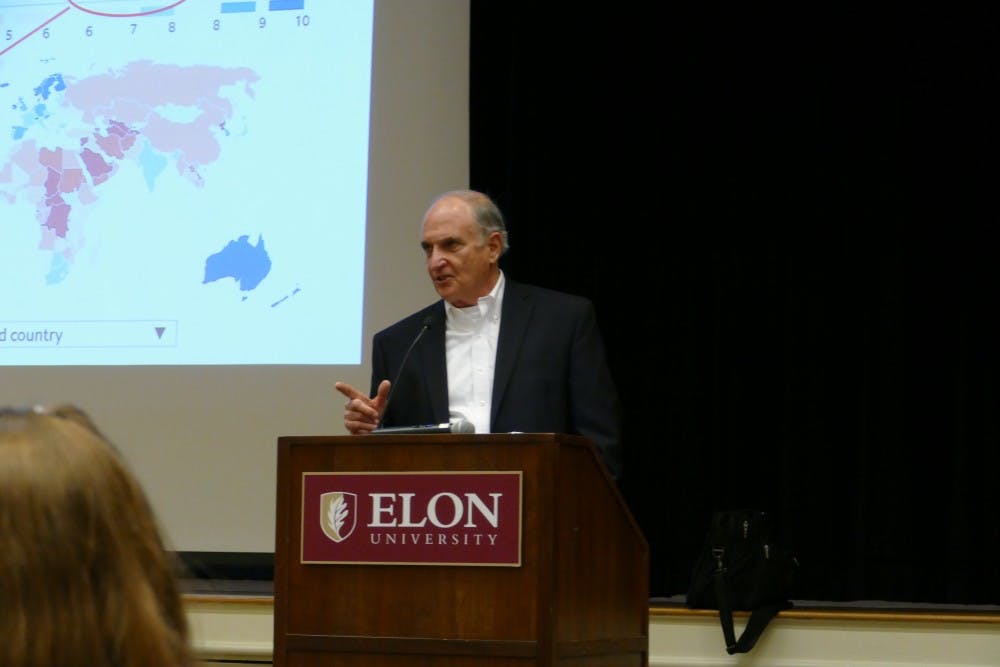 David W. Orr, Paul Sears Distinguished Professor of Environmental Studies and Politics at Oberlin College, spoke at Elon University Tuesday night in McKinnon Hall on climate change and the state of democracy in the United States for Earth Week.

Orr's speech addressed solving climate change, with the first step being to fix our democracy. He explained that people are increasingly becoming disillusioned with the idea of democracy. Orr acknowledged that U.S. democracy has never been perfect and said environmental disasters are due to government bodies not functioning as they should.

“Most all the muddy little footprints of any environmental disaster go back to a regulatory body that didn't do its work,” Orr said.

Orr emphasized that climate change is a fast-approaching issue that is going to affect multiple aspects of everyday life.

“When you turn the thermostat of the planet up and you find out all kind of other things happen," Orr said, "it affects food systems, it affects politics, it affects sea-level rise, it affects biological diversity in forests and so forth."

On a more optimistic note, Orr said people on both sides of the aisle are actually more similar than we realize. People across the political spectrum largely agree on the fact that climate change is a concern.

“If you consult public opinion polls and you ask how many people want clean air or clean water or stable climate and so forth, it's big majorities … and it's Republicans and it's Democrats alike,” Orr said. “Nobody gets up in the morning and says, 'I really want to drink some polluted water.' … Nobody thinks like that, so we are joined as people around a common concern for environment.”

“How did the words conservatism or liberal become such nasty words to each other?” Orr said. “Those are both good words, we need conservatives, we need liberals, we need the full spectrum.”

Even with democracy’s flaws, Orr still said he believed it was the best political system to put a stop to the earth’s warming.

“The burden is on us, it's hard to be in a democratic society, issues are tough," Orr said. "Climate change is one of a series of many issues we ought to be engaged in, but that means you and I have to do our homework as citizens and then trust the government."