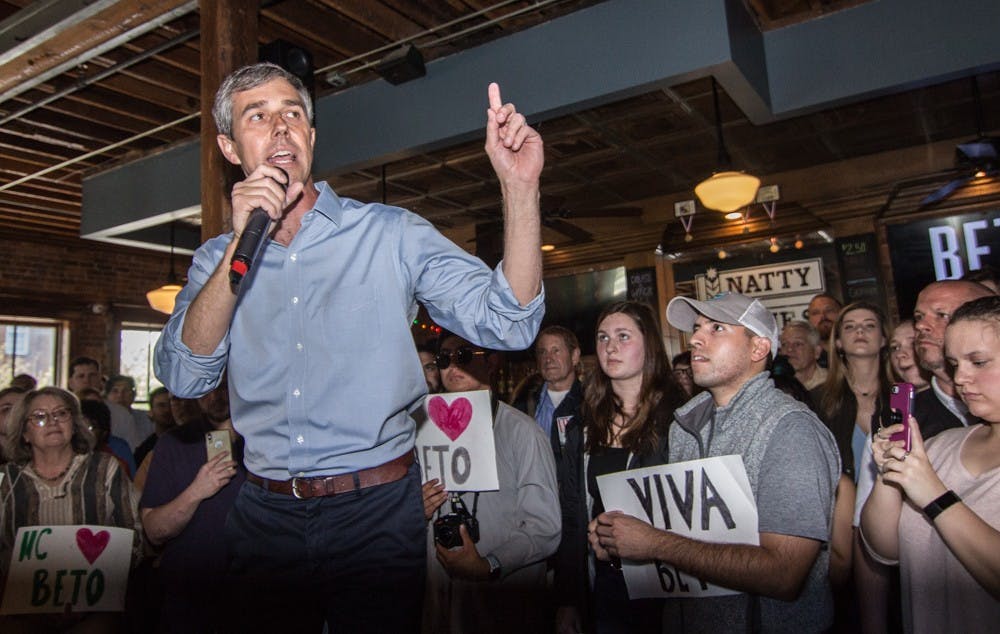 GREENSBORO, N.C. — Presidential candidate Beto O'Rourke spoke at Natty Greene's Pub and Brewing Company in downtown Greensboro. O'Rourke is among over a dozen Democratic candidates vying for the party's presidential nomination as the first primaries and debates approach.

Click below to listen to the audio version of this story.

On par with his intimate style of speaking, O'Rourke stood in the center of the upstairs bar area amidst the crowd of people to whom he spoke.

In the crowd were students and professors from University of North Carolina at Greensboro (UNCG), Elon University and residents of Greensboro and High Point.

He said laws in the country today prevent many people from being able to vote.

“This country calls for a new voting rights act that will not allow for voter ID laws to keep people out of the ballot box,” he said.

O’Rourke spoke up for the LGBTQIA+ community, reminding the state of the House Bill 142 controversy from 2013.  He also addressed one of the state’s gerrymandered districts that cuts through North Carolina Agricultural and Technical State University.

O'Rourke spent many minutes discussing education during the meet and greet. Forgiving student loan debt, according to O’Rourke, is especially important for educators. He said that teachers and public school staff who are doing the "most important job" — teaching — should not be burdened by debt.

He also said that educators should be paid enough to live off of their teaching job alone and should not have to work a second job.

“Whether they’re a nurse, a counselor, a librarian, work in the cafeteria, pick up as a custodian at the end of the day, drive those kids to school as a school bus driver or are the instructor at the front of the classroom, I want those public school educators focused on those children,” O’Rourke said.

O’Rourke spoke passionately about climate change and how it affected Southern states like North Carolina and Texas. He said it has caused "two 500-year storms in the last two years" in North Carolina — hurricanes Matthew and Florence. O'Rourke, contradicting President Donald Trump’s statements, said that there is only 10 years until it is too late to combat climate change before it is irreversible.

Chloe Yoon, freshman and majoring in the School of Education at Elon, asked O’Rourke how he would combat the “school-to-prison pipeline.” She was inspired to ask this question after her alternative spring break trip in Columbia, South Carolina and visiting elementary schools.

She said was excited to hear from O’Rourke today and believes he has a concrete plan in improving education.

"His vision toward education was very impactful towards me especially as a future educator," she said. "His plans to, first of all with student loans that's huge — he's attempting to cut that off, and then also making sure that teachers get fair wages."

O'Rourke also mentioned how inspired he was by the Greensboro Four, a group of African American men who sat at a counter in a chain lunch counter in 1960. At the time, African Americans were not allowed to sit at the counter. Their sit-in caused the store to end its segregation policy. O’Rourke made the claim the Four were able to “shock the conscience of this country” through their sit-in.

But Heather Blackburn, an active member of Democratic Party in High Point was not satisfied with his talking points today. Though she was excited to attend the event, she wanted to know what made O’Rourke different from the 17 other candidates running for the Democratic party.

“I was a little disappointed that I didn’t hear anything that set him apart,” she said.