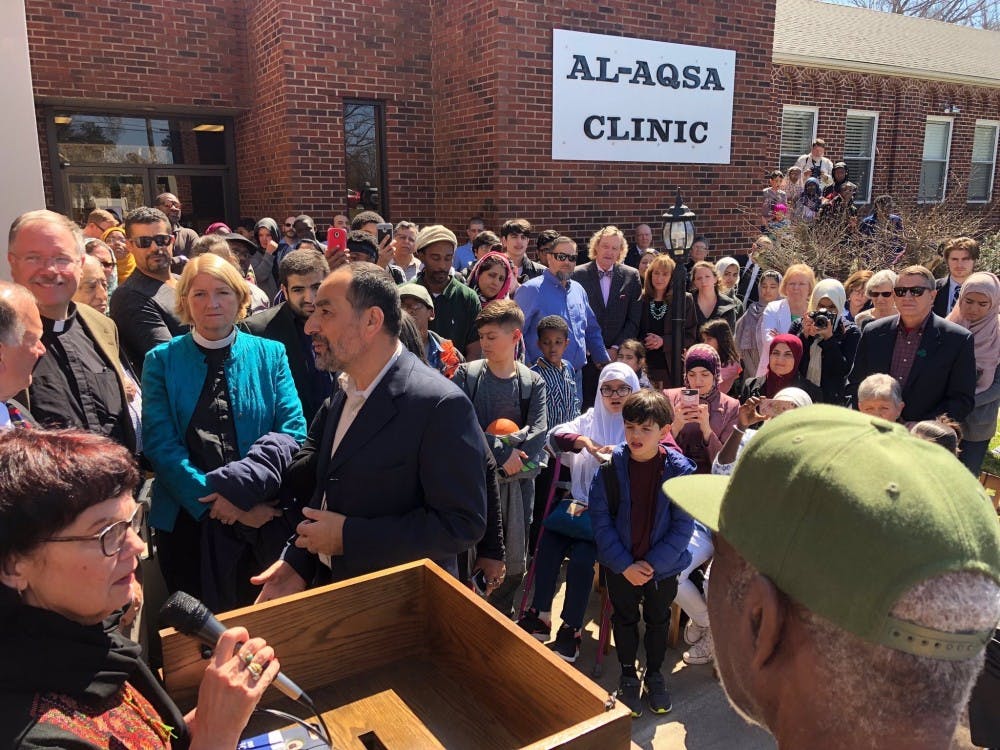 A crowd gathers at the Al-Aqsa clinic. Photo courtesy of Rep. Mark Walker

Religious leaders from across campus came together Monday afternoon to show their support for the Muslim community in the wake of the terrorist attack in New Zealand, where a gunman killed 50 people and injured 50 more at two mosques. Nearly every seat was filled in the Numen Lumen Sacred Space to reflect, pray and support one another.

Down the road in Burlington, the Burlington Masjid Mosque also hosted a gathering for the community Sunday afternoon. As soon as the tragedy began to unfold on Friday thousands of miles away, the Burlington Masjid — the only mosque in the county — started receiving calls from members of the community sharing their messages of support and concern. Representative Mark Walker and University Chaplain Jan Fuller were just two of the many people in attendance Sunday.

“It was very, very, very hard. It could be any one of us,” Khdour said. “And it’s not necessary to be Muslim, it is for any human being, just like to see that, to me, this is something that is not acceptable at all. It doesn’t matter, whoever done it, it doesn’t matter what is their reason for done it. This soul it is given from God, and is the only one who can take it is God — not anyone else.”

The Burlington Masjid Mosque opened about five years ago and now has close to 200 members. Khdour said their congregation is a diverse group hailing from various countries. Since even before the mosque opened its doors, Khdour said there has always been a strong relationship with Elon University. She said each week there are multiple students who attend services.

Javed Masoud is a member of the mosque as well as one of the doctors who serves at the Al-Aqsa Community Clinic, which is run out of the Mosque and provides free healthcare for people who do not qualify for health insurance. He has been a supporter of the mosque for as long as Khdour.

“I think we are sad,” Masoud said. “But there is a good support from local churches — Jewish synagogue, Christian churches. With the support system, we feel better. We are not angry. We are not afraid. Because with anger and fear, you cannot solve any problems. So as long as the community is together, we can work out a solution.”

Shane Atkinson, Muslim life coordinator, said the Chaplains are “always available” to students and this service was a way for the community to support Muslims on campus.

"We wanted to give people a space they could come together, support each other and help each other move toward healing."

“We wanted to give people a space they could come together, support each other and help each other move toward healing,” Atkinson said.

With offering support to those in the Elon community, Atkinson recognizes that Muslims can feel uneasy after tragedies such as the one in New Zealand.

“I think Muslims across the country are on edge and worried,” Atkinson said. “And some people feel traumatized, you know, especially if you look. If people can look at you, if you’re visibly Muslim, then you would definitely be more on edge because there’s always concerns that people are going to start copycat incidents of this.”

Atkinson said even his own children were concerned about a shooting, recalling they had trouble sleeping Sunday night after seeing the police at Sunday school.

“The seven year old was wondering if someone was going to come shoot me, so you know it’s real to be concerned that these acts may spread,” Atkinson said.

Leading the congregation at Numen Lumen in prayer Monday afternoon, Atkinson recited in Arabic the opening prayer located in the first chapter of the Quran. The crowd began saying the prayer in English as it was repeated again.

Along with prayer from the Muslim faith, Jewish and Christian religious leaders offered prayer in solidarity with the Muslim community.

Rabbi Sandra Lawson recalled the gathering of friends that took place in fall 2018 after the shooting at the Tree of Life Synagogue. She said she prayed “that this is the last time we will have to gather.”

The crowd rose, and heads bowed as Lawson recited the Jewish Mourner’s Kaddish.

Fuller also offered a message of love and unity at the gathering of friends, reciting a prayer from the Christian faith.

Junior Noor Irshaidat, who identifies as Muslim, said the event helped to try and process some of the emotions she has been feeling.

“There is a lot of pain that we feel,” Irshaidat said. “And that I feel especially as a Muslim student away from home. There aren’t a lot of us here. But it was really good to see the community come together to process what happened and try to emphasize the common things that we share and support each other and be there for each other and see how we can go forward from here.”

According to the Elon University Factbook, 17 undergraduate students identify as Muslim. Irshaidat said moving forward, she hopes to continue to spread awareness about her own religion and traditions.

“It’s mostly trying to be ambassadors of our tradition and showing people, raising awareness that Islam is not about hate,” Irshaidat said. “It’s about love and about peace and trying to highlight that, share our knowledge with other people and see how we can help and be the best ambassadors we can be for our tradition.”

During the service, Atkinson offered a message of hope to those in attendance, telling them to stay faithful and keep to their morals. He said good and evil were not equal and encouraged everyone to do good.

Rachel Ellis and Hannah Massen contributed to the reporting of this story.