Brodt reflected on his survival experience in front of a packed LaRose Theatre. 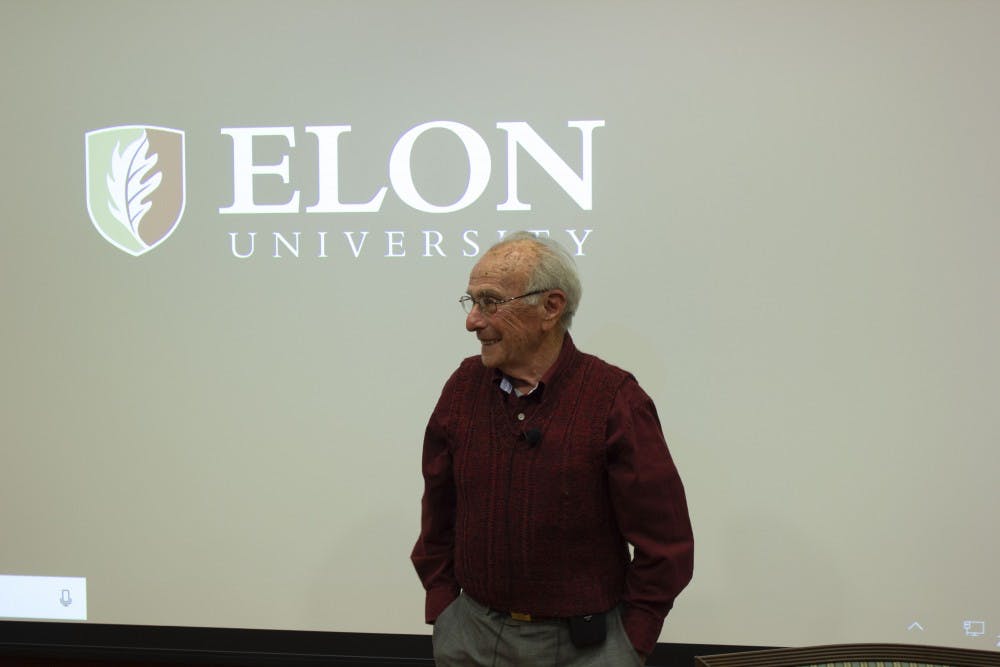 Holocaust survivor Hank Brodt visited Elon University’s LaRose Theatre last night to share his story of survival from his time inside not one, but five Nazi concentration camps.

Though Brodt’s story is one of resilience, he shared several unsettling details from his experience.

Brodt had just passed the seventh grade with “flying colors” when his native country of Poland began to feel the effects of World War II in 1939. Brodt and his family were forced to live in a Jewish ghetto, which grew smaller by the week.

Brodt described being sorted into two groups by Schutzstaffel (SS) officers: one would remain in the ghetto, and the other would be taken away to the concentration camps.

“Go to the left, you go to the railroad station,” Brodt said. “Go to the right, and you have time to live a little bit longer.”

“We didn’t sleep twice in the same bed knowing what happened to the rest of the family,” Brodt said.

But once Brodt boarded the crowded railroad car, he was bound for years of hardship. Though he was forced to perform hard manual labor, Brodt was often given a little more than hot water and bread crust to sustain him. He witnessed firsthand what the Nazis did to the imprisoned people, including mass shootings and untreated illnesses.

Brodt was liberated in 1945 and was sponsored by a U.S. Sergeant to move to the United States. Brodt found work and started a family, but didn’t speak of his experience for 26 years.

Then Brodt's rabbi asked if Brodt had ever heard of March of the Living, an annual educational event held in Israel and Poland to study the history of the Holocaust. Brodt became a participant, and he decided it was time to tell his story.

Brodt’s speech was co-sponsored by many on-campus organizations, including Elon Hillel and the Truitt Center, all of which contributed toward a donation for March of the Living.

The crowd of students, faculty and community members far exceeded LaRose Theatre’s seating capacity. Rabbi Sandra Lawson was pleased to see so many students stay for the duration of the speech, and she hopes that hearing Brodt’s story in his own words was an impactful experience.

“Being here tonight and hearing Hank's story was truly unbelievable. Having traveled to some of the places that he unfortunately had to endure, that only made it more emotional for me tonight,” Feuer said. “The most emotional part for me was hearing him talk about all of the mind-boggling things that he had to go through, then hearing him sing and watching his face, that smile and his radiating personality. That’s what it’s all about.”