Local parish bridges past with present, expands connections on campus 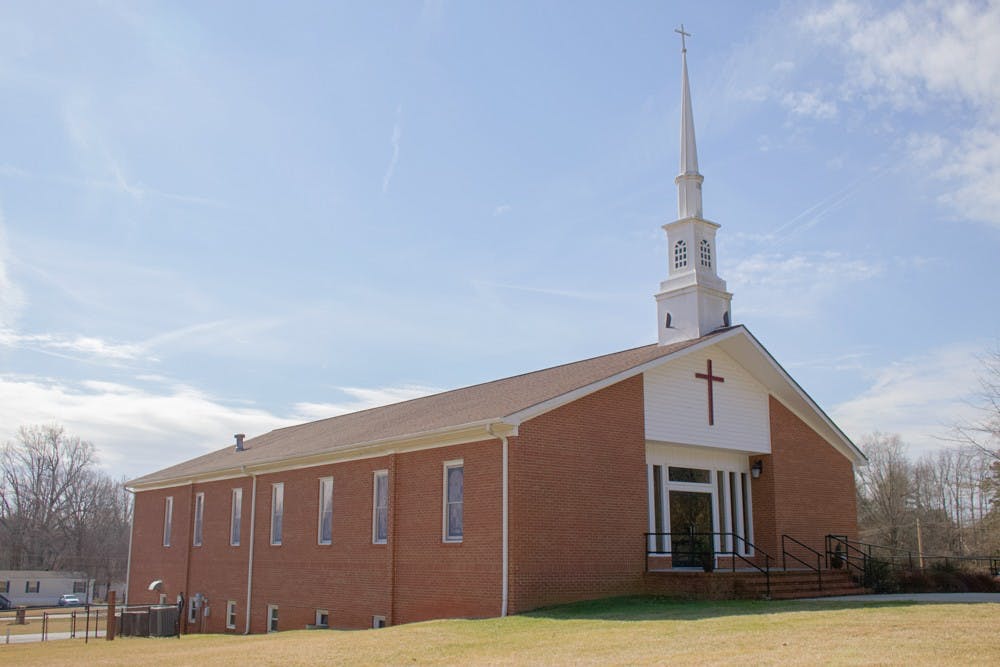 Elon First Baptist Church has remained a part of the Morgan Place Community since 1922. [Cory Weller}.

On a Sunday morning late last semester, more than 20 Elon University students and faculty linked arms in solidarity during the final blessing at Elon First Baptist Church (EFBC). Flashes of maroon and gold bounced across the room alongside flecks of Carolina blue as the majority of the congregation sported a myriad of college apparel. College Day, EFBC’s annual celebration of higher education, is a Sunday service dedicated to emphasizing relationships with Elon and other neighboring collegiate institutions.

Pastor James Wilkes, who has been at EFBC for two years, wore his Wake Forest University sweatshirt in honor of where he received his divinity training.

But Elon junior Xavier Bryant did not wear his college gear for the service. Dressed in a coat and tie, Bryant knew he had to make a positive impression for EFBC in his newfound role as the church’s college deacon. From start to finish, Bryant directed the entire service.

“It was different because [Wilkes] gave me a leadership position for [College Day],” Bryant said. “So that’s kind of cool, knowing I go somewhere [at EFBC] that’s so welcoming to where they give me a part of the church. They make me feel like I’m really needed.”

The Elon Gospel Choir, a student-run choir group on campus, sang “Way Maker” by Nigerian gospel singer Sinach. Wilkes praised the congregation’s attendance with the addition of students. But between the Beyoncé references and themes of self respect throughout his sermon, Wilkes ended the service on a serious note.

“I want to apologize publicly to the students of this university, publicly to you all,” Wilkes said. “We have not done a good job of creating relationships with you all. … It is our responsibility to to make sure that we cover you all while you are in school. If you need something, you can come to us. So I apologize on behalf of our entire church, and I want you to know that things will get better. And we will create relationships, intentional relationships with you all.”

That relationship comes with geographical and emotional barriers. Situated about a mile south of Elon’s central campus, EFBC is nested in the middle of Morgan Place, a historically black community formerly utilized as a source for cheap labor during the Cotton Boom.

In blood and spirit

According to research by George Troxler, retired Elon professor emeritus and historian, the settlement of Morgan Place preceded the founding of Elon College in 1893. Troxler believes the location of the neighborhood was an ideal place for black labor to be outsourced for work in the textile mills. Because the neighborhood was and still is southwest of the railroad tracks, a railroad station called “Mill Point” was created in 1881 due to its central location between cotton mills in the area.

Following Elon College’s establishment by the United Church of Christ in 1881 and eventual charter eight years later, the college required a source of laborers. Today, members of the community still work for the university even though the makeup of the area has changed in light of the relocation of the cotton industry.

EFBC was founded by John McMullen, a former slave-turned-preacher. After purchasing the new land and gaining his freedom, McMullen was able to build the church using wooden planks before remodeling the church with bricks in 1923. McMullen died in 1925 after a hunting accident.

Despite the church changing leadership, the significance of the church still remains ingrained in its history for the Rev. L.D. Summers and Deacon Board Lawrence Slade.

Summers, a retired probation officer, grew up with Sunday school taking place in a small wooden “hut” next to the brick church every week. One Sunday service was held in EFBC every third week of the month, meaning Summers would often travel with his family to attend services at the Rev. Sandy Gilmer’s three other local congregations.

Slade, 73, owns L&M Barber Shop in Burlington. Between his lifelong work as a barber since he was a teenager and his 20-year tenure on the Board of Aldermen for the town of Elon, the tradition of going to church was a family affair. During his upbringing, he noticed that an overwhelmingly large proportion of the community was related by either blood or marriage. As a result, the church became a community of familial ties.

“We walked to church. We’d meet up with different families on paths,” Slade said.

Though seemingly insignificant, the multiple paths created by families (as there were no constructed roads in Morgan Place at that time) met up in worship. The church was not merely a spiritual meeting ground. It was the community and still is, according to Summers.

“I’m a lifelong resident of this community, and all of my spiritual needs are here,” Summers said.

As EFBC grew in size, it needed to rebuild its place of worship and connection with the college, signifying a second era of change.

While Elon College hosted EFBC services in Whitley Auditorium until the church was rebuilt in 1990, EFBC did not do any direct programming with the college until the Rev. Keith McDaniel assumed his role as pastor in 2005. After taking the helm, he immediately decided that EFBC needed to work with the university.

To accomplish this, McDaniel designed outreach initiatives that encouraged partnerships with groups on Elon’s campus that could also benefit from working with EFBC. The church partnered with Elon’s student gospel choir to incorporate outside voices in EFBC. McDaniel also established several informal-themed services, including College Day, while adding 10 new ministries.

Sunday services were extended to two instead of one. Slade described the services as “packed.” Communion was added to both services, and turnout of the Elon University community was at higher levels.

“When Lambert came, he kind of supported this community,” Slade said.

According to EFBC’s website, the project “Heal the Land” was established in 2008 by McDaniel, involving a day of tree-planting between EFBC and Elon University. The following year, the project culminated in the planting of 1,600 oak trees in parks around Alamance and surrounding counties. Besides planting trees, a handful of Elon students from the Center for Environmental Studies shared sustainability tips with EFBC congregation members.

While EFBC has approximately 360 total members in the congregation, most of the church population today comes from outside of Morgan Place.

When she moved to Greensboro from Philadelphia over 10 years ago, Yvonne King was an outsider seeking comfort in faith. King, who is currently retired from the Greensboro school system, discovered EFBC through one of her friends’ sons. Bypassing services at the nearby Mt. Zion Baptist Church, King drove 19.6 miles to attend EFBC for the first time.

She has never considered attending another church since.

Currently, King is an associate minister of the EFBC, studying to obtain her master’s in divinity online. For her, the most important part of incorporating community within EFBC involves reaching out to students at Elon, similar to her own ability to find a home at the church.

Bryant also found EFBC a comfort in times of change. During the spring semester of his freshman year, he felt like he was missing something from his hometown of Roxboro, North Carolina. At a predominantly white institution, Bryant, who identifies as black, decided he needed to find his community. After reaching out to Marilyn Slade, daughter of Lawrence Slade and program assistant at the Center for Race, Ethnicity and Diversity Education, Bryant was invited to join a Sunday service at EFBC.

“I went [to EFBC], and I felt like I was just at home. It was like my home church away from home,” Bryant said. “I felt like I had that connection. I wanted to be faithful while in college while also do it on my own, not because my parents told me to.”

As a result of his experience freshman year, Bryant drives students to EFBC in his Ford Explorer on Sundays. He feels it is his duty to spread the word about the church and bring more students into the church who are looking for a community surrounded by faith.

Besides involving students, Bryant also says he wants EFBC members to feel connected to Elon as much as possible.

“If I was able to help first-years find that home early, then they wouldn’t have that trouble that I did in the beginning, then that would be great,” Bryant said. “We’re possibly starting a Bible study, starting like a little chat session with Elon First Baptist just so they can have a little more of that connection,” Bryant said.