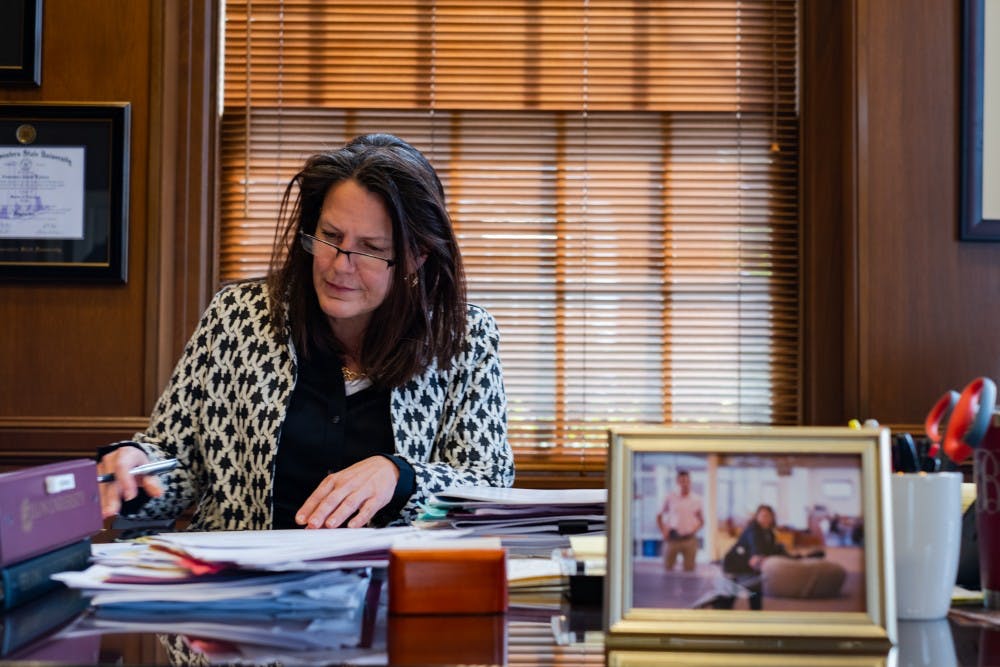 Connie Book tried to not tear up.

But her voice still cracked and her face reddened a little against her white and black patterned jacket.

March 1 will be her one-year anniversary as Elon University’s president — a year that definitely had its obstacles. Two hurricanes and a snowstorm blasted campus. Provost Steven House, her second-in-command, announced his retirement. And an aggravated adjunct faculty grabbed signs and publicly protested their stance with the university, saying they seek higher pay and stabler jobs.

But when asked, “What was the hardest part of your year,” she didn’t list those things first. Instead, it was something few knew about.

“We had a freshman who had a head injury over Thanksgiving, and his life was in the balance,” Book said. “So I called his parents and spoke to them because it’s important for those families and for our students and alumni to know that we're thinking about them and that they’re a part of us.”

Book understands the job of a college president. She’s trained for it, having climbed Elon’s administrative ranks for 18 years. Her two years spent as The Citadel’s first female provost also primed her. But speaking to grieving families, such as the families of that hurt student and the two Aramark employees who died this year, truly showed her the scope of her responsibilities, she said.

“The work of president is about people — that community-building piece and how important that can be in times of distress,” Book said. “So that has been a surprise to me, but I’m grateful to be able to do that.”

As the spring semester starts, Book said she’s still learning. One year of experience won’t teach her everything she needs to know — the average Elon president serves for about 15 years. But she’ll use the lessons from the past 365 days to guide her as she makes decisions that will affect Elon for decades to come.

Book’s No. 1 priority is to stay ready.

Once news broke of Virginia Gov. Ralph Northam's blackface controversy, she called the university from the back of a taxi cab in New York City asking archivists to inspect the Elon's old yearbooks. Additionally, because of the severe weather last fall, Book suggested squeezing more buffer class days in the semester calendar. When the unexpected happens, Book wants to be prepared.

But sometimes, she was still caught off guard.

On Nov. 29, 2018, adjunct faculty filed a petition with the National Labor Relations Board to form a union. With choreographed chants, costumes and signs, faculty members marched to the president’s office with a letter asking Book and House to remain neutral. Five days later, Book sent an internal email claiming a union wouldn’t be in Elon’s best interest.

Book said she can’t remember a time when Elon’s faculty felt so “disgruntled.” She also said they never addressed their claims through Academic Council, a faculty committee tasked to formulate policies regarding different issues for approval or disapproval of the general faculty.

The timing of the union "absolutely" intentionally aligned with Book becoming president, she said. The Service Employees International Union, the outside party helping Elon’s adjuncts organize the vote, did the same with Duke University shortly after its new president took office in 2017. It’s disappointing, Book said, that she couldn’t answer these issues herself.

“In a lot of ways I feel like, 'You're paying me to be the president, at least give me a shot to do it.' That's my job."

The NLRB will announce vote results March 12 when the ballots have been counted. Then, she’ll assess how to handle the issue moving forward, she said.

“One thing I said to the faculty is that one thing I share in common with the union is that I want the best working environment or our adjuncts,” Book said.

The key player to all faculty is the provost, and Elon is currently in the hunt for one.

House announced in December he’s stepping down as provost at the end of 2019, but he will still serve in his executive vice president role. Provosts lead all academic operations of a university, including hiring faculty and approving curriculum changes, among other things.

Book originally kept continuity with her team to avoid such a harsh transition. But a change in leadership naturally presented opportunities for senior staff to shuffle over time.

House, who’s served as provost for 19 years, told her he’d stay on board for her first year to help ease her transition before retiring. Brooke Barnett, associate provost for academic and inclusive community, unexpectedly accepted a position as dean of the College of Communication at Butler University. Book also hired a new chief of staff, Patrick Noltemeyer, while promoting Jeff Stein to vice president for strategic initiatives. Now settled in her role, Book said she’s excited to add different faces to her administration.

“New people bring in different energy,” Book said. “Our culture has a lot of longevity, and I think that allows the university to have a long vision and take steps consistently.”

Book recently announced the search committee for the new provost, and listening sessions are ongoing. After the search committee vets and interviews candidates, Book said she hopes to invite three to four finalists to campus in May for open forum presentations. A decision, she said, should happen by early June. Book said a job description will be posted after the listening sessions. Most importantly,  she wants someone who aligns with Elon’s mission.

“One quality I want is for them to embrace our model,” Book said. “Somebody who really values the experiential and the engaged learning and how we've built a deep infrastructure at the university for that.

“So I want a leader that can bring a great learning asset and a provost who values that and is going to be a great champion for that."

As many changes as Book has faced throughout the past year, her morning routine has been one thing that has remained constant.

The phone calls and emails can wait. So, too, can catching up on overnight news. First and foremost,  she spends 30 minutes praying and having spiritual reflection. Praying reminds her that she’s "not alone in this,” and it gets her ready for whatever the day has in store. As she starts year two, she knows things will get stressful. But as long as she remembers her job is about the people, she says she’ll get through it.

“I think a moment of success is when our whole community is coming together,” Book said. “One thing that's really clear to me in the work is that it is about people — about the development of people, about relationships. I'm most proud of that kind of moment when our community is operating together and really reflecting the Elon values and the hope is that we continue to have that for the future.”