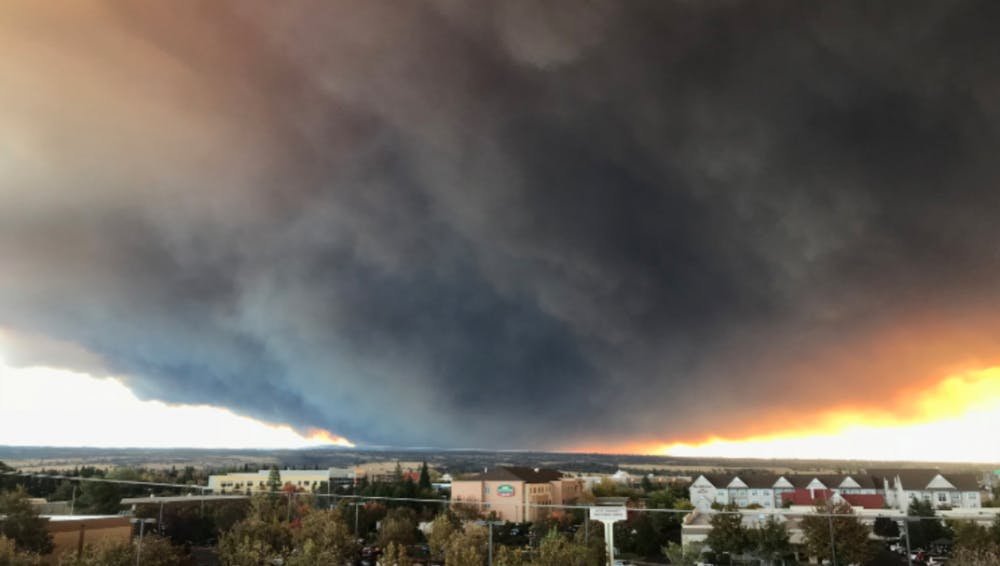 California wildfires burnt down homes throughout the state for over two weeks. California’s weather patterns are consistent with climate change models. [Tribune of News Service]

Last Friday, the U.S. government published the National Climate Assessment supporting the claim that global warming may cost the U.S. economy hundreds of billions of dollars per year, kill thousands of U.S. citizens and potentially lead to the extinction of some species of animals and plants. President Donald Trump continues to deny rising temperatures and claims that fighting the threat will only harm the economy. Janet MacFall, professor and chair of the department of Environmental Studies, explains the report’s implications.

Q: Can you explain what the environmental report that was released last Friday is and what some of the main points of the report were?

A: It’s a report by NOAA, which is a federal agency under the Department of Commerce, describing the scientific background for understanding global climate change and particularly focused on the United States. Greenhouse gases from human activities are extremely likely to be causing changes in climate. The amount of greenhouse gases in the atmosphere today is higher than it has been for the last 2.5 million years. We’re seeing climate today that is being recorded as being different from climate on earth for the last 2,400 years. And the scientific community is very much in consensus that it is very, very likely caused by human activity.

Q: Why was this report released, and how does it compare to the one in 2014?

A: It’s very consistent with the results that were reported four years ago in 2014. The main difference is that the certainty of the conclusions from the scientists is much higher than it was four years ago. So that there’s very, very little uncertainty about the effects of climate change and that it is caused by human activities putting greenhouse gases into the atmosphere. The conclusions are pretty sobering that our average temperature has increased about 1.8 degrees Fahrenheit over the past 15 years and they’re predicting as much as an 8-degree Fahrenheit rise by the end of the century if there is no change in the way we do greenhouse gases.

Q: What steps can be taken by the government, corporations and individuals to reduce their environmental footprint?

A: Many corporations actually have taken pretty significant steps in reducing greenhouse gases. This is going to sound really unbelievable but Walmart has actually been a leader in trying to reduce environmental footprints with greenhouse gases. Most of the greenhouse gases are coming from energy generation, from cars, and generating electricity through coal plants and burning natural gas. … We need to move towards renewables that are not greenhouse gas producing, and how we do that will be influenced a great deal by government incentives and by government regulations. … I’m trying to find ways to generate electricity, and moving towards an electric-based energy economy is really, really important. There may need to be more incentives for moving us in that direction rather than incentivizing oil production and incentivizing coal production.

Q: Are the current wildfires in California a result of climate change?

A: The scientists can’t say definitively that the fires in California are a result of climate change, but what they can say is the pattern of drought and the pattern of increased temperatures that California has experienced is consistent with climate change models. ... As we hear our federal government talking about we can’t afford to move to renewable sources and to reduce greenhouse gas production, it’s a false economic argument because we’ve already lost over a trillion dollars in economic costs and that’s just in the last 15 years. And these costs will only continue to escalate.

Q: Is the United States capable of making these drastic changes?