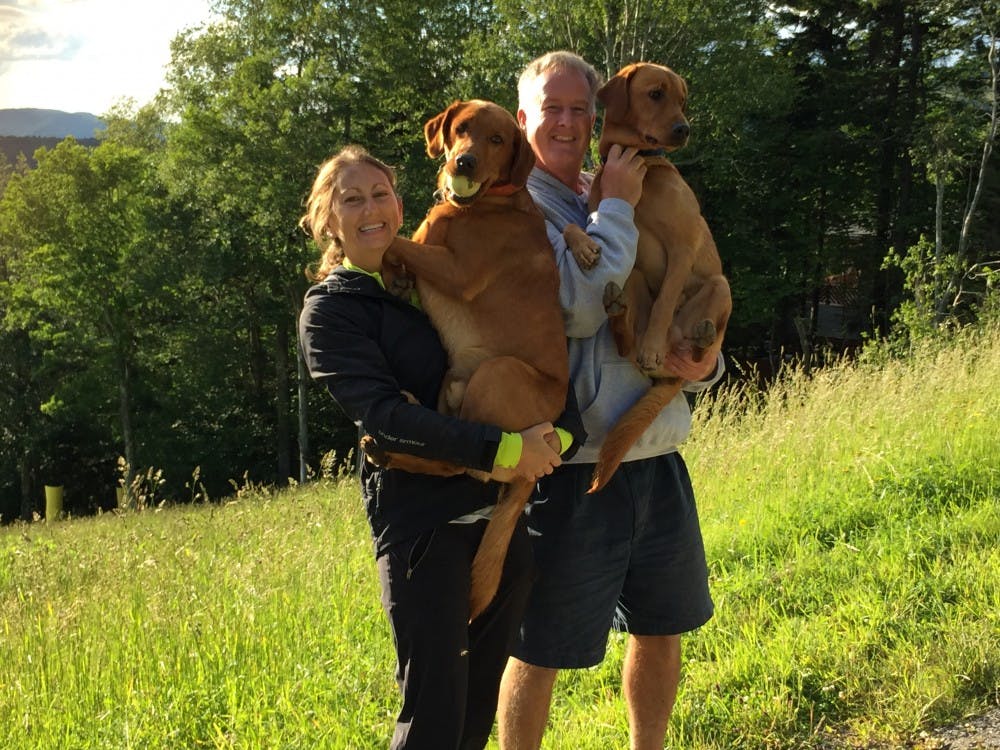 On a typical day around campus you might see students rushing from one class to another, golf carts driving around and tours strolling through campus.

But there is one campus constant that you might not have noticed. Most students know them as ‘those two red dogs who love to play fetch’, but their owners know them as Remy, 6, and Tully, 2.

Platania, who is the associate dean of the Love School of Business, and her husband Jim Ayersman, a sixth grade teacher at Turrentine Middle School, walk them through campus every day and have been for over 13 years.

“For me it’s kind of a nice way to get out of my office and interact with students and sort of see campus in a different way,” Platania said.

The tradition started with their black lab, The General, then adding Remy, a type of Labrador retriever, and finally adding Tully once The General passed away. Platania and Ayersman started walking all their dogs on campus as puppies.

“You can imagine how hard it is to get around campus with an 8-week-old puppy,” she said. “Everyone says, 'Oh, it’s a puppy!’ One time we were walking around and a flood of students said one time, ‘Oh my god, that’s the puppy I saw on Snapchat!' Like, what? That’s so weird.”

Platania said their family has always been a two-dog family and they have always had labradors because they love the breed.

And while both Remy and Tully look very similar, Platania says there is one surefire way to tell them apart.

While Tully’s unusual name comes from the main character of one of Platania's favorite books, "A Salty Piece of Land" by Jimmy Buffett, Remy is named after Remy Lecluse, a skier who was killed in an avalanche.

“Jim and I both love to ski. We are big snow skiers so when we knew we were getting Remy we were watching the news and there was actually a story about this guy Remy Lecluse,” she said. “We were watching this story on his life and it talked all about how he was this big adventurer and really happy-go-lucky and loved life and loved to travel and loved adventure, and the whole story just sounded like a puppy.”

Platania says one of Remy and Tully’s favorite activities is to play fetch with students on campus.

“My sister in law was playing fetch with him and thought you know I’ll count and see how many times he’ll go. She got to 96 and then she stopped,” Platania said.

But recently they have only been able to take Tully out for a stroll through campus.

As they took their standard route through campus one Thursday night, Remy ate a corn cob off the ground. He was throwing up that night and into the next day, so Platania took him to the veterinarian on Friday. The vet took an X-ray, didn’t see anything serious and sent him home with anti-nausea medication.

“Honestly it’s not unusual for the dogs to...get into something occasionally, their labs they love to eat, especially garbage. I thought he had just gotten into something,” Platania said.

“Early morning he was still getting sick and to get sick through the anti nausea medicine is pretty serious so we took him to NC State veterinary hospital,” Platania said.

There they found out that Remy’s small intestine was swollen, full of gas and completely blocked. He was then rushed into emergency surgery where the surgeon removed the corn cob from his intestine.

“They were honestly not shocked to see a corn cob. They were like, ‘You know, that’s not unheard of.' Socks are also apparently a very common thing for them to eat as well. The surgeon actually said, she’s like, ‘Yeah, I pulled a whole bra out of a dog’s intense once’,” Platania said.

After surgery, Remy was brought to recovery, but Monday night, Oct. 23, Remy needed a second emergency surgery because he had developed sepsis. Sepsis is caused when your body’s reaction to infection damages your own tissue. In Remy’s case, his sepsis caused his incisions to leak and a small part of his intestine to die.

“Remy is usually pretty particular about the garbage he ingests and I’m shocked and it seems unreal to me that this is all happening because of something he ate,” Platania said.

According to Platania, after having two major surgeries Remy’s prognosis was about a one-in-two chance of survival.

“He’s a relatively young dog and he’s a strong dog and a pretty healthy dog, so we are hoping those will all play in his favor,” she said.

But ever since that first surgery, Ayersman and Platania have not been at ease.

“Honestly, we are petrified,” Platania said. “It’s hard to think about anything else and we just wait for updates and we have to be strong for him because it’s no good to think bad thoughts. We are just trying to stay positive and think about him coming home.”

Platania says for her, her dogs have always been part of her life and part of her family.

“They’re our children, I mean we don't have kids of our own, ... so these dogs are like our children,” she said. “Which is why we are so heartbroken about what’s happened to Remy. If we can’t go somewhere and bring the dogs we probably won’t go.”

As of Friday, Oct. 26, Remy wasn’t better yet, but Platania and Ayersman remained positive.

Finally, on Oct. 27, the couple got some good news. Remy was still in the hospital but feeling better and finally able to walk.

Three days later, they were able to take Remy home with Tully and the rest of his family.

By Nov. 3, Remy was running around the house and Platania and Ayersman were hoping to start leash walking him again later that week.

As of now Remy is almost back to his normal self. His staples and feeding tube have been removed and while he has to remain on a leash for awhile he is back to enjoying walks around campus.