A diverse Homecoming court represent plethora of causes and organizations 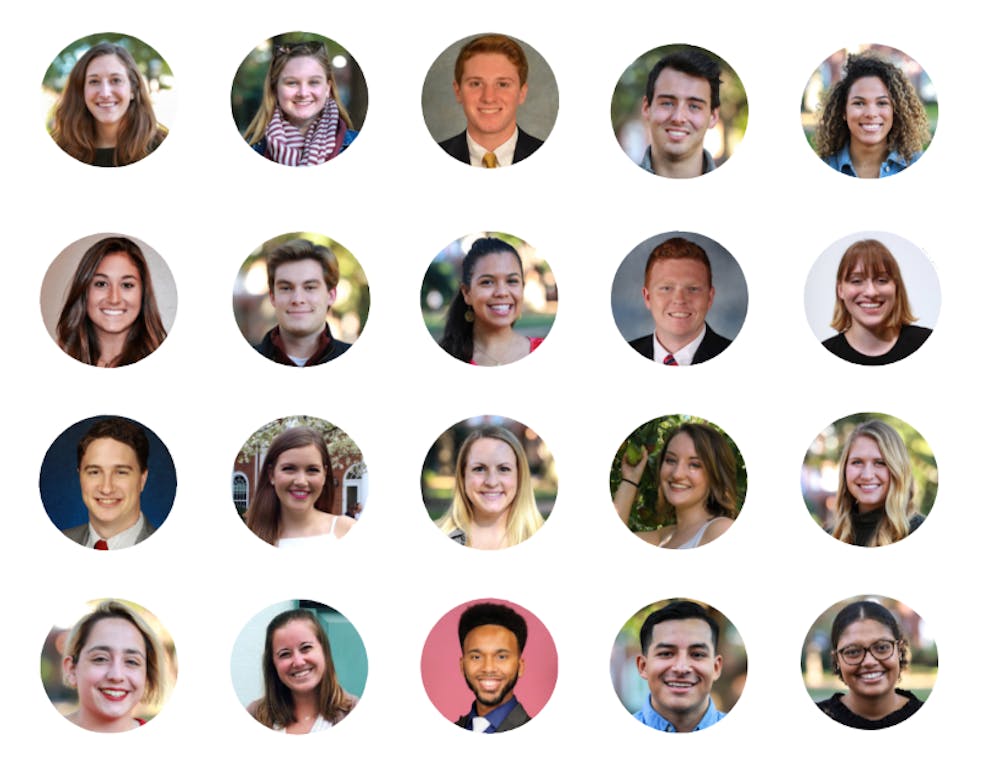 The 2018 nominees for Homecoming Court

This year, Elon University’s Homecoming will be celebrated with a diverse Homecoming Court of seniors, each as unique as they are committed to their cause. A group of 20 students — five males and 12 females — have been nominated to represent their organizations, class and Elon as a whole as members of the court.

A monetary prize will be awarded to the two students elected Homecoming Royalty, who will then donate the money to the philanthropy of their choice. This is the third year the SGA will follow a more inclusive model for Homecoming Royalty that will elect the two candidates with the most votes — regardless of gender identity. Homecoming Royalty will be revealed at the Homecoming football game Saturday, Nov. 3.

Two of the court’s members, seniors Mary Kennedy and Olivia Warhop, said they were immediately excited to have been nominated. Kennedy called her mom to break the news.

“I told her, and I think she started to cry over the phone,” Kennedy said. “I was just very happy to be a representative of the senior class and this school because I couldn’t love Elon more.”

Because Warhop’s all-girls high school didn’t have a homecoming, she was happy to be a part of her university’s homecoming.

But being nominated came as a surprise to some of the court’s other members.

Senior Jazmine Langley from Raleigh, North Carolina, said she never expected to be recognized for her work in Elon’s diversity and inclusion programs.

“I was surprised, just because I’m more concerned with my work on the ground and the work that I’m doing and less concerned about being recognized,” Langley said. “So, when I was chosen I was like, this is kind of uncomfortable but nice.”

Senior Matt Sullivan was just as confused to receive a nomination.

“I was a little confused because my friend Evan also applied for the court, and he was originally not on the list, and I was like, ‘In what backwards world did I get nominated and he didn’t?’” Sullivan said. “But then he got on, so it was kind of funny.”

For senior Diego Pineda, running for Homecoming Court was a chance to also represent the Latino community as he said he believes their presence isn’t “as known” on campus.

Nearly all of the Homecoming Court members are involved with campus organizations — in roles spanning from leadership, volunteer and paid positions in a variety of departments. For many of the nominees, at least one organization is particularly meaningful to them.

Senior Lauren Ventresca, a Teaching Fellow who works with Elon Academy, said she “really wanted to help [Elon Academy] because that’s a local cause, and it’s great then to see some of the kids come to Elon and see them have opportunities that they wouldn’t have otherwise had.”

Senior Mary Kennedy, who is both a member of a sorority on campus and part of the Panhellenic Association executive board, has spent much of her fall semester coordinating applications, events and recruitment counselors for the upcoming sorority recruitment.

Senior Hope Keone said she is passionate about her work with the Students Promoting Awareness, Responsibility, Knowledge and Success (SPARKS) program.

“SPARKS is like my community,” Keone said. “My group of people, where I’m able to talk about the things I am most passionate about because I’m so passionate about health — especially reproductive health rights — and SPARKS inspires me to pursue what I want to do in a really meaningful way.”

Whether connected to their philanthropy through a campus organization or a personal experience, all the nominees are dedicated to their causes of choice.

Like Koene and Langley, senior Katie Mars has chosen a philanthropy which relates to women’s rights, health and empowerment, but she said she’s working to include all genders in conversations surrounding sexual assault and violence.

“The [organization] that most directly relates to the philanthropy I’m running to support is my position in the [Gender and LGBTQIA Center],” Mars said. “So working on the gender-based violence prevention board — it’s new this year, we are working with eight students who are on the board — and I’m a coordinator for engaging men and masculinities. It’s a really interesting position being a woman and focusing on engaging men in these conversations and talking about it, framing the issue as [not] just a women’s issue if we’re talking about sexual violence on college campuses. This is really everyone’s issue.”

Kennedy and senior Evan Sassaman are both running to support the National Alliance on Mental Illness.

“It’s a cause that I’ll say is really close to my heart and my family’s heart, just from different members being affected by a variety of mental illnesses, and so it’s just something that I hold really personal to me,” Sassaman said.

Senior Anna Cosentino said she plans to donate the prize money to the Parkinson’s Foundation in support of her father.

“My dad actually has Parkinson’s Disease, and he was diagnosed while I was here at Elon, so it’s something that’s been part of my Elon experience,” Cosentino said. “I almost took the semester off, but the people in the community here — the people in my sorority and my professors — everyone’s been so helpful, so it seemed like a really good opportunity to continue and keep getting that support.”

Pineda said he plans to donate to the No Stomach for Cancer organization because his mother was diagnosed with stomach cancer during his senior year of high school.

“For that to happen to someone who was about to graduate high school and go into college and be the first person in my community, it was really hard trying to balance that,” Pineda said. “We all think cancer and we think breast cancer, we think St. Jude’s, but there are so many types of cancer, so I hope that my little line with my name and my philanthropy can serve as a little seed of support to this organization and to my mom too. She means the world to me.”

Senior Caroline Redd, a childhood cancer survivor, said she has chosen to fund research for cancer treatments specially for children.

“I’m running for Saint Baldrick’s. They’re a nationwide organization that raises money for kids with cancer, and they do research specifically for treatments for kids because a lot of times, kids get the same treatments as adults, which is really harmful for their bodies,” Redd said. “I had leukemia when I was four, and I found out about Saint Baldrick’s through a friend.”

Her friend decided to shave her head for Saint Baldrick’s after she was finished with her own treatment, and in spring 2017, Redd did the same.

“I’d love to meet people if anyone wants to come talk to me and introduce themselves. People are my passion, and I love creating relationships,” Cole said.

Keone said she is happy overall to see members of her class coming together through the Homecoming Court.

“I think a part of Elon is how everyone has these little communities yet somehow know each other,” Keone said. “So it’s kind of a cool way to bring a lot of people from a lot of different backgrounds together.”