Though unrecognized by university, fraternity remains hopeful for future 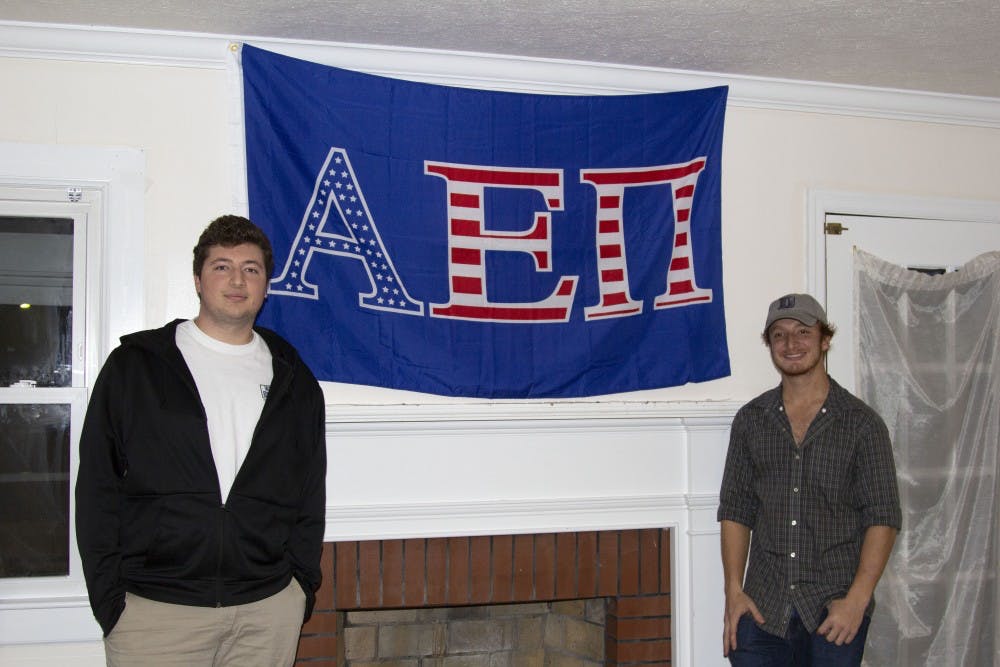 As of the 2017-2018 school year, Elon University’s student body consisted of 503 self-identifying Jewish students. Like other religions, Judaism can take many forms, but at Elon, there is only one Jewish organization available on campus. According to Phoenix Connect, there are 278 registered members of Hillel, but some Elon Jews have not yet found the community they were hoping for.

Zeta Beta Tau fraternity, a historically Jewish organization, may offer that community to some, but for the founding members of Town of Elon’s colony of Alpha Epsilon Pi fraternity, those two options were not enough.

Senior Maxx Tannenbaum decided it was time for Elon to become one of more than 300 universities around the world with an AEPi chapter or colony. Elon’s group, which now has just under 30 members, is considered a colony rather than a chapter because it has yet to gain recognition by the university.

After a year of back and forth with the Office of Student Involvement, who declined to comment for this story, Tannenbaum decided to move the process along and have the Town of Elon’s AEPi approved by the national organization. “We were told about two years ago that we could wait until an expansion year and hope for the best,” Tannenbaum said. “I was going to graduate by that point, and that’s not even a guarantee of recognition. So we tried, we really tried with the school, we met with them numerous times, had nationals speak with them. At the end of the day we had to make the decision that we needed to be recognized nationally in the now versus in three years from now. And that is what irritates the school, that we deviated from their process.”

An expansion year refers to a year when Elon University could welcome in a new fraternity; 2016 was one of those years, when Elon added a chapter of Beta Theta Pi. Tannenbaum says the university has a strict expansion policy that only allows new fraternities in the case of an expansion year or in the case of a recharter — when a fraternity that was previously kicked off of campus returns with completely new members.

that was previously kicked off of campus returns with completely new members.

The most recent example of a recharter at Elon is Pi Kappa Phi, which was suspended in spring 2015 as a result of hazing accusations, Elon News Network previously reported. This past spring, “new Pi Kapp” resurfaced on campus with a new group of members.

Junior Noah Lakind, who serves as treasurer for AEPi, says he thinks there should be a one-strike policy for these organizations. Tannenbaum says seeing the university welcome back old fraternities, previously removed for bad behavior, feels like a “smack in the face.”

“It is very much a smack to the face,” Lakind agreed. “I’ve heard that there’s more talks that Elon is going to bring back some fraternities that they kicked off a few years ago next year, and that to us is just disheartening. That makes no sense.”

Despite setbacks, AEPi continues to host events and sponsor meals at Chabad, Elon’s off campus Jewish organization. Most recently, AEPi fundraised and sat shiva — a Jewish mourning period that is usually practiced for close relatives who pass away — for the 11 people killed earlier this month at Tree of Life Synagogue in Pittsburgh. Lakind says that while they have also given money to Hillel in the past to help sponsor meals, they are unable to receive recognition because of their off-campus status.

“That’s kind of the caveat here,” Tannenbaum said. “The two things we can’t do are use on-campus institutions for AEPi-related events, and we can’t associate our name with Elon University.”

For Lakind, Elon’s expanding campus and student body should mean expanding options for Jewish students on campus — or at least wanting to. Tannenbaum says that while he attended Hillel a few times his freshman year, he wasn’t quite drawn to it, and it wasn’t until he founded AEPi that he found the Jewish community he had hoped for.

“Hillel is not the face of Judaism, just like with other religions, there are different sects of those religions,” Lakind said. “Same with Judaism, you have Orthodox, Reform, you have Conservative. There are different kinds. I don’t think all of those kinds can just be blanketed under one establishment, and the reason why there is a Chabad is because there are people who want something else.”

As the addition of Chabad in 2015 to the Elon community was almost an answer to Hillel, AEPi is an answer to ZBT. Tannenbaum explained that historically, there are three Jewish fraternities: AEPi, ZBT and Sigma Alpha Mu (Sammy). Currently, AEPi is the only one that still markets itself as a “Jewish fraternity,” and while the other two have Jewish foundations, they let go of their strict religious affiliations in the 1950s.

“The fact that we exist speaks volumes,” Lakind said. “The fact that there are Jews that are gathering because they don’t think there is an adequate answer to that.”

Lakind and Tannenbaum say there are many current members who previously tried to rush ZBT and found that it “wasn’t Jewish enough” or didn’t receive bids at all.

“Some of them were legacy, too,” Lakind said. “You’d think if you were Jewish they’d just let you in, because that is a thing, but a Jew and a legacy and they weren’t let in, that just makes no sense.”

A legacy refers to a potential new member who has a family member that was also a brother of the fraternity. ZBT was contacted and declined to comment for this story.

Both Lakind and Tannenbaum are determined to keep pushing toward one day being recognized — even if it’s after they graduate.

“We don’t give up,” Tannenbaum said. “We are pretty resilient.”

Tannenbaum says that today, more than ever, there is a need for strong Jewish communities. According to the Anti-Defamation League, in 2017, there was a 57 percent increase in anti-Semitic incidents throughout the United States.

“It’s more important now than ever to form community with your fellow Jewish brothers or sisters,” Tannenbaum said. “Because, alone, you don’t make much of an impact, but for an example, Pittsburgh, when we’re together as a group, when we sit shiva or show up to events, it makes a much bigger statement when you show up with 20 guys than one or two people.”

Tannenbaum and Lakind say they think the administration at Elon thinks that once they graduate AEPi is going to “poof, disappear.”

“That’s not how it’s going to work,” Tannenbaum said.