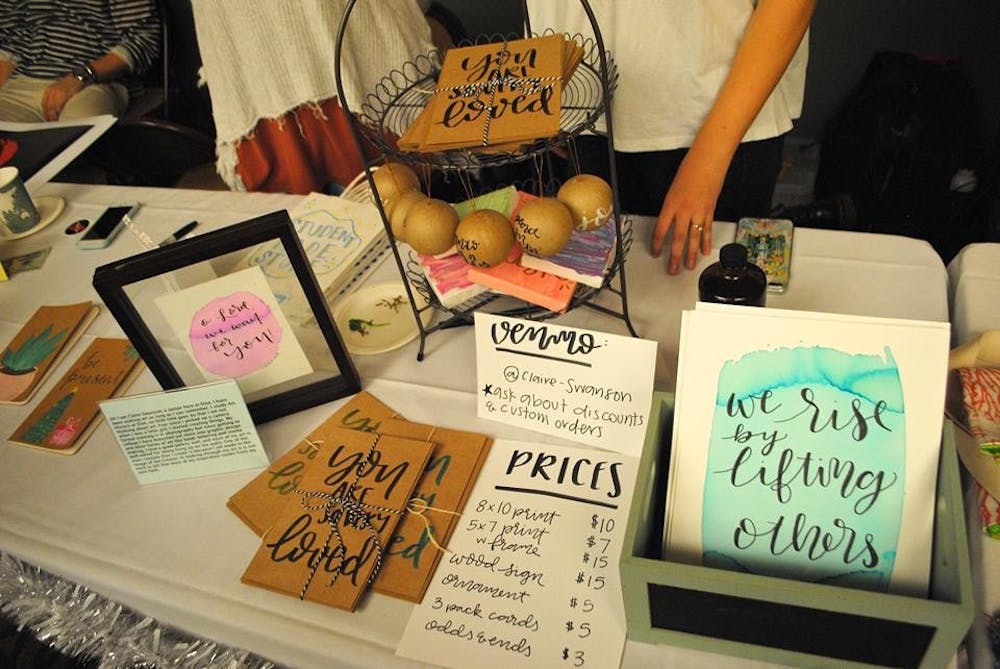 In hope of turning societal expectations of what’s important in college on its head, senior Ryan McElhinney began brainstorming ways to elevate and support students’ creativity.

Since his freshman year, McElhinney looked around and noticed students’ creative endeavors often had to take a backseat to make way for busy schedules and homework.

“I started to see some students who were involved in really what struck me as just really cool, creative endeavors — passions,” McElhinney said. “I started to think, it doesn’t seem like there is a whole lot of time,or importance put on these sort of things during college.”

After taking the course Philosophy of Leadership, where he was required to come up with a leadership initiative, McElhinney’s idea for the student-made store only strengthened and soon would come to fruition with help from his co-founder and girlfriend, Lindsay Reeth.

Last fall, the duo began figuring out logistically what needed to happen in order to facilitate an event where student makers and sellers could come to offer their goods to the Elon community. The idea was to allow students who may not even consider their hobby as a business opportunity, the platform to make a profit from an activity they enjoy.

Last year’s event, which showcased 15 sellers and brought in hundreds of students, took place in the final weeks of the fall semester. Reeth and McElhinney hope to replicate the event this semester with a tentative date of Dec. 7.

“[It ended up being] exactly what we expected it to be,” Reeth said. “I think we achieved our goal of making it an event and a storefront rather than just a little thing that people peep in to see what’s going on.”

But the event was almost unable to happen after Reeth and McElhinney received an email from Elon administrators saying that because of a standing contract with Barnes & Noble, no other group was allowed to sell goods other than food on campus. After a meeting to try and resolve the issue, the administrators suggested what they saw as the only alternative: talk to the manager at Barnes & Noble and see if she would allow the student-made store to run out of her store-front for a percentage of the profit.

“The next week, we went to her, and turns out she was an art major and everything in college and totally bought into everything we were doing and loved it and was like, ‘This is great, best of luck, hope you have a blast,’” McElhinney said. “So we went back to the people and were like, we’re doing it.”

The event was catered and decorated, resulting in some overhead costs that were not initially considered. Because of that, McElhinney and Reeth asked for 10 percent of the seller’s profit last year. But, for them, it’s not about the money.

“The profit is the experience and the joy from it, not the finances that we gained,” McElhinney said. “This year, we are upping the invitation and the interest in it and everything, so we started to think, ‘do we want to break even with this?’ Is that something that is reasonable? So we are thinking of taking more like 20 percent this year.”

The biggest takeaway for McElhinney and Reeth, and what adds to the excitement of getting to do it all over again this semester, is the confidence they saw burst from budding entrepreneurs who participated in the student-made store.

Reeth said there were many examples of students who had kept their passions restricted to their dorm rooms or never considered that what they did could be appreciated by others. In particular, she remembers a student who made friendship bracelets in her free time. She was apprehensive about selling her bracelets and was worried that they were not “good enough to sell.” Reeth pushed back and asked if the process of making them made her feel good and if she thought that feeling would be shared by her buyers.

"Oh, definitely, this reminds me of camp,’ [the girl responded], and I said, ‘Then what is the negative here? How would that ever be a bad thing?’ And she sold out,” Reeth said. “She was selling friendship bracelets, and I think it shows that you can do anything. No craft is too little or too big. It’s all great.”

In the beginning stages of planning for the store, the team considered it being a more consistent event but quickly realized the hurdles that would come into play. This year, they’ve started a website where buyers can contact sellers throughout the year so their business is not restricted to just one date. The website will also help McElhinny and Reeth stay involved after they graduate in May.

What started as a passion project has turned into a full-fledged business that has helped foster “entrepreneurship spirits” in many students. The 25 sellers so far who have agreed to appear at this year’s event include photographers, painters, a student who customizes longboards and even a student who has her own eyebrow threading business.

“It’s work if you want to call it work,” McElhinny said. “But hopefully, it’s the farthest thing from that.”