After three decades, Elon Volunteers and the Kernodle Center look to focus their efforts on deepening the work done by hundreds of students each year 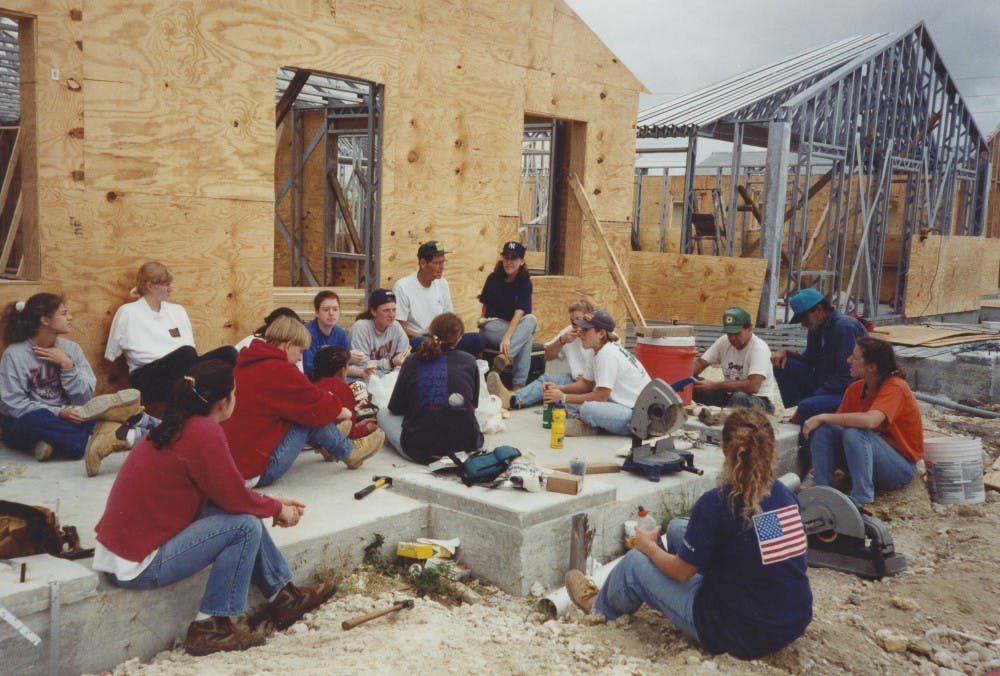 A group of Elon students take a break from a Habitat for Humanity build in 1997. Photo courtesy of University Archives.

Senior Ashley Berman had trouble finding her place at Elon when she arrived on campus three years ago. But what started as an office manager job for Elon Volunteers turned into a community of people who have helped define her college experience. Now, as executive director for leadership and development for Elon Volunteers, Berman says the Kernodle Center has been her favorite part of her time at Elon.

“I love our office structure,” Berman said. “It is completely student-run, and we really do place a huge of emphasis on the social issues that we work with and have deeper conversations about social justice and reflection.”

In 1988, Elon University’s chaplain Richard McBride decided with a group of faculty, staff and students that the university should start a chapter for Habitat for Humanity. At the time, current associate vice president for university advancement John Barnhill ’92 was a freshman. He had experience with the organization previously and wanted to get involved on campus.

Not only did Barnhill get involved,  but he served as the president for the organization that would lead to what is now the Kernodle Center and Elon Volunteers.

“I got kind of thrust into the limelight with starting service at Elon,” Barnhill said. “That was the kic koff of it all, and then from there, Habitat grew, and the chaplain said again, ‘What if we did more than just help people build housing -- working with people in need?’ So we started Elon Volunteers, and I served as the first student coordinator of that.”

The program that started with Barnhill now facilitates dozens of programs and has more than 100 student leaders that organize programing for undergraduates to participate in. Their initiatives range from youth development to environmental issues, including eight community partners that consistently welcome Elon Volunteers.

After the establishment of Elon Volunteers, the programing continued to expand. In 1997, the Center for Service Learning received an endowment from the Kernodle family in honor of their late son, John R. Kernodle, who was an active member in the Burlington community. His mother, who is now widowed and nearing 100 years old, serves on the advisory committee for the Kernodle Center and is still supportive of the center.

Mary Morrison, assistant dean of campus life and director of the Kernodle Center, has been at Elon for 13 years. Since her arrival, she has had a hand in expanding and deepening the center’s efforts.

Looking forward, Morrison says her focus is on deepening the work that students are doing and making sure their efforts are worthwhile and meaningful.

Barnhill sees great potential in the effect Elon Volunteers can have on the community. During the 2015-2016 school year, Elon’s chapter of Habitat for Humanity celebrated its 25th house in Alamance County—an achievement Barnhill does not take lightly.

“I think picking a few areas of concern that are deep in the community and focusing on those with all the resources, efforts, knowledge, skills and talents of Elon—we could actually solve problems. Not just address the problem, but solve it,” Barnhill said. “Imagine if Elon said we are going to eradicate poverty housing in Alamance County, and we are going to do that by partnering with all of these different organizations and all these different donors, imagine that. Alamance County—the first county in America that eliminates inadequate housing.”

Morrison says interest in long-standing organizations such as Habitat has not waned, but they are always thinking of ways to engage more students. One of the biggest areas of interest for Elon students, Morrison says, are those involved with the youth population in Burlington.

Through the Boys and Girls Club and programming through the Burlington Housing Authority, each week many students flock to these opportunities. During the 2013-2014 school year, the number of service hours completed by students increased by 23 percent to reach 127,000 hours.

Morrison says they’ve done studies to figure out how their work is impacting the community and how the volunteers are received. Morrison says through the various work, whether it’s students who complete a public relations assignment for a community partner or a student who tutors a child every week, the impact is felt and overwhelmingly appreciated.

As part of Homecoming this year, the Kernodle Center is celebrating its alumni who have gone on to pursue service-based work as a career.

“We want to celebrate those alums who took it to the next level and made it their profession or career,” Morrison said.

Not only are students pursuing careers in government or non-profit work, Morrison says she still finds many alums who have pursued careers in unrelated fields but still give back to their communities in other ways.

In addition to the Kernodle Center in upstairs Moseley, during the 2012-2013 school year, the Downtown Center for Community Engagement opened in downtown Burlington. It serves as a meeting place for students, faculty and staff but also for the community to have “important and crucial conversations.”

While Barnhill now has less of a hands-on role in the Kernodle Center, his long-standing history with the organization gives him perspective that few people have and leaves him with great admiration for its progress and successes.

“I’m really proud of what the students of each year, each day have put forward to make it better and stronger every year,” Barnhill said. “There is nothing more fun for me than to walk up into a Habitat meeting, meet some students doing Habitat or Elon Volunteers or anyone, and they have no idea who I am, and they talk about it with the passion that I had when I was doing it—that’s the best thing. That it’s sustained. It continues on.”