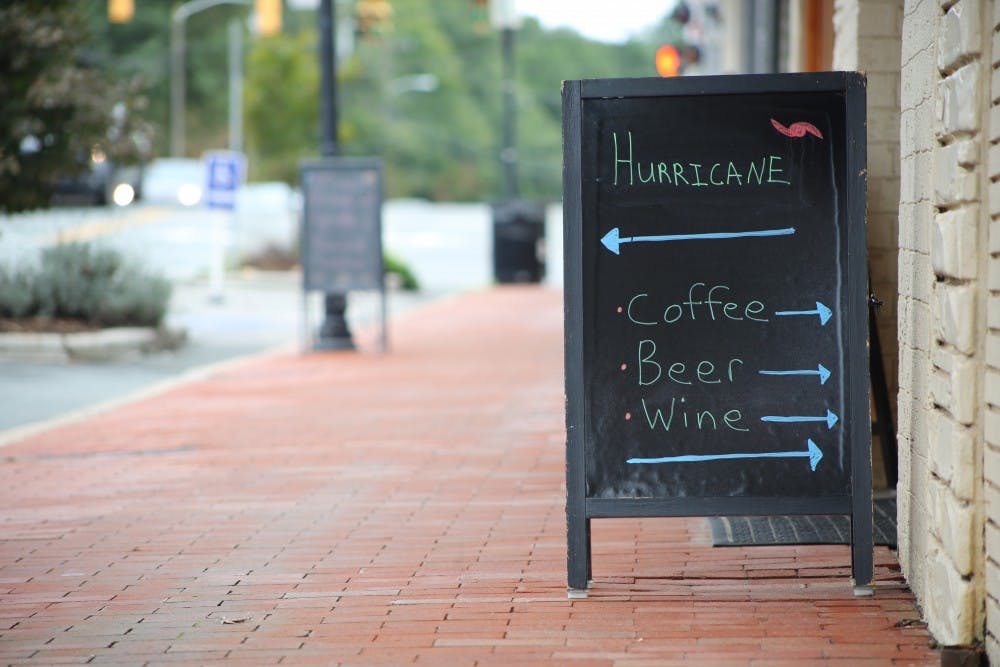 While Hurricane Florence is inching its way toward the North Carolina coast, shoppers are storming local businesses in preparation.

As of 9 a.m. today, Circle K gas station is out of gasoline. There are signs on pumps warning customers that they have run out.

At Lowes Foods in Burlington, water is the hot item. Earlier in the week, the entire water aisle was sold out.

Denise, a cashier at Lowes, says these business patterns are to be expected.

“I wouldn’t say there has been an increase in business, but there has been in specific items,” she said. “Water is the biggest one. The customers are still buying the normal things they do during storms though – bread, milk, meats and beans.”

Although customer behavior may be normal, Denise thinks there’s a sense of urgency with this storm.

“I think customer reaction is a little more severe because the storm is headed right for us,” she said.

Phil Smith, owner of The Oak House, was once faced with a hurricane while living in Morehead, North Carolina. He believes his downtown Elon business will be negatively affected by the coming storm.

Smith is concerned about the debris – down power lines, power outages and flooding – that will follow the storm and delay the reopening of his business. He plans to close The Oak House on Thursday.

For Skid’s Restaurant of Elon, they’re not too worried about storm prep.

“I think our boss… may be doing something outside on the patio like shielding it down or something like that,” said Skid's employee Haley Copeland. “Besides that I’m not sure – just probably taking everything inside.”

Copeland is optimistic about the business’ traffic moving into the storm.

“Honestly we were busier today than normal so that was kind of weird,” she said. “I was thinking, maybe they just want one more meal before they’re locked up in their house for who knows how long.”

But Copeland is unsure of any plans for Skid’s to close.

“I haven’t heard anything about closing but I’m not coming in Thursday,” she said. “As for right now we’re still open until it gets really bad.”

Chris Brumbaugh, owner of Tangent Eat + Bar, stated in an email that Tangent plans to remain open but will close if the weather gets extremely bad.

Other local businesses, like Circle K, Pandora’s Pies and Smitty’s Homemade Ice Cream, plan to stay open at this time until the weather worsens.