Elon News Network is following the impact of once-Hurricane Florence as it nears campus and the surrounding area. Check back to this page for the latest as the storm moves through North Carolina. 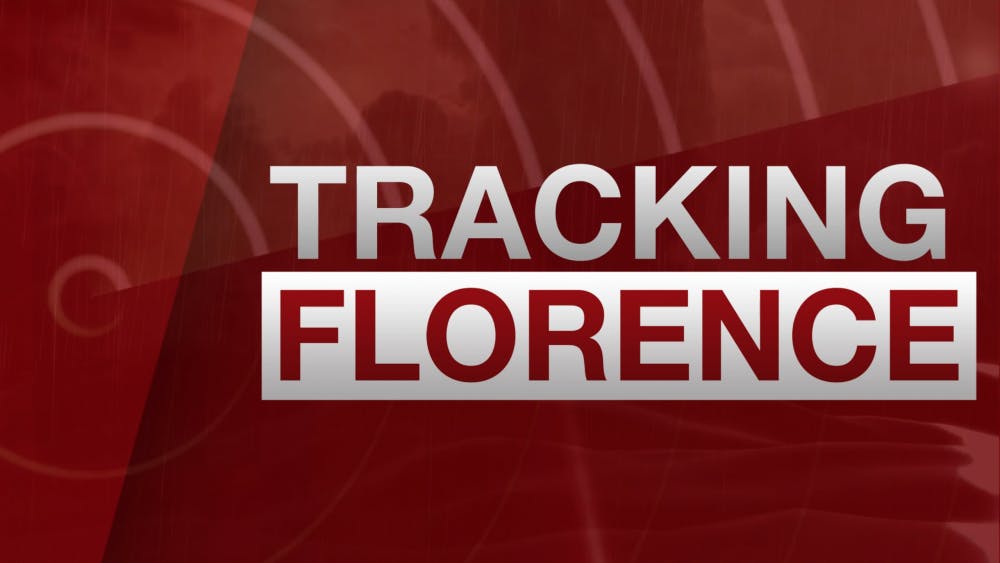 Life slowly returned to campus throughout Monday morning, as students trickled back to campus and the sun broke through the clouds for the first time since Wednesday. The ground was waterlogged after overnight rains, but afternoon sunshine is rapidly drying up standing water.

With Florence having passed through Elon, University President Connie Book issued a video message to the school community. She identified student safety as the top priority during the return process, and said "we need to work hard in coming days and weeks to maintain our momentum and continue our progress" in the young semester.

Remnants of the storm continued their slow pass through Elon, with steady rains continuing into the early hours of Monday morning. Accumulation was visible in some areas, like the full drainage swale in Mill Point. The National Weather Service predicts that rainfall between now and morning will total about a half inch. The chance of precipitation does not fall below 80% until 2 p.m. this afternoon.

Runoff filled the drainage swale in Mill Point after steady rains carried into the early hours of Monday morning. pic.twitter.com/OKwrPcTwkv

Elon received just over an inch of rain today, according to the National Weather Service. Steady rains began in the late afternoon, continuing into the evening. Since nightfall, rain has been intermittent. Apart from some pooling on the edges of pathways, flooding has been limited. A flash flood watch remains in effect until 10:15 p.m.

With only mild winds, there are no power outages on campus. Outages elsewhere have been minimal, with less than 100 customers seeing interruptions in service across the entire county, according to Duke Energy.

Rain is predicted to continue into tomorrow, but should amount to less than an inch throughout the day.

The first university-operated shuttles returned from area airports this afternoon, bringing students who evacuated Elon back to campus.

The National Weather Service has issued a flash flood warning for Alamance County until 10:15 p.m. tonight.

After a steady stream of storm update emails that began a week ago, Vice President for Student Life Jon Dooley sent his final message about the once-hurricane.

In his 2 p.m. update on Sunday, Dooley advised that campus should expect showers and thunderstorms, even after Florence was downgraded to a tropical depression.

The final email also tied up any loose ends about scheduling, reaffirming that classes will resume Tuesday morning and updating hours for services like Elon Dining and Campus Recreation and Wellness.

Dooley directed recipients to a number of relief organizations that are collecting donations to aid disaster recovery.

The chance of rain in Elon is increasing as the afternoon rolls around, but it's been a dry Sunday morning.

The National Weather Service predicts one to two inches of rain for today, but it most likely won't arrive until after 2 p.m. Save for a few leaves blown onto pathways, there were few signs of Florence's impact.

After thousands of students fled campus ahead of the hurricane, the en-masse return begins today. With many driving down the East Coast, we're keeping an eye on traffic patterns. As of this morning, it looks like things are flowing normally. Check back with the I-95 Corridor Coalition and the North Carolina Department of Transportation for the latest maps and updates.

With the storm continuing to weaken, Elon received less than three inches of total rainfall through the past 24 hours. Sunday morning brought soggy conditions, but limited standing water on campus.

Florence has now been downgraded to a tropical depression, but Elon's campus is still wet from its impact. More rain is forecasted for later today. Keep up with our continuous coverage at https://t.co/bXwy9Uo049: pic.twitter.com/9M29uH3RRw

Another day passed with no sign of severe weather in Alamance County, but our reporters were still following stories across Elon and beyond. You can watch all of Saturday's stories in another special edition of Elon Local News.

Even though Elon was mostly spared from Florence's effects on Saturday, dreary weather and limited campus resources left students looking for ways to stave off boredom while stuck on campus.

Occasional bursts of rain blew through campus today. But as the evening draws nearer, major rains and winds have yet to arrive. Below are some photos from another mostly still day on campus.

Jon Dooley's latest email to students and faculty reiterated that power loss from downed trees or branches and slippery conditions are the greatest threats to campus.

There were few new updates in the 1 p.m. message, as little had changed on campus since the previous day.

Dooley also noted that "safety should be the top concern as students make travel plans, especially if students will be traveling from or through areas that have yet to feel the greatest impact of the storm."

Even with this week's storm-related schedule changes, there are no plans to alter or cancel fall break. Provost Steven House adamantly affirmed that this was the case, saying that there had been "no discussions whatsoever" about canceling fall break.

As of Friday afternoon, House said "nothing has changed, nobody has talked about it."

As of now, there's still little wind or rain on campus. Today's forecast from the National Weather Service shows up to an inch of rain, and possible gusts reaching 32 mph. Here's what campus looked like while conditions remained still.

After a mostly dry Friday, rains continued to hold off through Saturday morning. Forecasts show that it may arrive in the afternoon, but the morning has brought little more than drizzle and passing showers.

Forecasts show that steadier rain may arrive after noon, but it's been mostly drizzle and passing showers throughout the morning. Full coverage here: https://t.co/bXwy9Uo049 pic.twitter.com/2kuj2AxDN2

The National Hurricane Center says Tropical Storm Florence continues to weaken as it draws more inland, but still poses a major risk for flooding in the Carolinas. Seven people total have died in the storm.

The latest projections show the storm continuing to inch further west, with the center of the storm missing Elon. According to Duke Energy, only 20 customers in Alamance County are currently affected by a power outage.

Light rain falling early Saturday morning at Elon as Florence is downgraded to a tropical storm. Take a look at our storm coverage here: https://t.co/bXwy9Uo049 pic.twitter.com/XXcb91Re0O

Our reporters were all over Elon looking at how people have been preparing for the storm. Join us in the newsroom for a show recapping the stories you need to know from Friday.

Despite widespread preparation and the evacuation of thousands of students, Friday yielded little storm action in Alamance County. Florence slammed into the coastline, but left Elon mostly dry.

Elon dining has posted updated hours as part of their modified schedule. The updated dining hall openings can be found here.

Heavy rain finally came down in Elon after a day with little more than a drizzle. It came and went in about twenty minutes, but showed that some spots on campus are vulnerable to flooding.

The National Weather Service issued a flash flood warning for Alamance County, which is in effect until 1 a.m. Saturday.

Florence was downgraded to a tropical storm, but the weather system is still marching slowly inland. Elon has seen few effects of the storm save for some gusts and intermittent light rain. Below is our 360° update from Under the Oaks.

Our reporters have been looking at how different members of the Elon community are making their own preparations for the storm.

While thousands left campus to escape Florence earlier this week, some international students didn’t have anywhere to go. We talked to students from as far away as Singapore and El Salvador about how they’re planning to ride out their first hurricane.

Growers and vendors brought their produce out to the Elon Community Church Farmers Market on Thursday, despite thin crowds on the emptied campus.

As students prepared, some also put together some creature comforts for their non-human friends.

Some sights and sounds from around campus through the morning and early afternoon:

With evacuated students spread across the region and across the country, we've put together a guide to getting back to North Carolina in time for class on Tuesday.

Elon Physical Plant turned off the school's iconic fountains and lowered their water levels in anticipation of wind and rains.

Students living in Sloan Hall are having trouble getting back inside. After power went out overnight, the building's card readers are not receptive to taps from Phoenix Cards, meaning that the doors will not unlock and open from the outside. Campus police say they're looking into getting the issue fixed.

'The Fairchild Community Center' is stocked with enough food to feed approximately 125 people according to @RedCross. 2 @RedCross volunteers on site right now as well as officials from human services, social services, and a 24/7 police presence. @ElonNewsNetwork pic.twitter.com/Wmp8dV2wIK

Another Burlington power outage affecting customers in the triple digits has appeared on Duke Energy's outage map. The orange area of the below image, a swath of land just below Pine Hill Cemetery, includes 579 affected customers. Duke Energy is assessing the damage and does not yet have an estimated restoration time.

ENN's Samantha Casamento has the latest from in front of Alamance building, where the fountain is off and the flags are down ahead of expected high winds.

Visuals from the first effects of Florence's outer bands at Elon Friday morning.

With winds and rain beginning to descend on Alamance County, Duke Energy is reporting the first significant outages. An area north of Glen Raven is showing 319 customers affected. Duke Energy says power is estimated to be restored at 11:46 a.m.

In an email, Vice President for Student Life Jon Dooley alerted students and faculty that classes will resume Tuesday morning and university offices will re-open Monday at 8 a.m. He acknowledged that canceling classes on Monday will give students who evacuated campus more time to return.

Thursday's sunny skies are gone, as the first wind and rain from Florence's outer bands arrived at Elon. Here are some stories we've been covering in and around Elon as the community prepares for the oncoming weather system.