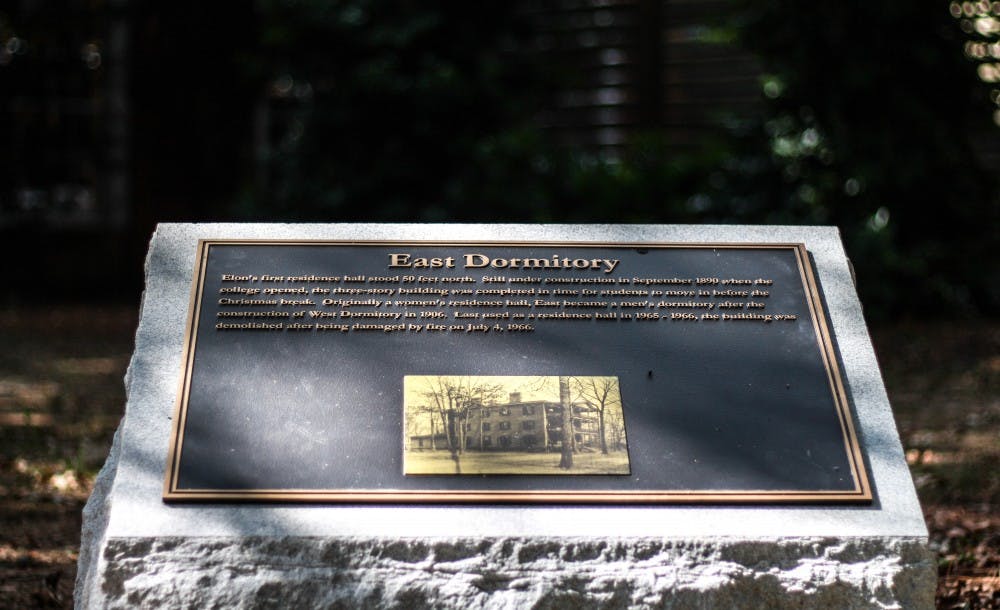 During the 1948-1949 academic year, about half of Elon University’s student body were veterans. They lived in what were known as Veterans’ Apartments. This is where the Oaks apartments stand today.

The Senior Oak was a tree that grew from the ground at a curve and became one of Elon’s most recognized symbols. It was the go-to spot for photographs, hangouts and marriage proposals since Elon was built in 1889. The place where the Senior Oak stood from the earliest days of the university is now where the incoming freshman class receives their convocation every year.

Places like The Senior Oak and the Veterans’ Apartments are being commemorated today along with five other sites around campus— from the first residence hall to the first-ever Elon College building. Seven historical markers have been placed with plaques in different locations to remember the history of buildings that date back to the beginnings of Elon University.

The idea behind this project came from George Troxler, professor emeritus of history and university historian.

“We wanted to mark the sights of buildings that are no longer present,” Troxler said. “To give people a historical sense of the campus.”

Troxler has been at Elon since 1969 and was the head of this project. He chose these seven locations because of their history and purpose. He says he hopes people wonder how the university was and looked throughout the 100 years it has existed.

“It gives you a sense of where the college began,” Troxler said.

Troxler proposed this idea to President Emeritus Leo Lambert, and with the help of Tom Flood, director of Physical Plant, and Brad Moore, university architect and director of planning, design and construction management, the project was made a reality this fall.

“It is appropriate to acknowledge and remind people in the current day and generation that we have been here for well over 100 years,” Flood said. “The evolution of the institution is, in many ways, quite remarkable.”

There are other locations these plaques mark around campus besides The Senior Oak and the Veterans’ Apartments. Old Main was the first Elon College building. It stood in the area where Alamance stands today yet only took up half its size. It was commonly referred to as “the college” or “main building.” Its plaque can be found on the main entrance to Alamance.

Comer Field, a field named after Pinkey Comer, an African-American employee and custodian of the athletic facilities, is another historical marker. This former athletic field now houses students residing at the Station at Mill Point. The historical marker is located in the Love Student Commons.

Flood says that though these past buildings or symbols may not mean much to the current Elon students, it might mean something to the students’ parents and other alumni.

The only standalone plaque that is not on a building depicts Elon’s first residence hall, East Dormitory. This historical marker is in the grass area between Smith and Mooney. Another residence hall that has its own plaque is the Young Ladies’ Cooperative Hall, Elon’s second women’s residence hall.

“Most female students probably don’t know we had a cooperative dormitory,” Troxler said. “[Female students] had to do their own washing and cooking. There was no maid service.”

A cooperative hall was a more affordable and self-sustaining dorm where students independently cared for their rooms and meals. The historical marker for the Young Ladies’ Cooperative Hall is on the entrance of Sloan that faces McEwen Dining Hall.

When Elon students traveled to college by train, there were six trains that stopped at Elon every day. The Railway Passenger Station stood in what is now the intersection of Williamson Avenue and Lebanon Avenue.

Though strategically placed to commemorate past buildings, only the Veterans’ Apartments, the Young Ladies’ Cooperative Hall and Comer Field are exactly where those landmarks once stood. The other markers were placed close to where they once were. The texts on these other markers note how many feet away the original buildings once stood from each plaque.

“We walked around as a team,” Flood said, “and asked, 'Where could this go that could make sense to the reader to tell this story that George [Troxler] wanted to communicate?'”

Troxler’s vision of the historical markers follows the style of the plaques that are in front of Belk Library that display a timeline of the high points of the history of Elon. Instead of following a timeline, these markers show locations.

This fall, Elon added five new buildings to campus. Troxler says current Elon students have never been on campus when there hasn’t been a new building under construction.

“Growth is coming extremely rapidly, but for a long time, there was nothing added," Troxler said. "After the fire in 1923, the next building was built after the second World War.”

The fire of 1923 destroyed most of campus, including Old Main, which had most of the classrooms, offices, school records, the auditorium, library and the chapel. This event is known as one of the most dramatic events in Elon history, causing $125,000 in damages, according to the Elon traditions website.

Though there are no current plans in continuing on making other markers in the future, both Flood and Troxler agree it is important to look at the history of Elon through its buildings.

“It is appropriate that the present is always informed by the past,” Flood said.