After a successful summer, the team hopes to keep up the momentum 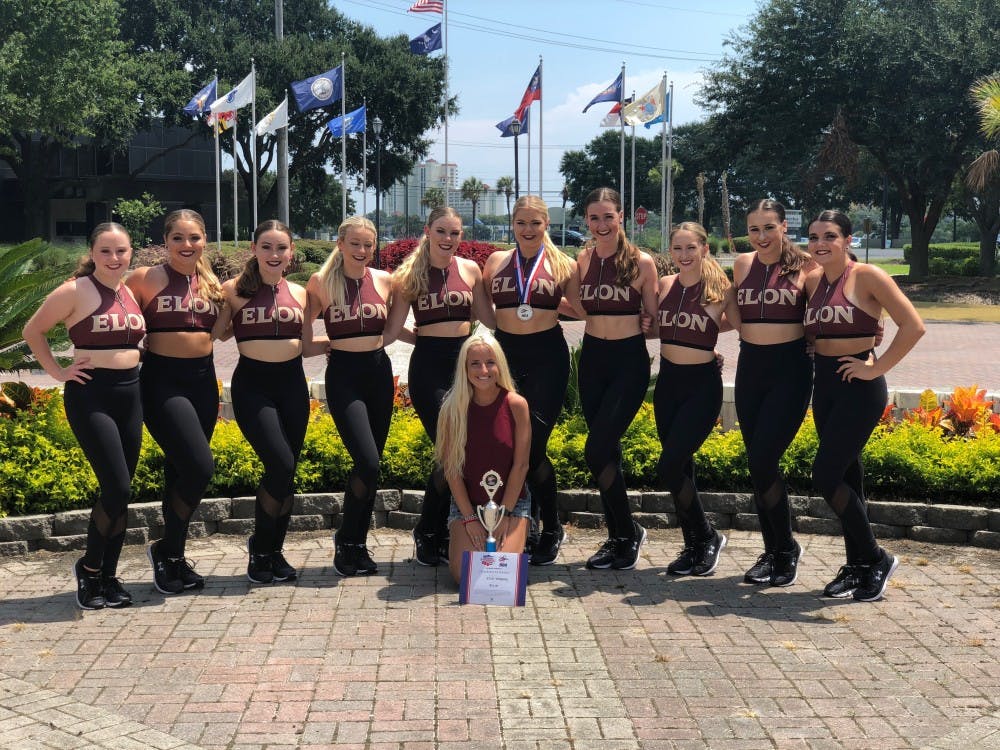 Elon University’s dance team is much more than “people shaking their pom-poms on the sidelines,” said senior Elly Dirks, captain of the team.

Earlier this month, the team took a trip to Myrtle Beach, where they participated in NDACamp, a “mini competition” to secure their spot in Nationals in April. Elon’s team not only secured a spot for nationals, where they took home sixth place last year — the first time in program history to make the finals – but they also received a silver bid, the highest level of a bid the team could qualify for, which will help cover the cost to bring the team to nationals.

“The teams that they believe will do significantly well at nationals will receive a higher bid,” Dirks said.

The dance team has been an important part of Dirk’s Elon experience even before she stepped foot on campus as a freshman.

“I knew wherever I went to college, I wanted to be a part of the dance team. So that was one of the first things I looked into when looking at college because if the school didn't have a dance team, it was a pretty much an instant 'no' from me,” Dirks said. “I wanted to be connected to the school in more than just academics. I also wanted to find that 'family away from home,' and being a part of a team that all shares my same love for dance was a great way to find that.”

Unlike other groups on campus, Elon’s dance team recruits most of its dancers at the end of the spring semester, aside from one fall audition that will take place on September 4 from 7-8:30 p.m. But many incoming freshmen audition during Rising Phoenix weekend. Because of this, the dance team has one of the longest seasons, lasting from August to mid-April.

The team, which has 18 members this year, dances during many events throughout the year, including the beginning-of-the-year pep rally, home football games, men’s and women’s basketball home game, ElonThon and Relay for Life, all in addition to their competition schedule. Dirks says many people do not realize how hard her team works.

“We put in the work like any other athlete, with multiple, long, three-hour practices and conditioning each week,” Dirks said.

Hanna Wentz, ’14, who danced on the team during her time at Elon and is now head coach, says a key component for her team’s success is accountability.

“This is something I am really stressing this year. It's quite simple: ‘Together we rise,’” Wentz said. “This is a team, and we only perform [and] accomplish our goals if everyone is putting in 100 percent. We are only as strong as our weakest link, and we need everyone on the team performing to their best ability to take our performances especially on the field [or] court and Nationals to the next level.”

Wentz says she is looking forward to the team’s first appearance in the Schar Center as it is a bigger performance venue as well as getting back to Nationals.

“The girls are very eager and hungry to go back and get a chance to dance on the Bandshell again, so I'm ready to see the fire come out of them,” Wentz said.

Dirks recalls the team’s experience last year at Nationals in Daytona Beach, Florida, as her best moment thus far as part of Elon’s dance team. She said the feeling of dancing on the Bandshell — one of the venues at Nationals — was hard to put into words.

“The feeling when finding out that we made it to finals and even more so, performing on the Bandshell – it was electric. I have competed in dance practically all my life, since I was 3, and I can honestly say I have never had a feeling like that when performing. It is absolutely unreal,” Dirks said. “There are no words that rightfully explain it. Then being able to come back as sixth in the nation was something I was so proud of.”