Kali Clougherty '22, a recent graduate of Marjory Stoneman Douglas High School, wants to continue activism in music when she arrives on campus 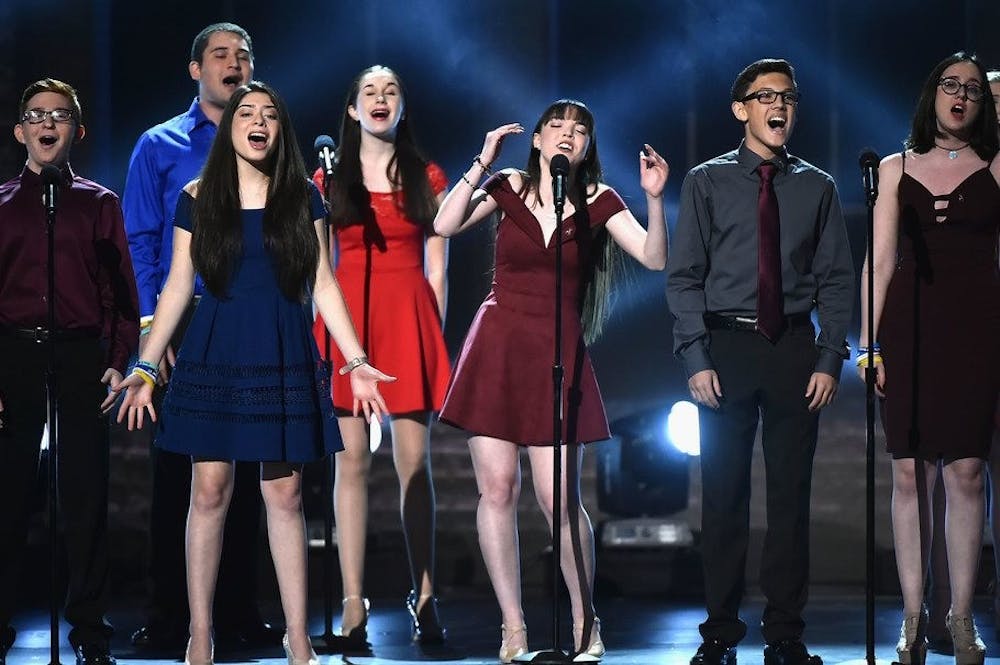 As incoming Elon University freshman Kali Clougherty prepared to perform at the 72nd Tony Awards at Radio City Music Hall in New York City, the Marjory Stoneman Douglas High School graduate said she could not believe she was there.

“I didn’t really process it until the curtain rose,” she told Elon News Network. “Until I saw Jim Parsons and Tina Fey, and looked into their eyes, that’s when it really hit me.”

But there she was, about to sing on national television during the annual celebratory ceremony for excellence in Broadway theatre.

For her and the classmates she came with, it carried a little more meaning.

Clougherty and her classmates survived a mass shooting at their Parkland, Florida, high school that left 17 students and faculty dead on Feb. 14.

Melody Herzfeld, director of the drama department at Stoneman Douglas, was honored Sunday for hiding 65 students during the massacre. After receiving the award, Herzfeld’s students surprised her and the audience by performing in the spotlight.

Clougherty sang a solo during the performance, evoking emotional responses from the audience, and she hopes to evoke the same responses through activism efforts when she attends Elon in the fall.

“Music has been a great way for me to heal," Clougherty said. “I want to write a musical as a healing process with my Elon peers talking about what’s going on in this world and what kids have to go through and live through every day.”

Since the shooting, Douglas students made their voices heard nationally on a number of issues.

Most notably, they started the #NeverAgain campaign and ignited massive “March for Our Lives” protests around the world, vouching for stricter gun control laws.

Clougherty said her mission is to continue the movement that began at her high school: healing through art. She hopes to bring these values and her experience to Elon’s musical theatre program.

That’s something Catherine McNeela, a musical theatre professor at Elon, said she’d love for the department to help with.

“None of us can even imagine what she’s gone through and what kind of healing she needs to do for herself,” said McNeela, who aided in selecting Clougherty for the program. “At Elon, she’s going to have a creative outlet for her anger, sadness, grief and that’s going to help other people heal and become aware.”

Following the performance, her solo spread over social media, with Broadway.com calling her a “Broadway queen.” The video of the full performance received over 715,000 views.

But some of the most significant support she has received has come from Elon, she said.

On her Twitter profile, which has more than 21,000 followers, she said she received messages from professors, alumni, and her musical theatre cohort.

“It feels like I already have a home,” she said. “I already know that I’m going to be accepted and included in the community before even getting there. It already feels like it’s a family and I don’t even know them.”

Clougherty was chosen from 1,500 other applicants to the Elon musical theatre program, which is made up of 28 students, an acceptance that McNeela believes was a “divine” match.

“What are the odds that we would pick Kali and she would pick us? I think there’s a big reason there,” said McNeela.

Along with spreading her message of healing through music, Clougherty wants to focus on ensuring students on campus are registered to vote and aware of how to fill out an absentee ballot

Tres McMichael, a senior musical theatre major, is excited for the experience Clougherty will have at Elon. As someone who is also passionate about activism and performance, he says Elon's musical theatre program has given him the chance to use his art to spread awareness .

"Our faculty members are very supportive and encourage us to use our voices for a change and use our voices for good. I think that is one of the most unique things about the musical theatre department is that we believe in being a person first," said McMichael.

For McNeela, she is looking forward to the moment she first sees Clougherty as an official Elon student, with high hopes for the rest of her undergraduate experience.

“I’m hoping that when she arrives at Elon she comes up with ideas to spread her gifts, knowledge, and spread awareness of the issue,” said McNeela. “I can’t wait until the end of August and I can’t wait to see her and hug her.”

Revised on 6/14: Jim Parsons and Tina Fey were not cohosts of the 72nd Tony's.