Breaking down the stereotypes, residents and traditions of Elon University's only all-male dormitory. 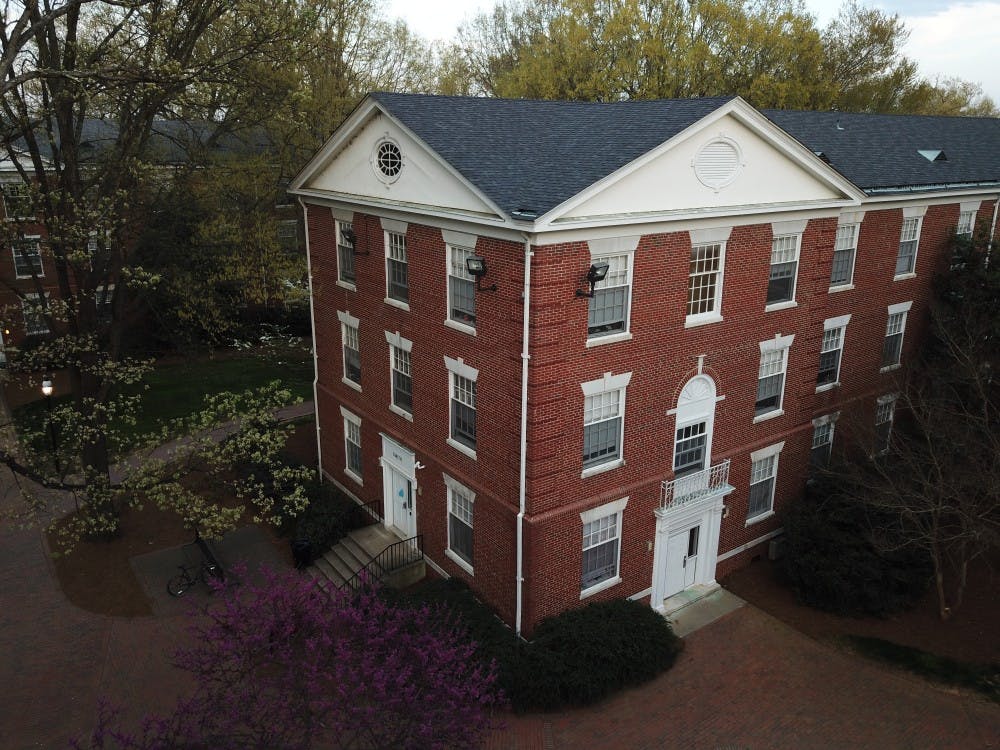 
Smith Hall from the side at sunset. Photo by Jared Mayerson.

Though many call it gross, some call it the best place to live on Elon University’s campus.

Nestled between the Duke building and Carolina residence hall, Smith Hall is unique in that it is the only dormitory on campus where only men are allowed to live.

The residence hall has a history of broken water fountains and costly vandalism, but is attractive to incoming freshman guys that want the all-male experience. A 2012 Youtube video named “Elon University Dorms: Freshman Residence Life” included interviews of freshman talking about what they think of Smith Hall and got over 45,000 views.

Not much as changed about the dormitory since then.

“One word to define Smith is sketchy,” said Carolina resident Reese Karras. “You go in there, it smells kind of funky. There’s been a lot of vandalism issues like the urinal and the water fountains. There's always cops walking through there and you don’t see that in Carolina.”

Freshman Julia Reed, a friend of Karras', said, "But our best friends live in there.”

“I just like the community in Smith,” said resident Jack Gormley. “I went to an all-guys high school and this is an all-guys dorm so it kind of reminds me of that.”

The dorm has been under heavy scrutiny from Residence Life following the recent 2017 fall semester incident in which a urinal was ripped out of the wall on the first floor bathroom. Elon News Network published a story reporting a total of 23 students displaced because of the incident, which exceeded $100,000 worth of damage.

The residence hall also holds a certain stereotype, one that every guy who lives there is thought to embody.

"When things happen in Carolina or HBB or Sloan or Virginia they always blame Smith and we don’t really leave here that often. Whenever exit signs go down in other buildings, they just assume it’s a Smith kid,” Martinides said.

Even though this Smith stigma could get annoying, residents don’t let the alleged stereotype dictate how they really are as individuals.

“I think I am a little different than most of the guys who live in Smith,” Mock-Rossi said. “I don’t think it defines me.”

When it comes to damage, some residents want to “continue the tradition” of Smith vandalism.

This tradition is not a new one. Elon University alumnus Tom Bass, class of 1967, recalled an act of vandalism when he lived in Smith.

“A fellow — we called him Goose — took the doors off his closet, on the third floor, turned them sideways, put them inside shower and put towels between them, and turned the water on, and made a four-foot deep swimming pool, until they broke,” Bass said. “A tidal wave came down the stairwell.”

"There was a football player who shall remain nameless, who was in our class, who came in one night, late — he needed to go, and he didn't make it to the bathroom, he just went in the laundry room and went right there in the sink," Bass said. "I didn't do my laundry there the rest of the year."

To combat vandalism, security cameras were installed to ensure whoever acts against the university will be held responsible.

“[Smith] not only has the reputation of producing kids that essentially join fraternities, but also producing damage and being reckless,” Mock-Rossi said. “People want to live up to this reputation.”

Jon Dooley, vice president of student life, called Smith residents together last fall to call attention to the vandalism, but nobody claimed responsibility. Since the meeting, students questioned if the university will take action by turning Smith into a co-ed dorm. Residents and students living in Historic Neighborhood don’t like this idea at all.

“I want it to stay the way it is,” Martinides said. “Whenever you hear of someone that lived in Smith, you always have that bond.”

The Smith Hall community is strong not only in the residence hall itself, but especially with its sister dorm: Carolina Hall.

“What would Carolina be without Smith?” Reed said.

“It’s like asking ‘What would Jack be without Jill?’ It’s a tradition, they can’t break the tradition. There’s Carolina and then there’s Smith. They are married,” Karras said.

Dooley declined to be interviewed, but in an email sent to ENN, he said the university has no plans to turn Smith into a co-ed dorm as of now.

“It is not actively under consideration at this time,” Dooley wrote.

The all-male residence hall is known for being run down and dirty. Residents know the dorm is like that, but it’s just another aspect that adds to Smith’s charm.

“It’s always an adventure to walk out of my door and see what’s new,” said second-floor resident Benjamin Warters. “Really noisy, really hard to get anything done, it's always hot and humid in there.”

Despite the obvious history of vandalism, the noteworthy dirtiness through the hallways and the constant craziness, residents still love the hall they call home.

“It’s the best place to live on campus. I love Smith,” Martinides said. “I mean, coming to college can be nerve-wracking if you don’t know many friends and want to meet people. Coming to Smith, you are put in a position where everyone is in a similar spot as you.”

As for the future of Smith residence hall, Dooley wrote the hall will go through minor changes during the summer, but is due for a more significant upgrade in the summer of 2020 that compares to “those that occured in Sloan and West over the past two summers.”

Until then, the modern reputation of Smith Hall will continue.