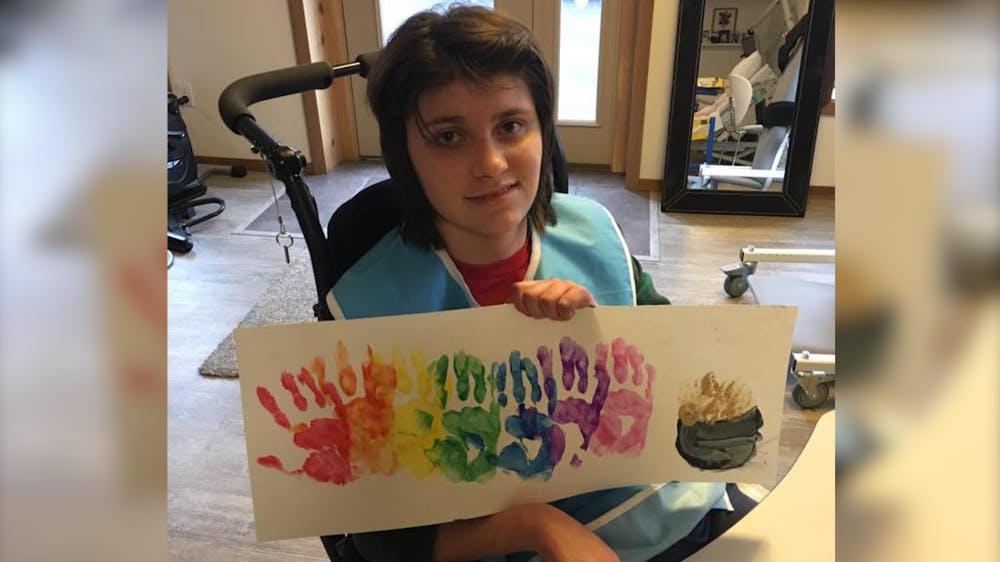 Molly Offstein shows signs of recovery one year since being hit while crossing University Drive. Photo via Facebook

Elon University cross country runner Molly Offstein continues to make progress in her recovery after being struck by a car while jogging one year ago.

On March 6, 2017, Offstein was hit while crossing University Drive at O’Kelly Avenue and sustained multiple serious injuries, including a traumatic brain injury. While 365 days have gone by, the cross country runners are always thinking of their teammate.

“Everything we do now, we do for Molly,” said sophomore Emily Smith, friend and teammate of Offstein.

“Her name is still on her locker in the locker room and she’s still on our roster ... Everything we do — every run, every race, every practice — we think about Molly every time we do it.”

After the accident, Offstein spent nearly four months in a medically induced coma before waking up in July 2017. During this time, a Facebook page called “Show Us Your Shoes” was started to support Offstein throughout her recovery. Today, this public Facebook page has almost 8,000 members and features people showing their shoes and posting encouraging messages for Offstein as she continues to recover at her home in Frostburg, Maryland.

"The 'Show Us Your Shoes' page on Facebook has given detailed updates as to what and how she’s been doing and it’s honestly amazing how she has progressed the way she has considering the severity of her injuries and the situation itself,” said senior Lydia Laws, Offstein’s teammate.

Over the past year, Offstein has made remarkable progress in her recovery. While her parents did not wish to do another interview at this time, they were happy to share her progress with Elon News Network and the Elon community.

“I was watching the Olympics with Molly and having her select which speed skater from which country to cheer for before each race began,” Offstein’s parents said to ENN in an email. “After watching a few races I asked her if she remembered who her biggest competition was in high school at important meets. She named two elite Maryland runners — their first and last names — that she competed against with no cueing.”

Offstein’s parents are confident their daughter is strong and will continue to fight and get better every day.

“Know that the same drive, story and heart you see in Shaun White and the other Olympic athletes is evident in our Molly,” they said.

Law and Smith also agreed their friend is a fighter. They said not a day goes by when she isn’t on their mind.

“God is definitely watching over her,” Law said. “She’s an amazing young woman and I honestly believe she’s going to achieve the impossible.”

While there’s still a long road ahead, people who know Molly are confident she will succeed in her recovery.

“She never gave up and she’s never going to give up,” Smith said. “She’s going to keep fighting until she fully recovers and I know that day is going to come. It may be a few months, it may be a few years, but it’s going to happen because Molly has that determination to make it happen.”