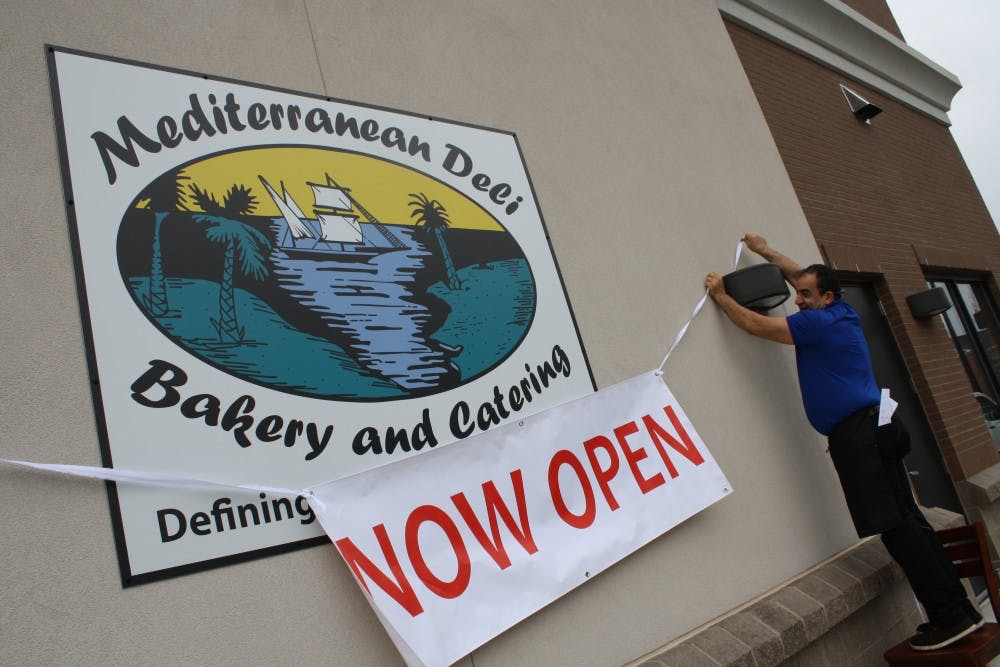 Owner Jamil Kadoura hangs a sign announcing to the Elon community the Mediterranean Deli, Bakery and Catering is open as of Feb. 28. Photo by Erik Webb

Walking into Mediterranean Deli, Bakery and Catering in Park Place might be a little overwhelming. The deli cases are filled with rows of colorful dishes and the signs describe unfamiliar items to most people - like fatayer and grape leaves.

Owner Jamil Kadoura said he thinks some Elon University students will know this middle eastern cuisine from food carts they've seen on northern city streets. He bases this off the fact that Massachusetts, New Jersey and New York are in the top five most represented states for Elon undergraduate students, according to the 2017 Registrar's report. Kadoura actually got his start in cooking at a falafel cart himself, helping while he was growing up.

Kadoura said this food is at the core of his cultural roots, and he’s excited to bring Middle Eastern culture and homemade dishes to Elon.

“Everything is made here, 100 percent,” Kadoura said. “When I come here and I make my own food, I celebrate my culture everyday.”

When Kadoura says everything is made there, he means it. Fresh pitas pop out of the oven like magic, and the smoothie bowls are made to order. The tzatziki sauce, along with other complimentary condiments, are also replenished fresh throughout the day.

For those who haven't gotten to try the food at the Mediterranean Deli's Chapel Hill location, here are some tried-and-true suggestions:

The restaurant is in its trial period during the first week, according to Kadoura. The owner and his staff are still adjusting to the new location and community, contributing to a longer wait time and 15 items left off the menu. Still, students said they didn't mind waiting for good food.

"It has great variety," said senior Monica Austin. "I'm very excited about it, I'm going to be here a lot."

Mediterranean Deli, Bakery and Catering is open 11 a.m. - 10 p.m. every day. Their full menu can be found here.