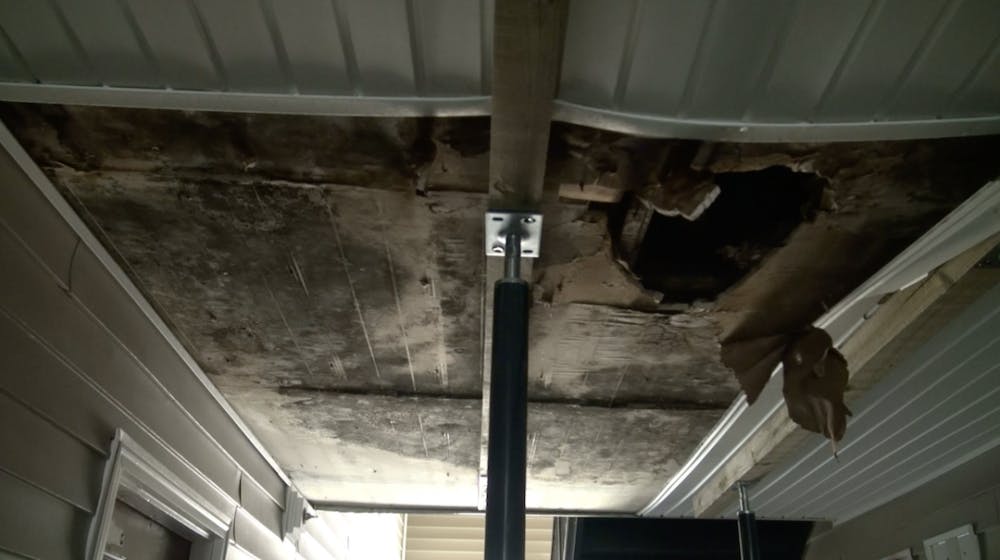 All residents of The Crest Apartments building 2020 were evacuated Sunday after Elon University Campus Police found a "cracked and sagging concrete floor," according to Owen Covington, director of the Elon University News Bureau.

The building, which can hold 48 students in 12 apartments, was occupied by 37 students at the time of evacuation.

A hole in the ceiling between the first and second floor and floor material scattered in front of the building were visible Sunday morning.

Residents waiting outside of Crest Apartments after damage to second story floor. pic.twitter.com/Gnhii83ZNs

Residents waiting outside of Crest Apartments after damage to second story floor. Video by Emily Harrison.

"Engineers and contractors on the scene Sunday morning determined that moisture under the breezeway had led to the rotting of wooden beams supporting the concrete,"  Covington said in a statement. "Supporting beams were installed to prevent further sagging of the breezeway and the south entrance to the building was blocked. "

Preiss Company, the off-campus housing property management company which owns and operates The Crest, said it will get the building inspected and repair it as soon as possible.

"We are not allowed in that building," said Ian Reynolds, assistant director of Residence Life. "It is structurally unsafe."

The representative also said they are working on getting parking passes for the displaced students who will be commuting back and forth to campus. Those without meal plans will be reimbursed $25 per day.

“It will be your responsibility to keep up with receipts,” the representative said in a meeting in Moseley 212 with the affected students Sunday night. “We don’t know how long this will last. I don’t think it’ll be tomorrow.” The representative said this is only a two-day plan, and once regular business hours resume Tuesday, there will be more information.

Covington said parents of the students have been notified. And while Reynolds said he understands their parents concerns, he told students at the meeting to "tell your parents that y’all are adults."

Sophomore Jacob Bicknell lives in apartment 202, closest to where the damage originated. Bicknell said he wasn't there when the floor caved in and doesn't know what happened.

"I don't even know how to feel," Bicknell said. "I know that we're going to have to be out of there for a while."

Junior Mario Paccini, who lives on the second floor, said he woke up to his apartment manager knocking on his door with the news: “You have 30 minutes to pack everything and leave."

An officer on the scene said all Crest apartments will be checked for structural issues.

This is a developing story.