Smashing the scale: Elon community comes together with a message of self-love 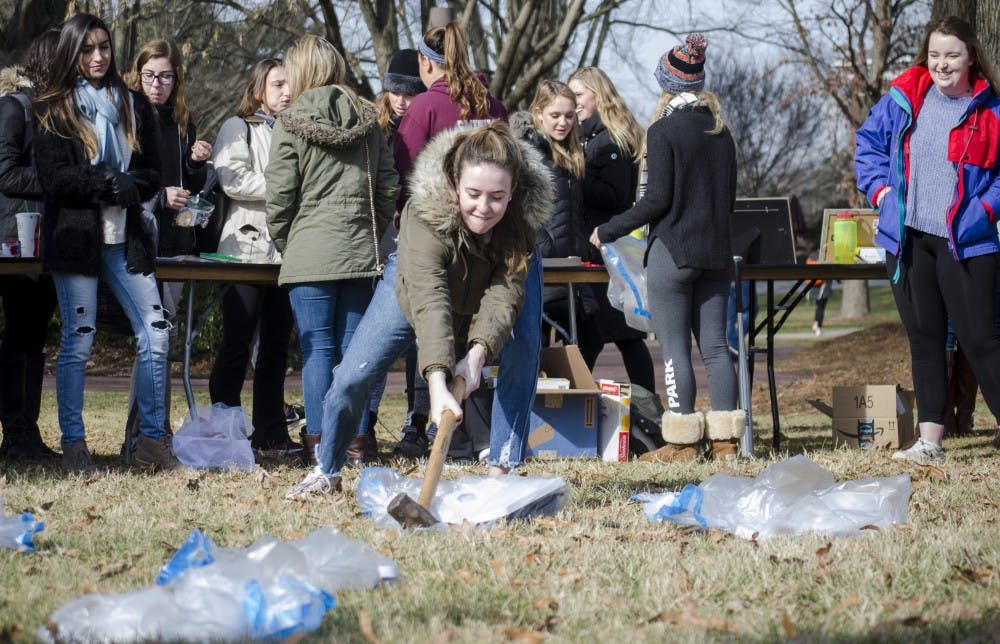 A strong message of self-love was shared Tuesday, Jan. 16 at the "Southern Smash" events. The message was so strong in fact, that it literally broke weighing scales into pieces.

This national group came to Elon University for the second annual event, comprised of activities on Speaker's Corner as well as a panel Tuesday night.

The afternoon's activities included taking a sledgehammer to weighing scales, writing down things you love about yourself, and letting go of a balloon with your "perfect" weight. Dozens of students visited the plot of land to embrace the self-love attitude, and especially to smash the scales.

Sophomore Katee Fletcher said the crack of the metal scale was cathartic.

"It's very empowering," Fletcher said. "Screw the stigmas, smash the scale, love yourself!"

For freshman Ethan Josovitz, this scale smash made the lessons he learned in his Winter Term class, titled Eating Disorders, feel more real.

"This definitely is a great way to involve yourself in an educational experience outside the classroom, while also having fun," Josovitz said. "It feels freeing, like relieving all of my emotions."

Among the Southern Smash organizers, there was a clinician and dietitian on the SmashTALK panel Tuesday night. One Elon student was on the panel, senior Hannah Durbin who is known around campus for her healthy living social media. She has more than 15,000 followers on her Instagram account, where she shares workouts, daily positivity posts and health promotions.

Durbin was chosen for the panel because of her experience with anorexia.

"I struggled to the point where my life was almost taken from me when I was 19," Durbin said. "Ever since then, I was dedicated to not only making myself better, and improving and recovering, but then once I achieved that recovery, I wanted to help others do the same."

Durbin said she struggled with her eating disorder for six years, and is very open with talking about her experience.

"I couldn't understand that the voice in my head wasn't trying to save me," Durbin said. "It was trying to kill me."

Durbin praised the dietitians and therapists she worked with throughout her recovery treatment, and the panelists said they handle cases like Hannah's more than one would think. Dr. Maria Paredes, a certified eating disorder specialist and therapist, said she shares a lot of patients with the dietitian on the panel, Julie Duffy Dillon. Many of these patients, they said, come from Elon University.

"What I'd say I notice about Elon students," said Paredes. "You guys are really bright, and have a lot of great energy and have really big hearts, but you also experience a lot of pressure to be a certain way."

Paredes then posed the question to the audience, asking if they had ever been told something was wrong about your body. The majority of hands in Whitley Auditorium went up. This kind of thinking, Paredes said, "can take away from the fact that bodies are not wrong if they come in different sizes."

"It would be pretty boring if we all looked the same," Paredes said quoting her 6-year-old daughter.

Paredes and Dillon later talked about the stigma that surround seeking help for eating disorders. Dillon said it takes courage to seek support, especially for men. While their overall percentage of male clients is lower than women, they both agreed that men are probably just as impacted as women.

Dillon pushed the audience to think about the idea of "normal eating," which she said can be defined as "flexible and varying day-to-day." But Dillon said the new normal has become dieting. All the panelists discussed the idea of dieting and weight loss, mostly emphasizing how it can do more harm than good.

"There's no diet that research has been able to show working for most people," said Dillon. "That is able to help people maintain weight loss and improve their health for most people long term."

The SmashTALK panel ended with some advice from Durbin for anyone struggling.

"This journey is not about being perfect," Durbin said. "People are there for you, but you have to be there for yourself...Be patient, be gentle, and take it one step at a time."

Durbin said she embraces her struggles, and she would not be participating in Southern Smash or even be alive without them.

More information on Southern Smash can be found here.