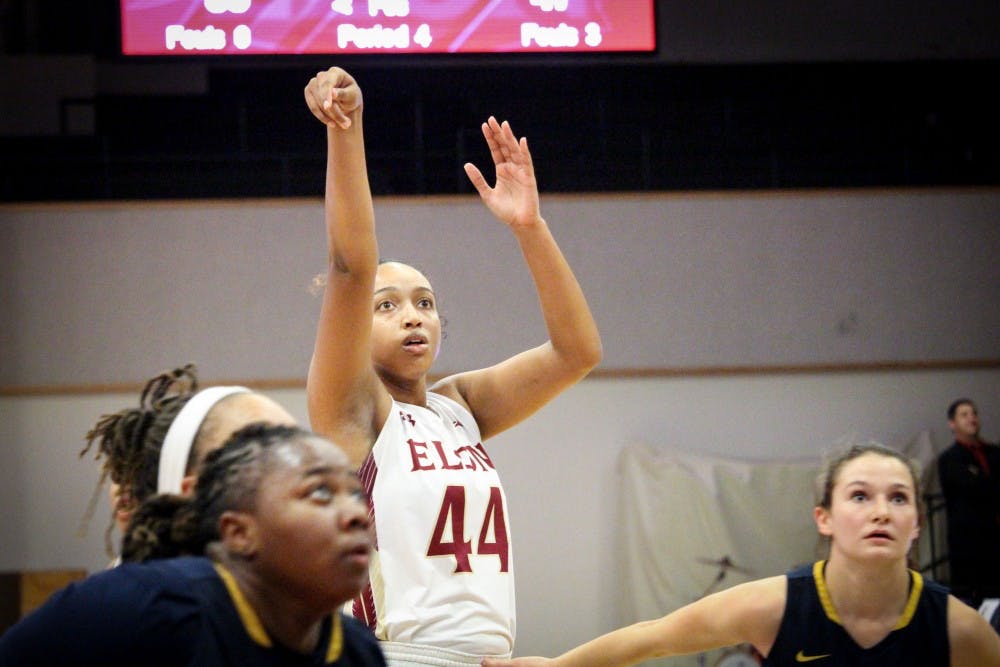 With an abundance of turnovers in the first half, a win didn't look possible for the Phoenix. But when the final buzzer sounded, the Elon University women’s basketball team pulled out a 64-51 win against the University of Delaware.

“We kind of started … sketchy in the first half I would say," senior guard Shay Burnett said. "We got back on transition defense, but they were just hitting buckets after buckets, and it just seemed like we couldn’t get a flow at the beginning of the game with our offense.”

At halftime, the Blue Hens had a four-point lead, taking a 27-23 edge into the break.

At the start of the game, senior center Malaya Johnson was only twelve points away from scoring her 1000th point, and the current direction of the game looked like the achievement might be out of reach.

“I was kind of skeptical. I got two fouls early, and I was pretty upset with myself,” Johnson said. “I was talking to Coach McKinney at halftime, and she was telling me how I got the second wind, go and do what you’re supposed to do. That put me where I needed to be.”

In the final quarter of the game, Johnson was able to secure the milestone with 3:15 left in the game. Johnson is the 24th player in program history to make this accomplishment.

“Coach has certain things set up for us to be able to get the ball inside, and they were most definitely looking for me today and gave me the opportunity to score," Johnson said. “When I hit it, it was just a bittersweet feeling, and everyone was so excited, and it was at Elon, so it was just, it was awesome.”

"Hard fought win," head coach Charlotte Smith said. "It was very physical. I’m glad we were able to tough it out and pull out the win. And congrats to Malaya on her 1000th point. She’s a beast out there in the low block in the second half which gave us a much-needed win.”

After a loss to Delaware on Jan. 5, securing this win was important in order move forward in conference. A change in lineup strategy was definitely necessary for today's game.

“Our strategy was to be a little bit more disruptive, defensively,” Smith said. “I feel like the last game against them, we allowed them to reverse the ball and get into a flow of their high-low offense."

"Me personally, I was like, in the second half we need to come together, stop transition points, because that’s what was killing us in the offensive rebounds,” Burnett said. “As a team, I think we re-grouped at the start of the second half."

“Defensively, we really turned it up and were very disruptive in the second half, and they couldn’t get into a flow of their offense," Smith said.

Delaware got into foul trouble trying to limit the Elon offense, as junior forward Nicole Enabosi and freshman forward Lizzie Oleary fouled out of the game. Three other Blue Hens players came within one mistake of doing the same thing.

The Phoenix were able to shoot 29-36 from the line to help secure the double-digit victory.

Elon takes the road for its next game, traveling to Philadelphia for a matchup against Drexel University on Jan. 26.