With a higher number of passing grades, universities address concerns of grade inflation 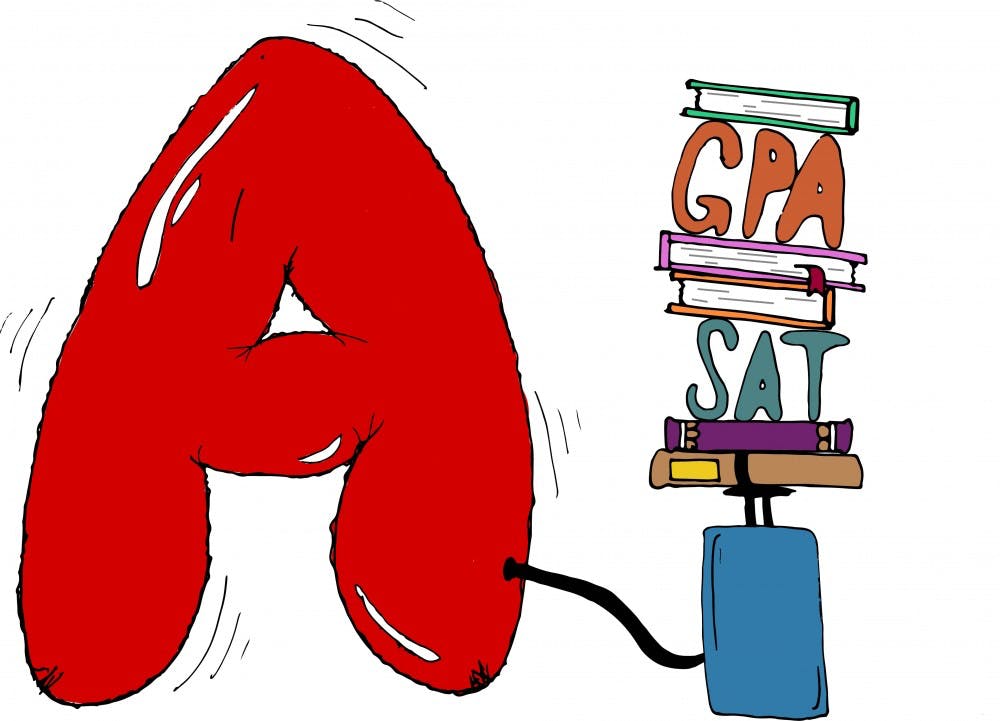 When former Duke University professor Stuart Rojstaczer handed out grades for an undergraduate class he taught in 2003, there were no C’s, or D’s or F’s. There were only A’s and B’s.

But unlike for his students, this was no reason for him to celebrate. Rojstaczer was likely experiencing grade inflation, commonly defined as higher grades for work that would have previously earned students a comparatively lower grade.

According to data collected by Rojstaczer, at Elon University, the average GPA in 1977 was 2.48. The most recent figure that Rojsctaczer acquired was 3.29 in 2013. Higher grades and GPAs do not automatically equal grade inflation, but if the current trend continues, Elon is projected to hit an average GPA of 4.0 by 2037.

Different authorities cite different reasons for the gradual but consistent increase in grades at U.S. universities. At Elon, Provost and Executive Vice President Steven House said students got significantly better between 1980 and 2010, coinciding with higher SAT scores and GPAs from incoming students.

“During this period of time, I’m not convinced you can conclude that we had grade inflation,” House said.

“There’s no question that I’ve seen an improvement in the intellectual abilities of our students in the 14 years I’ve been at Elon,” Scott said.

Scott recalled the type of low-performing student that used to attend Elon.

“There would be four or five guys at the back of the room in their flannel shirts and their ball caps pulled down over their eyes, who were likable guys, but had no intention of working very hard,” Scott said. “They would turn in their work, it wouldn’t be terribly good, but it would be passable and they would generally get C’s and they would happily take their C and leave. They had no greater aspiration. Today, we just don’t have those students.”

House attributes the change in the type of students coming to Elon and changes in the direction of the university as a whole to the increase in average GPAs.

“I think Elon students are better now than they were back then. I think faculty are better teachers now,” House said.

On his website, Gradeinflation.com, Rojstaczer also takes into account that the type of student entering certain universities has changed over time, resulting in GPA increases.

“At private schools like Duke and Elon and at public schools like Florida and Georgia, the caliber of student enrolled is higher than it was 30 or 50 years ago,” Rojstaczer wrote.

But Rojstaczer notes that more lenient grading is still the main driving force behind grade inflation at these schools.

“Rises in average GPA are mainly due to the same factor found at other schools: professors are grading easier year-by-year by a tiny amount,” Rojstaczer wrote.

Though the general notion of students becoming smarter remains unfounded according to Rojstaczer, Jesse Stommel, executive director of teaching and learning technology at the University of Mary Washington, does think this is the case.

House doesn’t deny the possibility of grade inflation taking place in the last decade, when SATs and students entering Elon were not getting better compared to past decades.

But House said he is still skeptical because grade inflation remains difficult to prove.

“To really conclude and say that’s definitely what’s going on, you’d have to hold all other variables constant,” House said. “You can’t do that.”

Elon’s Office of the Registrar defines an A asas “distinguished.” House said as a faculty member, he is bothered by the amount of A’s that are given out. If too many students receive A’s, the distinction, and therefore value, of the grade is lost.

“We have too many people that are ‘distinction,’” House said. “I think it’s unfair to the best students.”

“There is more pressure on faculty to give good grades from students,” House said. “It doesn’t come from the administration.”

Scot said that pressure comes from the students’ expectations.

Some students try to avoid rigorous professors, but students shouldn’t choose classes that have a reputation for an easy A.

“You’re only a college student for five percent of your life,” said Christopher Healy, an associate professor of computer science at Furman University. “Some students play the game to maximize their GPA.

“Just because that course over there gives 60 percent A’s, how do I know that I’m one of the 60 percent?” Healy said.

“Unfortunately, people take classes for the wrong reasons sometimes. Healy said. “People should follow their calling, not the A.”