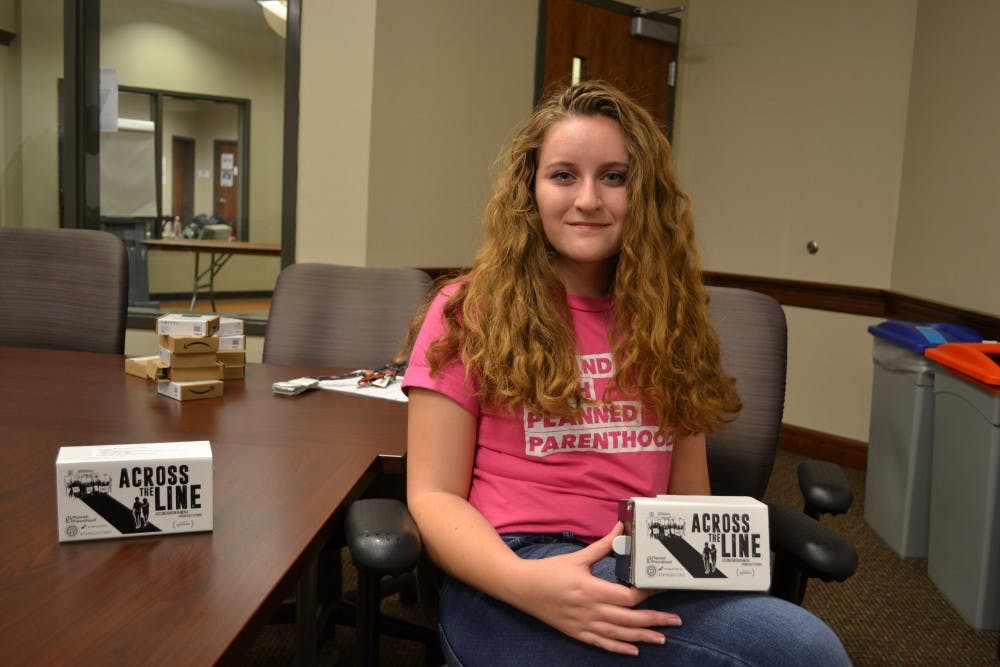 
Junior Michaela Fogarty interned at Planned Parenthood this summer where she was first introduced to Across the Line and was inspired to bring it to Elon.

Last week, Elon University’s College Democrats, Elon Feminists for Equality, Change and Transformation (EFFECT) and the women’s, gender & sexualities studies department hosted a drop-in screening of Planned Parenthood’s virtual reality film “Across the Line.” The film puts viewers in the shoes of a woman visiting a health center for an abortion. The viewer is faced with the bombardment of pro-life protesters yelling real-life recordings of slurs yelled at women across the country.

Junior Michaela Fogarty, president of College Democrats, said the goal of the event was not to discuss the morality of abortion, but rather the issue of clinic harassment.

Fogarty interned for the Planned Parenthood Federation of America last summer and worked on the Experience team which owned and marketed the film — inspiring her to bring it to Elon.

“I really wanted to bring it to campus because I feel like I’ve been so frustrated by what’s going on in the news lately and feel limited in what I can do about it,” she said. “I feel like educating people — especially on a college campus — is the best place to start.”

Fogarty arranged for 21 virtual reality viewers to be sent to Elon and used during the event. Forty-four students attended the event during the drop-in hours from 7–9 p.m. where they were invited to watch the seven-minute experience and then participate in discussion afterward.

“When you’re not as close to this work — as folks like us are — it can be really eye-opening to experience that in a really real way,” said Elizabeth Freeze, director of philanthropy for Planned Parenthood South Atlantic about
the film.

“I think the graphics are not super high quality, but I think that the experience of being shouted at is unique, and one that women experience on a daily basis that visit abortion clinics. And what is being screamed and the tone is very real,” Freeze said.

Fogarty purposely did not over advertise the event because of the strong opinions surrounding Planned Parenthood and abortion.

“I know there are a lot of people who don’t support Planned Parenthood and don’t support abortion,” Fogarty said. “We are in North Carolina, and even though it’s a campus event, I recognize that those opinions exist.”

She said they received push-back from two faculty and staff members who expressed their opposition for the support of Planned Parenthood, but “nothing was threatening or serious.”

Fogarty hopes the event inspired people — in any capacity — to take action.

“I hope that people learn something and see something from a different perspective — that they take some action,” she said. “Whether that’s calling a senator or many years from now when we actually have money, they’ll donate to Planned Parenthood when they may have not before.”

Junior Nicole Harrison attended the event, and after watching the film felt that it could be a good way to open students to a topic they may not be familiar with.

“I think it’s really important to see — especially with topics like this,” Harrison said. “I think people can very easily turn a blind eye and not really be aware of the situation. This is a good way to actually see the experience and hear voices, see what the room looks like and be aware of what’s actually going on instead of pushing it to the side.”