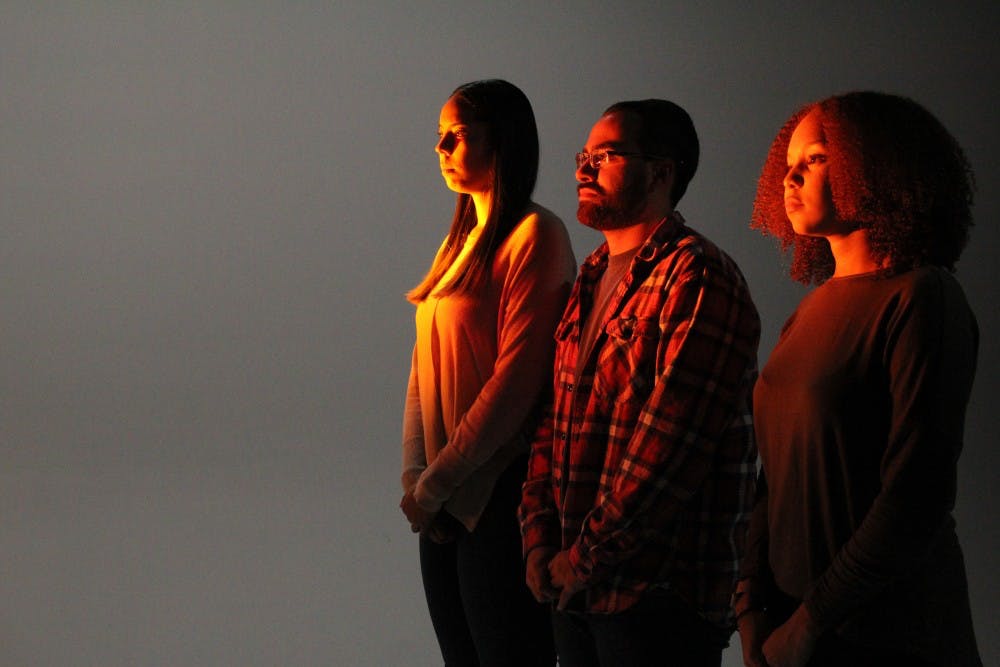 Correction: The Occaneechi Band of the Saponi Nation does not live on a reservation, as previously reported by ENN, but rather are considered a urban tribe who use their local ancestral tribal grounds for Powwows, Talking Circles, Events and Ceremonies. Elon News Network regrets the error.

Just down the road from Elon University, a community of the Occaneechi Band of the Saponi Nation resides — using their ancestral tribal grounds to host numerous ceremonies. But back at Elon there are just a handful of students who identify as Native American, and many feel during their time at Elon they have been forced to put that part of their identity aside.

Arielle Watkins, Bear Tosé and Xena Burwell, all seniors, identify as multi-racial, coming from mixed heritages and backgrounds. According to the Elon University Factbook, there are eight undergraduate students who are classified as “American Indian.”

When all three students were freshmen, there was one meeting of the Native American Task Force sponsored by the Center for Race Ethnicity and Diversity Education (CREDE) . Members of the community who identified as Native American and a local speaker came together to discuss their experiences. There was only one meeting. The faculty member who organized the initial meeting, Carla Fullwood, left Elon, forcing Watkins, Tosé and Burwell to continue the conversation on their own.

Both of Burwell’s parents are Native American — she is twice removed from the reservation, meaning her great grandmother is the most recent family member to have grown up on a reservation. She says while it was not a huge part of her upbringing, she hopes to bring that part of her identity to the forefront as an adult.

“Because these spaces aren’t necessarily present — both on campus and growing up — we were sort of forced to put our native identity on the back burner, especially because I also identify as black,” Burwell said. “When you grow up with one of your minority identities being a lot more recognized than the other, you’re sort of forced to be like, ‘OK, there is no space for Native Americans so I have to identify as solely black’ or forced to embrace my blackness because I don’t have any support system to embrace my Native American identity.”

Before they graduate in May, all three students are working to establish a new group that will provide a space for Native students — a space they never had.

“There is no club or resource rooms like there are for other identities,” Burwell said. “We wanted to create a space for Native identifying students to have that sort of space where they can have that comradery and resources to talk to other people who are going through the same experience as them.”

As one of their first plans of action, the Native American Student Association (NASA) is working to get Indigenous People’s Day recognized by the university — a holiday celebrated in place of Columbus Day. The Hall of Change in Colonnades started a petition earlier this semester and hope to bring the legislation to SGA in the spring.

Growing up, Watkins was acutely aware of her heritage on holidays such as Thanksgiving, which for people who identify as Native American has different connotations, and her celebrations were focused more on family.

“When we think of Thanksgiving, we don’t think of the pilgrims and the Indians getting together and having a happy round table conversation,” Watkins said. “It’s more of a day just being with family and getting together and talking about why we are thankful to have each other in our lives.”

Both Burwell and Watkins are SGA senators and at a recent SGA meeting, the topic of Thanksgiving came up and Burwell shared her thoughts on the holiday. She referred to the holiday as “a sham” to which her colleagues in the room — mostly white — refuted, she said.

“I got a lot of pushback from mainly the white people in the room who said, ‘That’s disrespectful,’ and things like that,” she said. “The lack of knowledge of history that goes on. It’s not the ‘Peanuts’ movie where the pilgrims come and everyone gets along. That’s not what Thanksgiving was. But you can’t learn history that you didn’t know existed.”

In her family, the holiday is referred to as “takes-giving” and they steer away from celebrating the false portrayal of a happy introduction between the Pilgrims and Native Americans.

“We take that nationally recognized holiday as a time to remember who we are, where we come from,” she said. “Granted we don’t have a lot of knowledge of who we were, but we always bless the food with, ‘This was not necessarily a holiday that was made for us, or beneficial for us, but we will still take the time to give thanks to one another.’”

Both women were shielded from watching movies such as Pocahontas when they were younger because of how they portrayed Native Americans.

“My parents were very clear, like, ‘this is how America views this and these are the reasons this is wrong,’” he said. “In that sense I’ve been able to see a lot of different sides. Just understanding where the white side of my heritage understands this, and the native and the black sides and how this all comes together and how my identity kind of gives me a platform to better understand, and share that understanding with others.”

After coming to Elon, all three students hoped to be able to explore their native identities more than they were given the opportunity to do. For Burwell, one of the biggest issues she has faced while on campus for almost four years is tokenism in
the classroom.

“Being that one Native kid, that one back kid, that one Asian kid in a class and anytime anything comes up ... you’re supposed to speak on behalf of your entire community,” Burwell said. “I think Elon needs to recognize that this is a thing and that a lot of times it’s professors who perpetuate that and address that.”

Both Burwell and Watkins say they have been both targeted as being “the black student” as well as “the native student” because of their mixed identities.

“My experience as a black woman or Native American woman is not representative of the entire population,” Burwell said. “I think a way to combat that is education for professors because though there are a lot of great professors here, there are professors who are frankly ignorant.”

As part of Elon University’s onboarding process, professors are taken through a series of workshops and role-play activities to help better address incidents of bias or tension in the classroom.

“Those scenarios are based on things we hear from students about what happens in Elon classrooms,” said Brooke Barnett, associate provost for academic and inclusive excellence. “It’s a way for us to take actual things —we anonymize them in certain ways and change them a little bit — and use that work to try to better the classroom experience.”

Students can report incidents of bias in the classroom and around campus through the Bias Incident Reporting Form available on Elon’s website.

Burwell, Tosé and Watkins have come to find that these efforts need to be student initiated or else they won’t get done. This is one of the reasons they have worked so hard to get NASA off the ground before they graduate so that there is a platform in place for incoming classes. Tosé agrees that student initiative is necessary, but struggles with why.

“I’m not satisfied that it has to be student initiated,” he said. “Yes, it has to be on the students to get it put on the agenda, but as a university, you can’t just be reaching out to people of color to bring diversity to your school if you are not going to let them flourish in that diversity at your university. So if you are not providing students with the resources and opportunity for growth within those identities — that’s false advertising.”

The CREDE is responsible for organizing many of the student-centered events around race and ethnicity. This month, for National Native American Heritage Month, the CREDE organized numerous events including a basket weaving class led by members of the local Occaneechi Tribe.

“The Native American Basket Weaving event was one of the highlights this year, especially since we were able to bring in members of the local Occaneechi Tribe to led the class,” said Reiney Lin, assistant director of the CREDE. “I think having those who belong to the Native American community or hold Native American identities lead the way is important. The event was met with positive feedback from both the teachers and the students.

“I think the next step to grow and improve on this year would be to engage and partner with more students more and campus partners beyond the CREDE to contribute to this recognition month and beyond.”

The founding members want to make it clear that NASA is not just for people who are “one with their culture” as Native American.

While they will likely graduate without feeling fulfilled in their own exploration of identity, the three seniors are working to make sure upcoming classes will feel more welcoming and have better opportunities to understand their own identities — no matter how many there are.