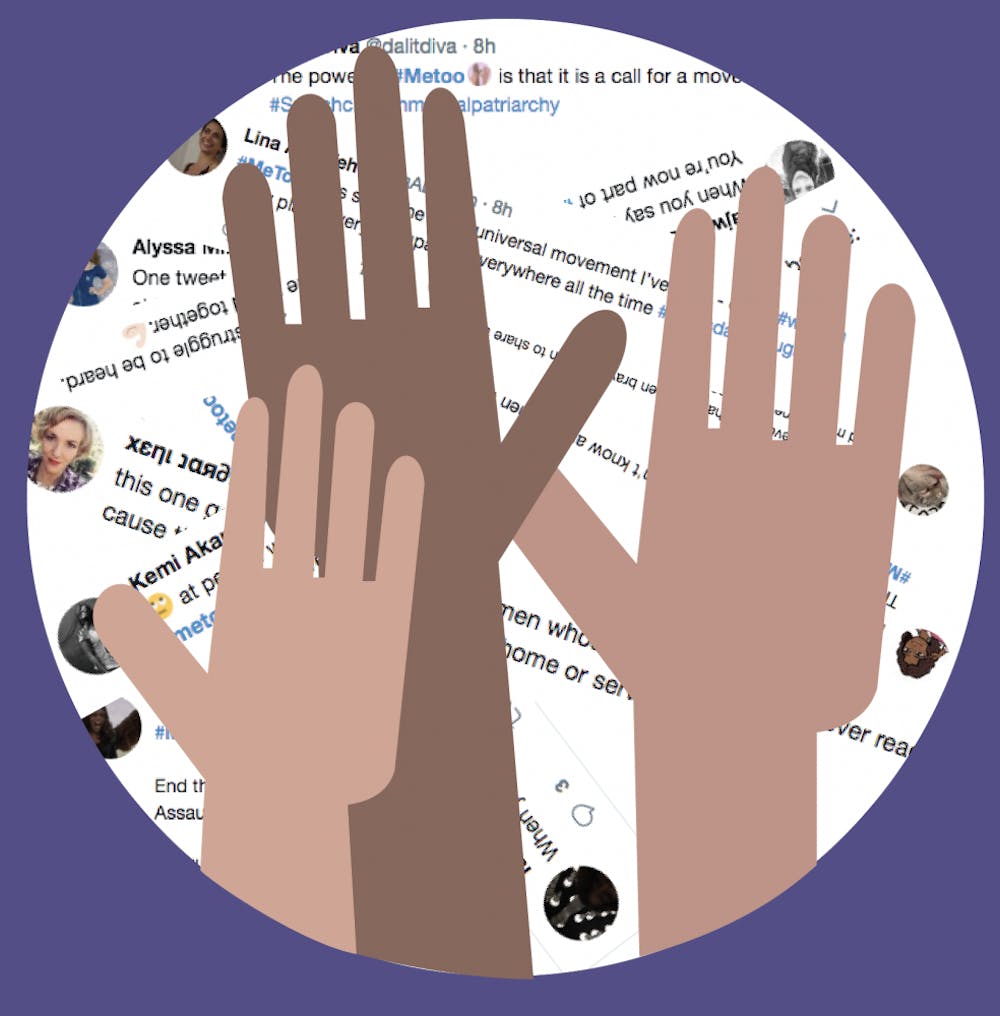 Elon students reflect on how the #Metoo campaign has served as a platform of support for them and other victims of sexual assault.  Graphic by Hannah Sicherman.

Gabby, whose last name has been excluded to protect her identity, remembers an incident two years ago as “the most aggressive form of sexual assault” she had ever faced; but earlier this month, when the #MeToo campaign resurfaced on social media to support survivors of sexual assault, the thing that hit Gabby the most was: “I don’t have one story, I have multiple.”

#MeToo is a movement that began 10 years ago by activist Tarana Burke as a vehicle to help young women — especially young women of color — who had survived sexual violence, according to the Chicago Tribune. Its recent resurfacing was brought about by the dozens of accusations of sexual abuse against producer Harvey Weinstein. Thousands of women were inspired to share their stories — some for the first time. Gabby was one of those women.

When Gabby was a freshman at Elon University, she was at a party with some of her friends. After a night of dancing, she went to find water and began talking to a guy who she recognized, but did not know. He then followed her outside to get some air. A demeanor that at first seemed friendly quickly shifted when Gabby wanted to go back inside to find her friends.

“Suddenly his demeanor changed and he wasn’t so friendly anymore. He got really aggressive and the truth is I hit him, and I ran away from him,” she said. “I think that if I hadn’t, it would have been more than sexual assault.”

Until Gabby saw #MeToo posts pop up on her newsfeed, she had not shared her story with anyone. In hindsight, she wishes she had said something sooner.

“He can blame it on drinking, he can blame it on party behavior or whatever, but the truth is, I reacted in a way that I think was appropriate and I hope that it was enough to deter him from ever doing that again,” she said.

“That was my freshman year, and the #MeToo campaign is great because it brings attention to things like these; but it is also too late for me to react to what happened in a more effective way, and I wish that I had reacted stronger at the time. I wish that I had said something like I’m trying to say something now,” Gabby continued.

Gabby’s assailant is still a student at Elon, but for some women, their assault happened before stepping on campus.

Kyra Letsinger is a freshman from Knoxville, Tennessee who was sexually assaulted multiple times in high school by her boyfriend at the time. For about two years, Letsinger was not sure if what happened to her was a problem. After visiting a therapist for another issue, he brought the assault to her attention.

“I don’t know what brought on the topic, but I had been self conscious about things since that kind of experience and he was like, ‘Well I’m so sorry you had to go through that’ and I was basically like ‘Go through what?’ I was like, ‘I was in a relationship with him,’ and my therapist was like, ‘No, that’s not OK, you obviously have some issues because of it.’”

Letsinger had been subconsciously feeling repercussions of the incidences for months.

“It was hard to realize it because once I did it was like months after it happened — because it happened multiple times — and I was just like, ‘Oh, I didn’t realize that this wasn’t even OK,’” she said.

Letsinger was dissuaded from telling people because she did not see it going anywhere. Her boyfriend had been accused of sexual harassment before, and the school did nothing about it. She told her mom at the end of her junior year, after almost a year of keeping it in.

“I kept seeing him,” she said. “It triggered me really badly, and so I told my mom about it because I had an absolute breakdown that night and I was like, ‘I don’t know how to be around him, I don’t know how to see.’ He was dating other people and I would just see that and be like, ‘Oh my God, this is someone who did something horrible,’ and my biggest thing was ‘I really hope he isn’t doing this to other people.’”

The #MeToo campaign offered a chance for Letsinger to share her story and feel supported by others who had experienced similar things. She felt the campaign gave a community to women who may often feel isolated.

“I know there are a lot of people who didn’t take part in the #MeToo campaign, but did experience it, and could see that there are other people who are with them, ” she said. “And I felt like there were other people who were with me and who had experienced the same things I had and knew where I was coming from. Instead of just staying silent, it was saying, ‘This is obviously a problem’. Whether we want to talk about it in depth and tell our actual story or not, this brief little two word message is saying this is a problem.”

Gabby says the campaign forced people to face the issue head-on and no longer ignore its magnitude.

“I feel like the biggest thing that the #MeToo campaign brings is that we shouldn’t have to hide or make excuses for this type of behavior,” she said. “The more and more times that people share the #MeToo hashtag, I think it brings weight to the situation that a lot of people realize, ‘Okay, we cant hide what has been going on anymore, we cant pretend it isn’t going on.’”

According to a 2015 Washington Post poll, one in five female students and one in twenty male students will be victims of sexual assault while in college.

“I think it’s important for all girls who are coming into college now, people who have been there before — not just women because anyone can be sexually assaulted — but I think it is important for people to know that they are not alone and that when you face situations like that you shouldn’t have to pretend like it didn’t happen or hide it as I did,” Gabby said. “You should know that you have a community that is going to support you. I think that’s a really terrifying thing that people fear when they come into college is, ‘If this occurs, will my college stand behind me?’”

While Gabby did not bring her case to the administration, she hopes that in the future, others will be inspired by her and other victims’ stories to speak up and know that they will be supported.

“There have been times before where I’ve considered saying something, but it wasn’t so wide spread,” she said. “It wasn’t big enough that I felt comfortable sharing because I didn’t want it to come across as an exaggeration or over dramatic. I think that’s the biggest fear people face that if they share that story that people will say ‘You’re over reacting or that it’s not that big of a deal.’ That’s not okay, we can’t keep ignoring that this kind of behavior is wrong and, if unchecked, it will continue to escalate.”