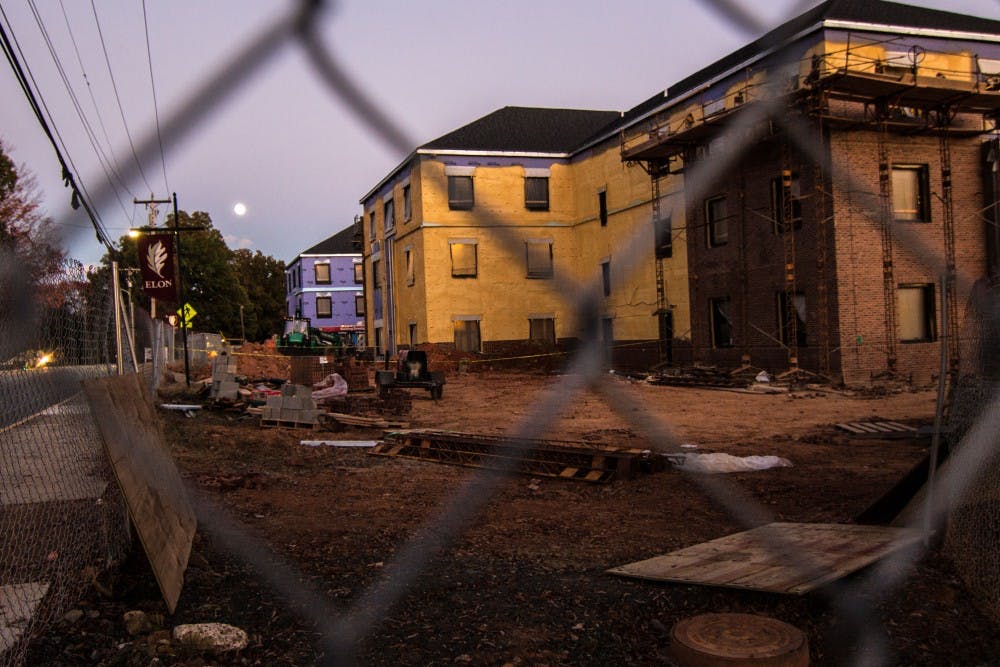 Photo by Abby Gibbs | Elon News Network
The moon rises over construction in the East Campus Neighborhood on Thursday Nov. 2.

It’s been more than six months since the East campus gym was demolished, but three residential halls will take its place by August 2018.

While the name of the East campus residential neighborhood has not been determined, it will provide housing for 309 students — both freshmen and sophomores — according to Brad Moore, director of construction management.

The neighborhood’s construction comes as a response to Elon’s rising number of enrolled students.

“This is a near-term priority because we need the additional beds to provide housing for students on campus,” Moore said in an email.

Traditional features of the neighborhood will not be unfamiliar to students. “The exterior of the dorms will have a consistent architectural style as the rest of campus. The interior will be similar to other residence halls on campus with double rooms,” Moore said.

Each floor will have a lounge, kitchen and study spaces with common areas placed in the middle of each floor.

“I think both of those areas couldn’t be more timely, because they address two of the issues in the country right now of citizenship and active involvement,” Dalhouse said.

Coincidentally, the neighborhood will be open prior to the 2018 midterm election cycle.

Dalhouse foresees the neighborhood’s atmosphere consisting of students talking about current issues because they will have the space to discuss them openly.

“There is going to be a lot of energy along with [the 2018 elections],” Dalhouse said. “We want to create a community where students can get together, debate the issues and sharpen one another intellectually.”

To combine political awareness with community involvement, several Living and Learning Communities (LLC) will be added to further the topic of debate. Dalhouse hopes to cocreate a new LLC in the East campus residence halls with Bob Frigo, associate director of the Kernodle Center for Service Learning and Community Engagement.

The proposed name for the LLC, Paideia, derives from the Greek concept of educating one another for citizenship.

“We want to provide an experience that connects these students early on with the Burlington community, and affords opportunities for students who feel passionately about certain issues to get involved,” Dalhouse said.

Other previously established LLCs, such as the Leaders in a Global World, will be moved to East campus to further promote the tone of the neighborhood.

“We’ve talked about trying to establish an ongoing identification with the neighborhood,” Dalhouse said. “It takes time, but it seeps into the culture.”