Students and Faculty not concerned with declining enrollment of majors, focused on other factors

Students and Faculty not concerned with declining enrollment of majors, focused on other factors 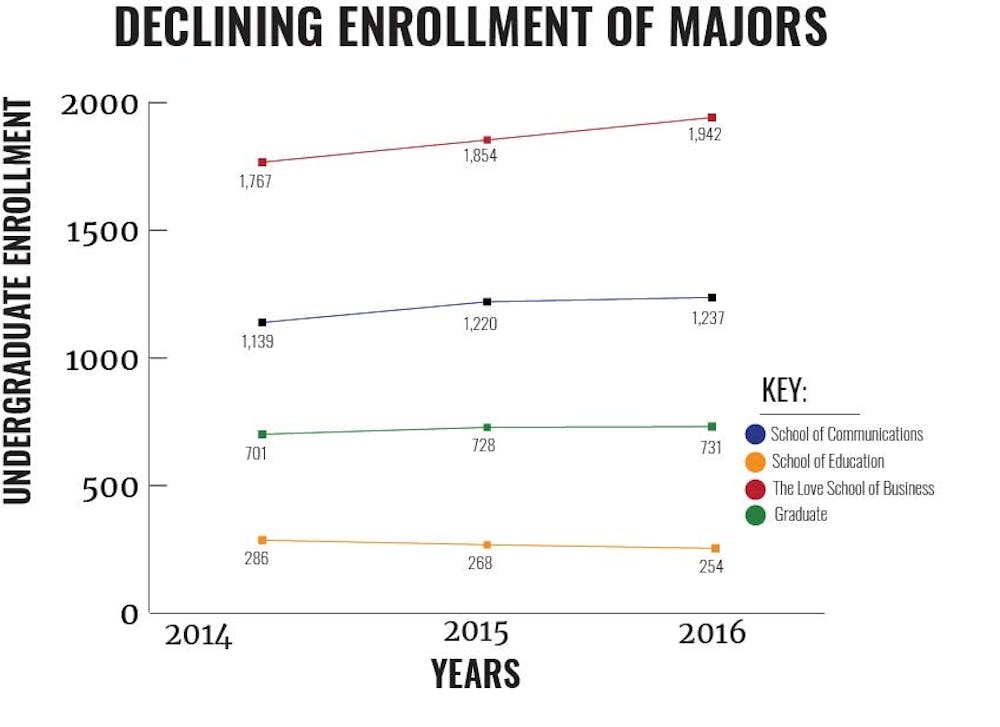 This year, several humanities departments saw declining enrollment trends continue, but faculty members said this has not affected their view on the value of a liberal arts education.

Sophie Adamson, chair of the French department, highlighted the importance of graduation rates in comparison to enrollment statistics.

“For accuracy, it would be better to look at the number of students who have graduated with degrees in French over the past ten years,” Adamson said.

Despite losing 11 French majors since 2013, the French department experienced its highest graduation rate of eight students in ten years from 2015 to 2016. According to the U.S. Department of Education’s survey on the number of humanities bachelor degrees completed in 2015, a majority of liberal arts majors experienced a less than 12 percent decline in the number of degrees awarded.

While Adamson referenced the declining graduation rates of linguistics majors, she was satisfied with her program’s graduation retention rate.

“I’m pleased that despite those national trends, Elon’s French program has maintained solid enrollments with occasional upticks,” Adamson said. “For this to happen at a private mid-sized university is impressive, as we have a smaller pool to draw from than say, a large state school with 50,000 undergraduates.”

“For me, it was more like let me see what they offer that I like here. Then let me see the reviews of the professors, and the type of department they have,” Cuen said. “That was more set in stone for me than statistics.”

“In my head, I’ve never seen [international studies] as a declining department. I feel like as long as the world is existing, you have to be aware of everything that is going on around the world. I don’t see people as becoming uninterested in world studies,” Cuen said.

When applying to college, she looked at other factors of the program such as feasibility with other majors and minors, reputation of the faculty and study abroad opportunities. She decided not to double major, but her triple minor in Middle Eastern studies, peace and conflict studies and communications allowed her to explore different regions of the world.

“I did my research, knowing that I wanted to declare as an international studies major,” Cuen said. “I wanted to do something that allows me to be involved and learn about as many countries as possible.”

Because of her triple minors, Cuen aspired to work and live abroad. Her experience in the volunteer training program for teaching English in another country through the Peace Corps, as well as the possibility of the Fulbright Scholarship, enhanced her passion for international studies.

Sophomore Brooke Wilkens is so far an undeclared major is concentrating on the importance of finding a career after graduating from Elon and rather than choosing her major based on enrollment statistics.

“I am more focused on future career aspects because I want to be sure that I am able to follow the path that will lead me to a secure job after college,” Wilkens said.

With 93 percent of graduates of the class of 2016 pursuing a career related to their field of study, Wilkens highlighted an increase of enrollment in professional schools due to a shift of students becoming oriented toward their careers. Elon’s School of Communications (10.33 percent increase) and the Love School of Business (25.55 percent increase) have experienced an increase in fall enrollment since 2013.

The School of Education has decreased in fall enrollment since 2013, but their numbers have remained steady in the mid-200s for the past couple of years.

“I think liberal arts will always be an important major on campuses, but there are definitely other fields of study that have grown so much that they are now overshadowing many areas of liberal arts,” Wilkens said.