Finding the familiar in the unfamiliar: Chabad of Elon provides support for Jewish students 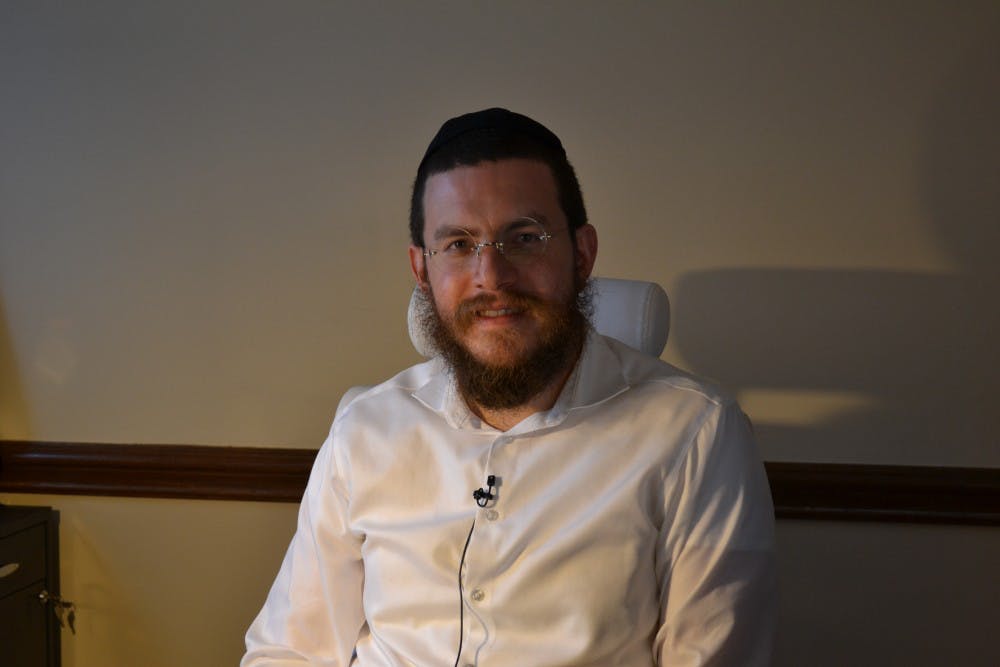 Rabbi Mendy Minkowitz moved to Elon with his family almost two years ago in hopes of providing another option for Jewish students. Photo by Alexandra Schonfeld.

Rabbi Mendy Minkowitz and his wife, Rivka, always knew they wanted to open a Chabad house. Two years ago, opportunity knocked in a small town in North Carolina, and the pair uprooted their lives in Brooklyn, New York, among other Orthodox Jewish families, and moved to a town dominated by yard signs that read, “Thank you, Jesus.”

Nationally, there are hundreds of Chabad houses serving Jewish students in college towns, but until December 2015, Elon was not one of them

Though Chabad is not officially recognized as an Elon University organization, Minkowitz and his family are working hard to get their message out.

“We are trying to build a relationship with the university, to demonstrate the value there is in having a Chabad chapter and how much it enhances the experience of students to have one around,” Minkowitz said.

As of now, there is only one organization on Elon’s campus serving Jewish students: Hillel. In the fall 2017 registrar’s report, 510 undergraduate students identified as Jewish — an increase of almost 50 students from last year’s fall report. As the number of Jewish students increases, Minkowitz finds it to be in the university’s best interest to broaden its options for Jewish students.

Chabad is historically a more religious organization compared to Hillel. Both organizations focus on outreach for Jewish students, but through different lenses. They both strive to educate and support students as they dive into their own Jewish identities, but according to Minkowitz, “Chabad’s strength is enabling millennials to access the soul of a rich tradition with deep historic roots.” Hillel supports students through a more pluralistic — or nondeominational — lens.

Minkowitz says all Jewish students, no matter how they identify, are welcome at Chabad with open arms.

“Our goal is to be a space for any Jewish student — no matter their background, their interest level, their education experience — it’s to be a support base for them while they’re here.”

While Chabad’s goal is to eventually be recognized as a campus organization, Minkowitz says being autonomous for the time being is not a debilitating factor and focuses his attention elsewhere.

“What’s most important is to be able to reach students and have our message reach as far as possible,” Minkowitz said.

Senior Maia Salinger said she has found a home away from home with Chabad. Salinger, who helps to plan most of Chabad’s events, including Shabbat dinners and holiday meals, spends many days a week with Minkowitz and his family at their home on Truitt Drive.

“I do essentially whatever they need me to do because I like having them here, and I want to make their lives easier,” Salinger said.

In just under two years, Chabad has attracted students like Salinger who find comfort in the family dynamic Minkowitz facilitates.

“Through the friends that I’ve made there, and Rabbi Mendy, Rivka and their kids, I have a family, and I have another house to go to when I need a break,” Salinger said.

This is no accident. Minkowitz says part of what makes Chabad unique is the importance placed on family and the home. Essentially, all Chabad hosted events are held inside the Chabad house which doubles as the Minkowitz’s home. This is not just the case at Elon. All Chabad houses are centered around at least a couple, and often times children. The Minkowitzes have two children, a three year-old son and a six-month-old daughter.

“Students will come, they’ll see my wife cooking — I’ll try to help out if I’m not too bad — they’ll see me playing with my child on the floor,” Minkowitz said. “It’s nice for them because it gives them a home environment, but also it’s a mental trigger to the importance of Jewish life and family.”

Minkowitz, who is originally from Milan, Italy, started living in the United States at the age of fourteen when he began studying at Yeshiva to become a rabbi. After marrying his wife, he officially moved to the United States. While there are Jewish families sprinkled throughout Alamance County, the Minkowitz family is the only Orthodox Jewish family in the area.

“Being in rural North Carolina, I walk around Burlington and nearby towns and I am oftentimes told that I am the first Jew people have seen,” Minkowitz said. “Forget rabbi — but first Jew.”

Minkowitz feels a responsibility to not only represent Chabad or his family, but Judaism as a whole.

“Being alone in a place where everyone else is different, it is your responsibility to represent, and be the best person you can be — be a good business card,” Minkowitz said. “Not for a movement, a business or an organization, but simply I want to be a person that when I’m looked upon I reflect well upon on what Judaism is.”

Salinger, who identifies with traditional Judaism, admires the Minkowitz’ openness to educating and engaging with all students’ identities.

“It’s really up to you and how you want to embrace it,” Salinger said. “If you want to show up and ask a lot of weird questions, you can. We’ve had people come before and ask questions where I was like, ‘I didn’t know you were allowed to ask that.’ But they’re totally fine with it. They’re open. That’s what I like about it.”

Salinger said Chabad has not only been a physical home for her to go, but has also provided ample spiritual support as well.

“A lot of times students are confused on where they are religiously when they get to college and I think having them there helps guide students and who they want to be,” Salinger said. “They did for me at least. I became a little more religious and found myself a little more ‘Jewishly’ since they’ve been on campus.”

In their second year, Minkowitz says they have about 100 community members tangentially involved in Chabad — around 20 who regularly attend organized events — but he hopes the number continues to grow. Salinger finds Chabad to be a crucial part of her Elon experience — even if they are not an official university organization.

“They helped me find who I am, and gave me a good support system,” Salinger said. “I don’t think I can emphasize that enough.”