Students will be reimbursed for food, laundry and replacement costs while problem is being fixed 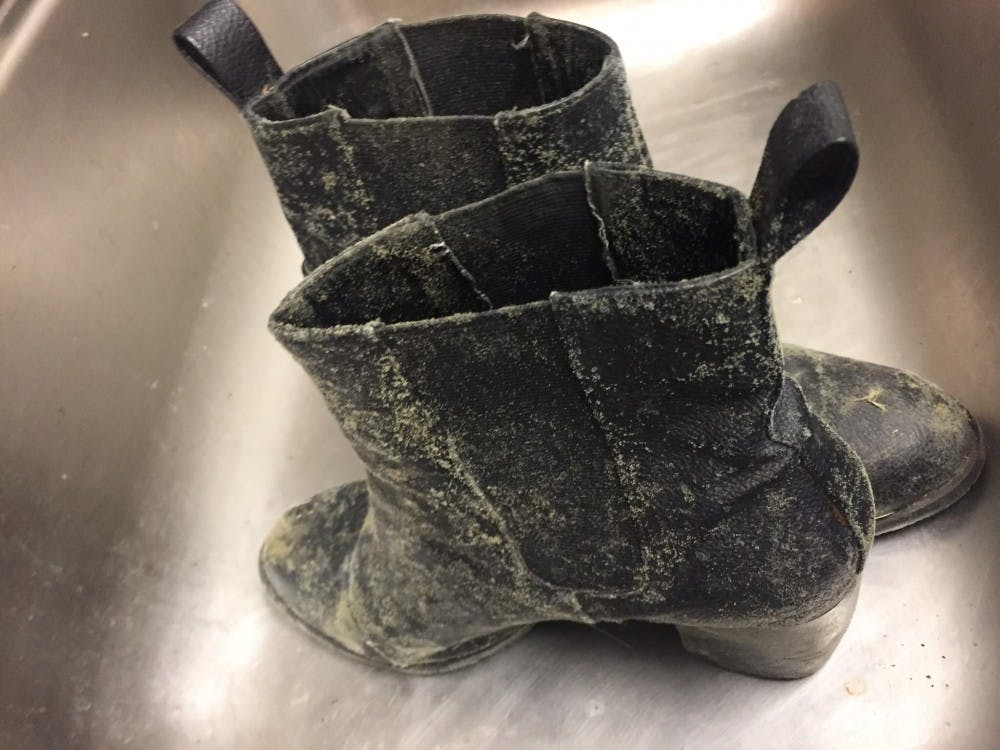 Mold spores covered personal objects, like shoes, in Elon senior Allie Dietz's apartment after a summer away from her Park Place apartment.

Only 16 students had elevated levels of mold in their apartments a week ago. But further testing identified this as a widespread problem on all floors of the building. The number of apartments with dangerously high levels of mold spores has gone from six to 19.

Park Place residents that had not already been notified of mold issues in their apartments were called into a meeting Friday, Sept.1, with Residence Life staff. Cody Miller, an Elon University junior and Park Place resident, says he had no knowledge going into the meeting what the circumstances were.

“We get to the meeting, and they explain like ‘Hey, this is what’s been going on,’ giving us the details,” said Miller. “Then they told us like 30 minutes in, ‘You guys are the ones with the higher mold count.’”

This led to 39 more students being relocated to somewhere other than their Park Place residence. With already limited extra on-campus housing options, some students had to move to the Courtyard by Marriott hotel, located at 3141 Wilson Dr, Burlington, North Carolina. After the meeting with Residence Life, they were given less than 24 hours to pack up and evacuate, either moving out that evening or the following morning.

“It was just a lot, especially a week into school and we moved in a week before,” said Miller. “They’re saying hey, you can take all of this but anything that was left out, could have mold on it.”

The relocated students are expected to be displaced for three to four weeks, with a Sept. 30 deadline, according to an email from Uchenna Baker, director of Residence Life.

The rate to stay at the Courtyard by Marriott Burlington, based on the hotel website, is about $134 per night. If they stay the full amount of time, it’ll cost $3,694 per student.

In the meantime, the university is providing transportation to and from the Marriott via shuttles and E-rides.

Transportation becomes important when a student’s five minute commute turns into a 10-minute drive, or even an hour walk. While some residents have their cars, others now living further off-campus have to rely on these shuttle services.

“There are minor inconveniences,” said junior Briya Ware, Park Place resident. “Work and outside-of-class meetings don’t particularly line up with the shuttle schedule that we have.”

The displaced students will also be provided with $150 in Phoenix Cash each week to cover meals, laundry and other relocation-related costs. They’ll also be reimbursed for their rent while they’re displaced. When asked where this money is coming from Dan Anderson, vice president of University Communications, said, “Details on who will pay for these costs will be sorted out in the future, once the total amount and responsibility is determined.”

As for the 74 remaining tenants in Park Place, some of them also have low levels of mold spores. Residence Life told these students the levels are not high enough to relocate them, and their apartments will be getting cleaned and have de-humidifiers for at least the next several weeks.

Correction: The original version of this article stated that "many" of the remaining Park Place residents had "high levels of mold spores." In fact, only several students have reported this, and the wording has been changed accordingly. The original article also said First-Call Cleaning and Restoration is performing the air-tests. But they are actually only doing the cleaning. ENN regrets the error.