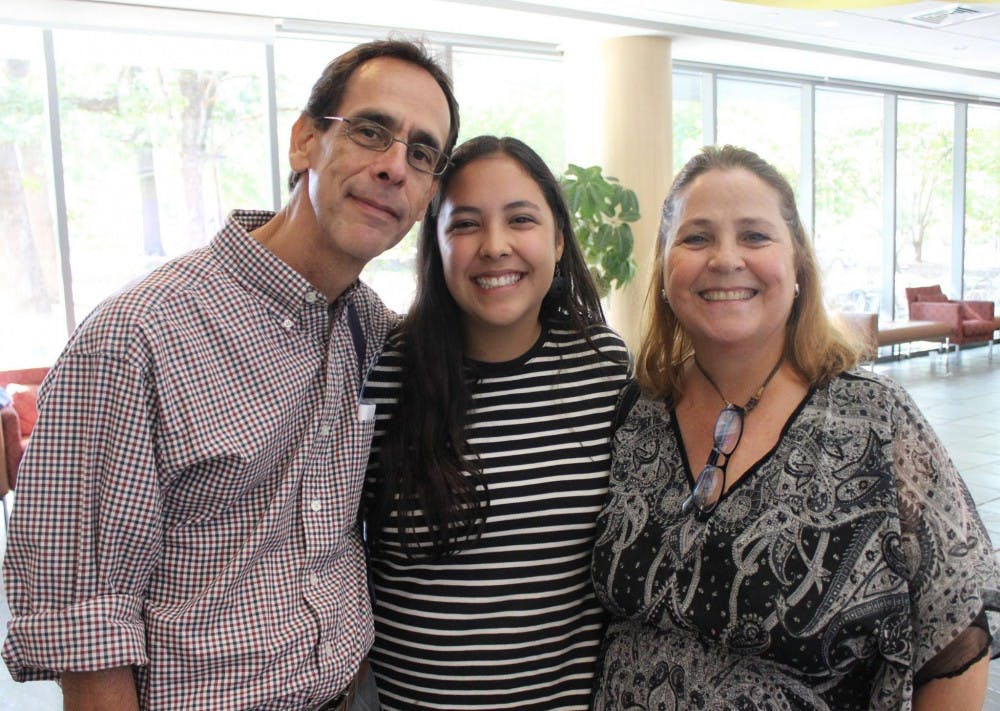 A year ago, Lucia Lozano Robledo was unsure how she and her family would afford to send her to college. Now, the Colombia-native is starting her first semester at Elon University as an Honors Fellow and recipient of the William R. Kenan, Jr. Scholarship.

Robledo grew up in Bogota, Colombia, with her parents and older brother. Until moving to Carrboro, North Carolina five years ago, Robledo attended an international school and always had aspirations to study abroad.

“I always looked forward to studying abroad because my mom lived abroad when she was little and it changed her life. She always wanted that for us,” she said.

But once it actually happened, she was struck with some unexpected challenges.

Though both she and her brother spoke English, Robledo said becoming comfortable with using English everyday was harder than she expected.

“One of the hardest things we had to face was that in Colombia we were just Colombians — doing our thing,” she said. “Then in the U.S., we came here to work hard and study, but a lot of times we faced stereotypes and things that we never anticipated.”

Robledo said she didn’t want to be placed in a box of just being “another Colombian” or “another Latina.”

“I had never thought of myself being Latinx, I was just Colombian,” Robledo said. “It makes sense because when you go from being part of the majority to the minority, a lot of things change and the way you see yourself changes a lot.”

In high school, Robledo was involved in many clubs, but speaks highly of her time working with a global health club, which helped establish more access to health care and bring health workers to countries such as Rwanda and Haiti.

The summer before her senior year in high school, Robledo was a part of Bank of America’s Student Leaders Program, a program that places high school students in nonprofits as paid interns. The program, which was new to the Triad, had a research component Robledo says directly contributed to her being a competitive candidate for the Honors Fellow program at Elon.

During her time at the Triad’s YMCA, she researched how to attract young people to volunteer at the YMCA, and at the end of her internship presented to the CEO of the Triad YMCA and their board of directors.

After that, Robledo was still unsure where she would continue her studies after gradation. Living in the Carrboro area, she always saw herself at University of North Carolina at Chapel Hill. But after discovering how little money public universities offer international students, she had to re-evaluate her options.

“I knew in my head that I had to basically get a full ride in order to go anywhere in the U.S.,” she said. “My plan was not to go back to Colombia to study because I’ve lived here for five years and there are so many opportunities and things that I care about. It just made sense to continue here.”

She started focusing in on private schools that had more money to offer her and got involved in a mentorship program called N.C. Sli through UNC, which helps Latinx students with the college process. As an international student, there are very few need-based scholarships available in the United States; they must be primarily based on merit.

“Elon was not my top school because I didn’t know about the help they could give me,” she said. “I just wasn’t really educated on what they had to offer.”

Robledo was accepted into Elon after applying early action, but with a few initial small scholarships she was still unsure how she’d be able to afford it. Her next step was to apply to the Fellows Program. She was invited to campus to interview to be an Honors Fellow and was told she would hear a decision in a few weeks.

“It was week two and a half so I was not expecting this,” she said. “I was on my way to a beach retreat with the church and I was waiting in the parking lot where there is no cell reception. I get this email from the director of the Honors Program at the time, Tom Mould, and he’s like, ‘Hey so President Lambert has been calling you and you’re not answering so please answer, we have some exciting news.’”

What happened next came as a huge surprise to Robledo and her family who up until that day had no idea the Kenan Scholarship existed. She got through to President Lambert who relayed the news that not only had she been accepted as an Honors Fellow, but she would also be receiving Elon’s top scholarship award.

“Not knowing that it existed made it even more huge,” she said. “It made it an even greater moment because I didn’t know that was possible.”

The scholarship covers all tuition costs, and though Robledo and her family still had to figure out all the other associated costs that come with attending a university, the scholarship took a huge weight off their shoulders.

Barbara Miller, associate director of the Honors Program, said the interviewer who met with Robledo was especially taken aback by the freshman.

“The person that interviewed her thought she was amazing,” Miller said. “She said do everything you can to bring her here as an Honors Fellow.”

In addition to the interview at Fellows Weekend, which Miller says is incredibly important, applicants are also asked to complete an essay.

“She just also had a really compelling and impactful story,” Miller said. “And with that we thought she was well-poised and particularly excited to — from what we could tell from both her interview and her essays — to do important work.”

After only a few days on campus, Robledo was struck with another surprise when President Lambert recognized her at convocation in front of the entire class of 2021 and their families.

“I didn’t know that was going to happen, so I died,” she said. “Convocation was really cool so I was trying to pay attention to everything, there were moments where I zoned out, but it was great. When I heard my name I was like, ‘Oh it must be another Lucia,’ but then when they started describing it, it was a very surreal moment.”

Robledo, who lives on the Honors Floor in the Colonnades neighborhood, looks forward to finding opportunities on campus to explore her interests as well as traveling abroad.

“It’s kind of crazy and uncomfortable, in a good way, to be recognized in all these ways because I’m like I just want to study,” she said. “I am very grateful.”