Community reflects on violence in Charlottesville during discussion panel 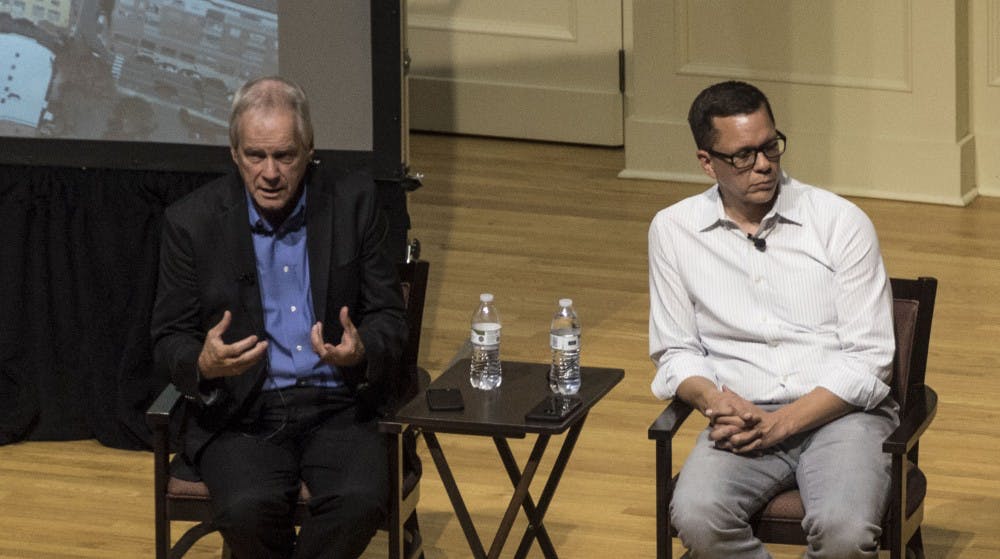 The violence of Charlottesville, Virginia, last month has subsided, but the memories are alive and well. So is the conversation to prevent acts like it.

The Elon University community gathered Tuesday night to hear Elon professors and an alumna speak on the violence and protests in Charlottesville.

Three people — two Virginia state troopers and a woman plowed over by a car — died when white nationalists and neo Nazis clashed with counter protestors at the "Unite the Right," rally on the University of Virginia' s campus. Nineteen others were injured.

In response,Elon's Center for Religion, Culture and Society sponsored a panel discussion in Whitley auditorium.

The panelists, Jeffrey Pugh, professor and interim chair of the religious studies department; Megan Squire, professor of computing sciences; Tony Crider, associate professor of physics and Jasmine Turner '15, a reporter for NBC12 in Richmond and a former reporter for Elon News Network. Each of the panelist, in one way or another, found themselves at the protests.

Squire was part of the counter protests and on the front lines and participated in a human barricade during the Aug. 11 demonstrations. Along with her husband, Tony Crieder, she attended the protests at Emancipation Park with a coalition of Raleigh-Durham branch of the Industrial Workers of the World General Defense Committee. She said she wanted to confront hate groups directly.

“Some of us showed up to put our physical bodies to show that this was not okay,” Squire said.

And this isn't the first time Crider has protested, either. In the past, he actively protested against the war in Afghanistan. Crieder, a white man, said his race gives him a privilege others may not have. And because of that, he wants to use it to his advantage. Still, he didn't like what he saw.

“I can walk through a crowd that not everyone can,” Crider said. “I can get close and report because of the way I look. I take advantage of that profusely.

“I’ve never in my life seen people marching with full on swastikas and Hitler shirts. If we don’t stand up to them, who will?”

Turner's experience was different, but she still had the same message. A black woman who jokingly makes fun of her short height, she reported the protests on the ground for NBC 12. She was face-to-face with the protesters on both sides. As a journalist, she said she needed to hear multiple perspectives. And even by relaying the message of what the neo Nazis said, she said she couldn't  understand their ideology.

"We need to see these faces. We need to know who these people are,” she said. “We need to see the face of true hatred, of people who look at me — an African-American reporter — and say that 'the race war is one day won.'”

But of all the panelists, only one actually lived in Charlottesville. Pugh lived in the city and made it a point to stand against the violence. Because it resonated with him on a personal level, Pugh said its up to citizens to be engaged to prevent further atrocities from happening.

“Charlottesville didn’t ask for this. We didn’t want this,” he said.

Pugh emphasized that this march was a display of systemic violence, intended to intimidate the city. “Racism in America has always been there — it’s here now,” he said. “But now there are things from the highest levels of this government that are giving permission for it to show itself.”

“We really do feel like there is a responsibility to protect in those moments so that things can’t get distorted."