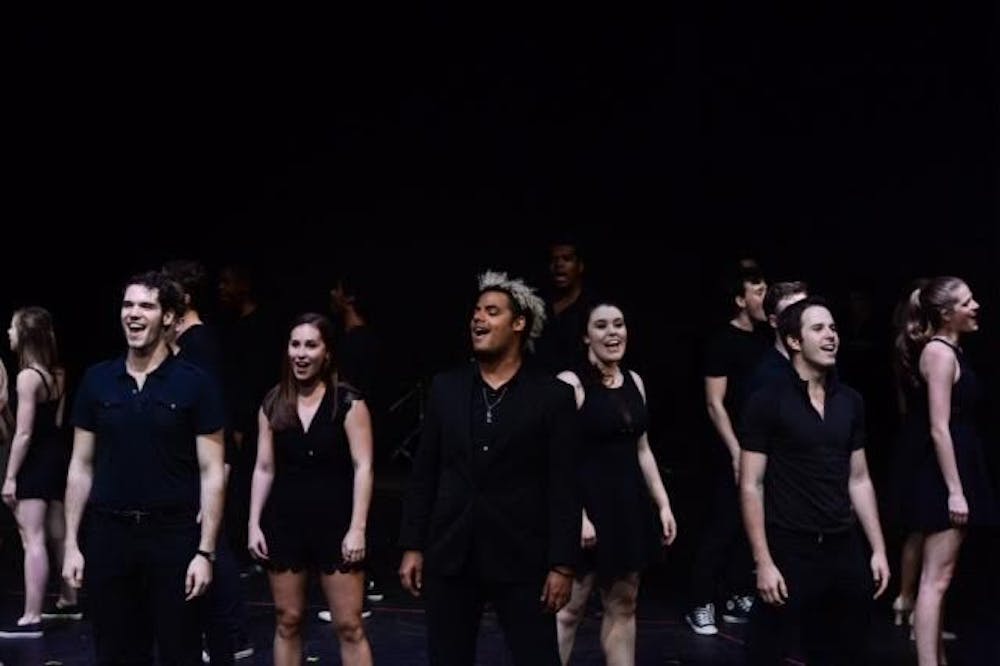 Broadway Artists Alliance ranked Elon in their “Top 15 Musical Theatre Schools,” and College Magazine ranked Elon the No. 4 program for musical theater in the country — just to name a few.

The program started just more than 20 years ago by current coordinator of the music theatre department, Catherine McNeela. The first graduating class in 1995 consisted of just three women, McNeela said.

Even in the past few years, the program has seen an exponential increase in competition among applicants.

This year’s numbers make Elon’s program one of the most competitive in the nation at an acceptance rate of 2.5 percent.

Freshman musical theatre major Tara Willey said coming to Elon was a dream come true because of its unique program and ideology.

“The thing about music theater is that it is a very competitive, cut-throat business,” Willey said. “And Elon — magically — is able to have an MT program where that doesn’t exist. Our MT program is rooted in love and support and individuality. I think what makes Elon really special is they don’t try and make you anything, they say ‘Alright you’re you, we love that, let's see what we can do with that’ and bring out your fullest potential as you.”

Many music theatre programs that exist around the country are conservatories — meaning students focus solely on their theater training. At Elon, it is a different story.

“It’s really cool getting a traditional college experience while also practicing something as intensive as music theater,” Willey said. “That’s another thing that makes Elon really cool. We still take our general education classes, but [also] have that intense MT schedule which can get crazy — but the crazy that we love.”

In recent years, the department had to shift its audition process by adding in a process of pre-screen videos. This step was added to compensate for the few audition days on campus.

This year, of the 802 applicants who applied via pre-screen videos only 387 were invited to audition on campus.

Ethan Andersen ’14 currently serves as the Music Director and Conductor for the Performing Arts department, and has seen the program’s elevation first hand.

“I often say, 'If I were to audition now, I don’t know if I would get it,'" Andersen said.  “The amount of talent that the program has now is greater than when I was around which is exciting.“

Andersen said when he and the other faculty review applicants, they look for not only talent, but also individuality.

“It’s kind of hard to define — it’s not really a checklist. We’ve got five minutes in a room with them when they come to audition,” Andersen said.  “And based off a conversation we have or we say 'Hey you just sang this song now sing this song like you are being attacked by zombies' — and that sounds ridiculous but we are looking to see if they can play around, if they can take notes, if they are game to try something new — that’s kind of the added layer.”

The Elon Music Theatre department has produced numerous success stories, many of whom are now performing all over the country or on Broadway.

“I think initially, that is what’s getting attention,” Andersen said.  “But I would also say our students are working well on Broadway and other places because our training is getting better — it's more intense, the talent of the student body is increasing so the training is increasing.”

Willey says she still has to pinch herself that she was accepted into her top choice school to pursue a career in the arts. Willey is most passionate about dancing, so she was looking for a school that could help her practice all areas of music theatre including singing, acting as well as dance.

“When I was choosing college programs I was very picky — I was like 'I want a place that I know will give the dance training that I want,’” she said.  “Elon’s dance training is exceptional, and so is [its] acting and singing — it’s unbelievably well-rounded.”