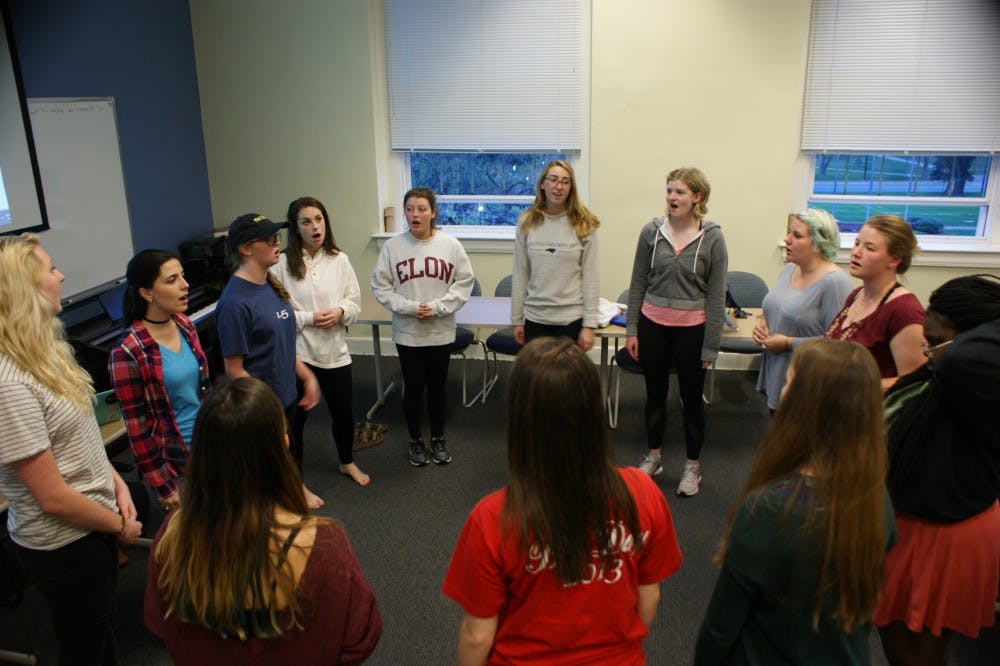 
The Shirley Tempos rehearse for their upcoming performance at Carnegie Hall as part of Total Vocal.

The members of one of Elon University’s female a cappella groups, the Shirley Tempos, never imagined scoring an opportunity to perform at Carnegie Hall in New York City. But their dreams will become a reality April 9, when they will perform in Total Vocal, a contemporary a cappella music concert in Midtown Manhattan, with Deke Sharon, the father of contemporary a cappella and creator of the event.

In this performance, 14 of the 16 Shirley Tempos members will sing four songs: “The Lion Sleeps Tonight,” “Put on a Happy Face,” “Summertime” and “We Are Home.” They will also be able to enjoy arrangements from cast members of the movie Pitch Perfect.

In order to receive this opportunity, junior Sabrina Campelo, president of the Shirley Tempos, had to take initiative. After seeing an advertisement requesting applications to perform at Carnegie Hall, she said she knew this was an opportunity her organization could not overlook.

With confidence that the Shirley Tempos’ hard work and practice would earn them the chance to perform in this concert, Campelo sent audition tapes to Distinguished Concerts International New York (DCINY).

“I love watching this group grow and exceed our potential,” Campelo said. “I am always ready for us to go bigger and better, and Carnegie Hall was definitely that next step.”

After anxiously awaiting a response, Campelo received a call this past summer asking the Shirley Tempos to perform in the concert.

Upon hearing this news, the Shirley Tempos’ musical directors, junior Katherine Shannon and sophomore Anna Corsiglia, expressed their disbelief, awe and excitement to receive this privilege.

“This is a once in a lifetime opportunity, so we absolutely had to take it,” Shannon said. “Carnegie Hall is incredibly prestigious, and it’s an honor to be invited to sing there.”

“It’s such an incredible opportunity, and I’m super excited to work with such a large group of talented people,” Corsiglia said.

Funding from SGA, donations from friends and family, money made from past performances and a small fee that each member of the Shirley Tempos must pay helped make this trip possible.

To ensure optimal preparation and a successful contribution to the concert, the Shirley Tempos have practiced for countless hours. At Elon, the members have been rehearsing during their usual two-hour practices three times each week. When they arrive in New York, the group will have three practices for three to four hours each session.

At these practices, the musical directors teach the music and conduct voice checks. Each member sings in front of Shannon and Corsiglia to ensure everyone is comfortable with the music.

“All songs at Carnegie will be performed from memory, so we want to make sure everyone is on the same page,” Shannon said.

The group’s participation in Total Vocal will not be the first time the Shirley Tempos establish their name.

In fall 2015, these female singers recorded their first single, Imogen Heap’s “Hide and Seek,” at Liquid 5th Productions in Durham.

“It was an incredible experience for all of us. For me personally, I had never stepped foot into a recording studio before,” Campelo said.

“It was incredible. I cried. It was a long process, but it was so fun,” Shannon said.

Though the organization came to Elon in 2013, its first performance did not occur until fall 2014. Since then, the group has been hosting fall and spring concerts each year.

Other universities have also reached out to the Shirley Tempos to perform at events hosted by their own a cappella groups.

“We try to take advantage of as many opportunities as we can to perform,” Shannon said.

In order to host and participate in these performances, the Shirley Tempos use part of their funding to cover the costs. In addition to the importance of funding the performances, the singers acknowledge that their passion and determination contribute to success.

“Being a part of Shirley Tempos is without a doubt the highlight of my time at Elon,” Campelo said. “The girls in the group are my family away from home.”

“I love being in an a cappella group,” Shannon said. “It is a great community of people, and I love the girls in my group.”

As for the future of the Shirley Tempos, the members will be releasing their EP at their spring concert April 29.

With recorded songs, appearances at social events and a performance at Carnegie Hall, the members said they cannot wait for what the future has in store.

“It has been so wonderful to watch our group grow from where we started to where we are now,” Corsiglia said. “After just a few short years, we’re heading to Carnegie Hall.”