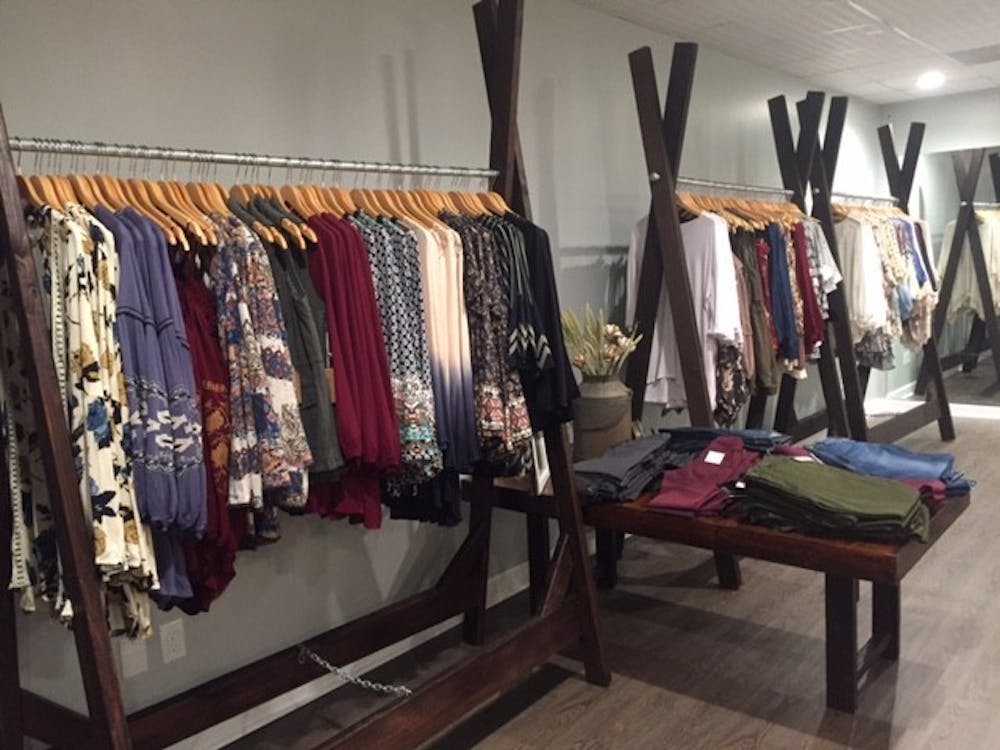 On Jan. 21, the vacant storefront on W. Lebanon Ave. — previous home to Mynt Boutique — will open its doors to a new boutique run by Elon University graduate, Melissa Deaton '13.

Deaton graduated with double major in accounting and finance and since then has been working in the Phoenix card office, where she is now the business coordinator.

Swiftly after graduation, Deaton enrolled in Elon’s MBA program and graduated in 2015. During her two years in the graduate program, Deaton was presented with the task of creating a mock business plan.

“I was like, 'Wait a minute. Let me do something that I am actually interested in.' So I did the mock business plan for a boutique, and the more I thought about it, I realized I could actually do it,” she said.

After spending years as a student at Elon, Deaton decided there was no better place to open a business.

“I want to do this for the students, faculty, staff and community,” Deaton said. “I knew I wanted it in Elon from the very beginning.”

And when coming up with a name for her store, Simply Oak, Deaton did not have to look far for inspiration.

“Everyone knows as a student here the symbolism of the oak tree. When you come in here, you’re given the acorn, and when you leave, you get the oak,” she said. “I wanted it to represent the student growing into a oak — they’re becoming a person. They’re finding themselves. I want this to be a place where they can come and find clothes they feel comfortable in.”

At first, Deaton envisioned placing her store on the first floor of Park Place, which is still vacant. But when she got the call that 108 W. Lebanon Ave. was available, she knew it was her shot.

Since then, it has been a nonstop adventure for the budding entrepreneur. In October, she attended the Atlanta Apparel Market, where she purchased around 80 percent of the store’s merchandise.

“When I went to Atlanta, they actually had more, what I call, boutique brands — brands you don’t find in the department stores, and stuff they strictly sell to boutiques,” Deaton said. “It’ll be more unique pieces and there will only be a few numbers of each piece. Once they’re gone, they’re gone. It’ll be a different piece the next time I re-order.”

Deaton also did her own research on various brands and has been choosing items to stock the shelves come opening day. In addition to clothing, Simply Oak will have candles, pillows, blankets and handmade jewelry that Deaton says will appeal to everyone.

Simply Oak’s price points will be more affordable than Mynt Boutique, a common criticism of the previous downtown Elon store.

“That was something I heard when I was doing my initial research on getting the boutique started: What did people want to see? What sorts of price points did they want?” Deaton said. “They mentioned that they couldn’t afford some things [in Mynt] and that they would like to be able to go in and purchase multiple items at once.”

Deaton has received a lot of help from friends and family in preparation for the grand opening. In addition, she took out a loan to help financially support her endeavor.

One of her friends, and former classmate, Byron Bellman says he is not surprised that Deaton is opening her own business after watching her dedication and hardworking attitude first hand.

"Two of our last classes of the Winter and Spring sessions were Entrepreneurship I & II which required us to create a business based on real life market conditions. During this five month period many conversations were had about going out on our own and what types of businesses we would want to go into so I am not shocked in the least with Simply Oak," he said. "I personally believe that Melissa has what it takes to make Simply Oak a success story considering her local connection and Elon education."

Deaton says her education at Elon prepared her substantially to take on owning her own business, both has an undergraduate and when pursuing a MBA. Since graduating, she has kept in contact with many professors, but in particular, it has been Professor Richard Hackworth who has provided guidance over the past few months.

“I’ve sent him my business plan and he’s gone over it,” she said of Hackworth. “He has been absolutely amazing. I can send him a message, and if doesn’t have the answer, he will find someone who does. He has been super helpful.”

Deaton also gives a lot of credit to her accounting and finance background that she gained from Elon.

“I’ve been able to pull bits and pieces [from all of my business classes] that will help to hopefully make this successful," she said.