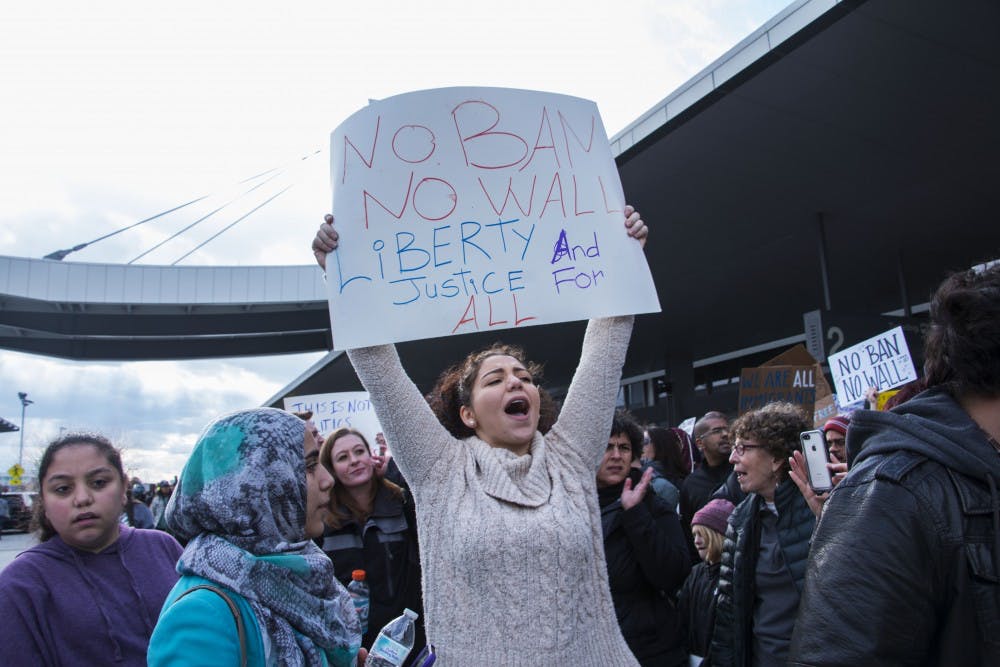 
Protestors at RDU on Sunday repeated chants such as “say it loud, say it clear, everyone is welcome here” and “no Trump, no KKK, no racist, fascist USA”.

According to the airport, more than 1,000 people were present for the protest. The original permit issued by RDU allowed for a protest of 150 people, prompting the airport to call for the protest to end at 3 p.m., an hour earlier than originally scheduled.

The protest dissipated shortly after 4 p.m., as police officers ushered attendees onto pre-arranged shuttle buses. No arrests were made at the protest.

Protestors carrying signs opposing what many have called the “Muslim ban” repeated chants such as “say it loud, say it clear, everyone is welcome here” and “no Trump, no KKK, no racist, fascist USA”.

“I’m out here because I don’t know if my constitutional rights have been taken away,” said Ma'idah Lashani , a protestor of Iranian descent from Chapel Hill. “With this new administration, all the rules are out the window. And that includes fundamental freedoms and things that are essential to our country, not just as Americans, but as citizens of a democracy.”

More than 1,500 people indicated that they were attending the protest on a Facebook page created for the event. According to the page’s description, the event was scheduled for 1 p.m. “in solidarity” with a protest at the White House starting at the same time.

The RDU protest was organized late last night after similar gatherings sprung up at airports across the country. Images emerged on Saturday night of throngs of demonstrators assembled at New York’s John F. Kennedy International Airport and at Washington D.C.’s Dulles International Airport.

Approximately 50 protesters gathered at Charlotte Douglas International Airport on Saturday. The protests in Charlotte resulted in six arrests, according to the Charlotte Observer.

Some educational organizations and institutions have condemned the order, noting the impact it may have on students from the countries identified in the ban. Mary Sue Coleman, president of the Association of American Universities, an organization of 60 American and Canadian universities, said “the order is already causing damage and should end as quickly as possible.”

“The order is stranding students who have been approved to study here and are trying to get back to campus, and threatens to disrupt the education and research of many others,” Coleman added.

After the protest, on Sunday night, Elon University President Leo Lambert sent an email addressing the executive order to students and faculty.

"Elon’s Global Education Center staff members are working individually with international students and scholars to offer counsel, guidance and support; in order to safeguard privacy, we will make no statements about individuals who might potentially be affected by the Executive Order," said Lambert. "However, we are relieved to report that no members of the Elon community have been stranded outside the United States because of this Executive Order."

Lambert also said that he and other North Carolina University leaders will be traveling to Washington D.C. on Tuesday to meet with the state’s senators and congressional representatives and to voice their views on how immigration policies will impact North Carolina higher education.

Students, visitors, legal permanent residents of the United States and refugees from a number of different countries were held up at airports Saturday night in accordance with the order, which was signed on Friday evening. Some of those stopped were blocked from entering the United States, with some being sent on return flights out of the country.

“We have to stand up for American values,” said Safia Swimelar, a professor of political science and policy studies at Elon University, who was at the protest on Sunday. “This is who we are. We accept all people. Ruling without consulting lawyers, without consulting bureaucratic agencies is bordering on authoritarianism, and we can’t accept that.”

The American Civil Liberties Union estimated that between 100 and 200 people were being held up in American airports in accordance with President Trump’s order. The ACLU announced late Saturday that a federal judge had blocked part of the order, preventing refugees held at airports from being sent back to their home countries. The order was not overturned in its entirety.