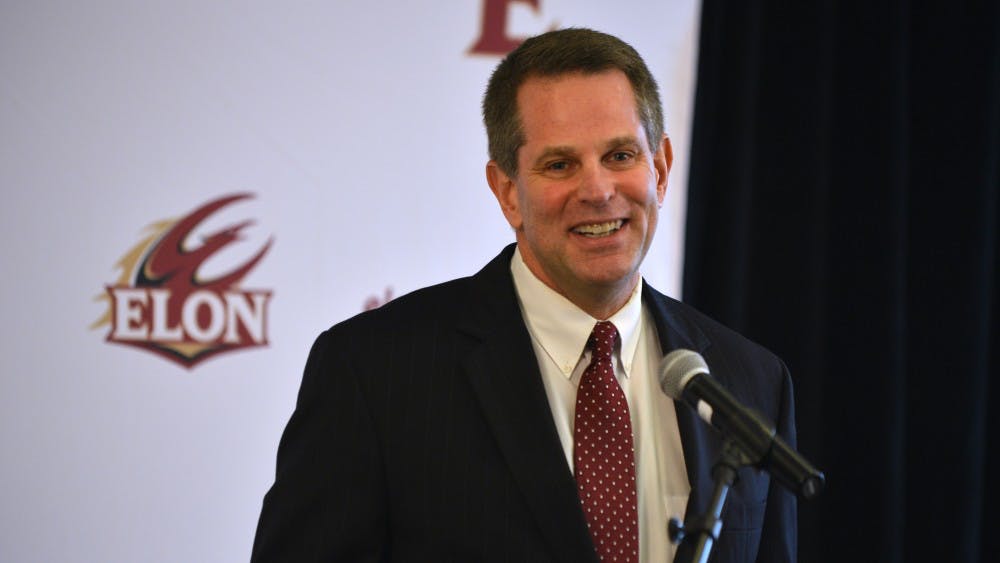 The phone in Curt Cignetti’s office was ringing regularly once the Indiana University of Pennsylvania football team’s season ended. The sixth-year coach was content with the Crimson Hawks, seeing a future with at least 10 wins a season for the next two years.

So he graciously declined each request, taking the time to answer the call but never giving what the person on the other end wanted.

But in late December, Cignetti got a call from Elon University. This was a school he remembered from his time at North Carolina State University, where he was before he was an assistant at the University of Alabama and won a national title on Nick Saban’s staff. And Elon had a brand-new opening, as Rich Skrosky resigned to take the offensive coordinator position at Florida International University on Butch Davis’ staff.

Cignetti made a promise to someone close to him that he would head down to Elon to visit, but he was not anticipating departing IUP. But, just as Elon found out a week prior when the head coaching position opened in the first place, Cignetti saw that surprises are just around the corner in the wild world of college athletics.

“I thought I knew what to expect when I came down,” Cignetti said. “However, once I got down here and saw the growth and development that had taken place on campus, it was extremely impressive to me. By the time I left campus, my whole thought process and mindset had changed. I said to myself, ‘Why not? Why can’t we get it done here?’ And I couldn’t come up with an answer.

“I had a great job. But I saw the challenge as an exciting opportunity. Every single day I’ve been here, I’m more convinced that we can build a championship program, make progress on a daily basis and really get people excited about Elon football.”

Director of Athletics Dave Blank found out from Skrosky on Thursday, Dec. 15, 2016, that FIU was interested in him as an offensive coordinator, and Skrosky took a weekend trip to Miami and visit with Butch Davis. Skrosky told Blank Tuesday afternoon that he was taking the job.

Within moments, Blank was at the side of Director of Athletics Communications Dan Wyar, and the school put out a press release on the resignation within 20 minutes where Blank called it “an unexpected development.” He stressed that the timing of the move made it essential for Elon to get the word out quickly about the opening.

“Recruiting is at a pinnacle right now in the sport of football, so the reason this was a rushed process was every bit about recruiting as it was about continuing to have leadership in the program,” Blank said. “Everyone knows January is a huge recruiting month and here we are sitting on Dec. 20 — late in the day, even — and we don’t have a head coach. So what’s that going to do to our recruiting?”

Blank immediately compiled a short list of candidates, and felt that the interest in Elon’s job was “plentiful,” with some big names reaching out to him about the job. Given recent results in the Colonial Athletic Association, Blank had some skepticism of the unknown.

“I learned through this process that Elon University and our football program are very desirable on a national level,” Blank said. “Sometimes you’re not sure about that. If you think about transitioning to this difficult conference and we haven’t had a lot of success in the first three years of football, which coaches are going to be interested in your job? There was no hesitation around the country. People see Elon as a desirable university and a desirable football program and certainly the strength of the CAA all stood tall.”

Blank said that one thing he purposefully doesn’t carry, even though many other athletic directors in the industry do, is a short-list of possible candidates for this type of situation.

The first thing that Blank had to evaluate is what Elon needed as an institution, with a sharp focus on the players currently in the school. Being connected to the current team and knowing what to seek for the head of the football program were vital for Blank, especially in poor timing.

“I have student-athletes relying on me to help solve the problem of them not having a leader,” Blank said. “I take that very seriously. Anytime we have a head coach vacancy, my responsibility is to find the right person. In this situation, it was really challenged with the timing.

“Normally, you meet with the team and have a conversation, but they were all home for the holidays, so you don’t have the ability to do the normal process. That didn’t slow anything down, but it would’ve made me feel better about communicating with our football players and saying, ‘Here’s what’s going on,’ and explaining the situation to them myself.”

In discussing the opening with President Leo Lambert and other members of Elon’s senior staff, it became quickly apparent that Elon wanted somebody that, as Blank put it, “has been in the head coach’s chair.” Blank found the candidates Elon chose to be serious with and, throughout the process, Cignetti’s profile kept him near the very top of Elon’s interest.

One thing Blank stressed was that, despite the 7-27 record in Skrosky’s three years in the CAA, he felt Elon was going in the right direction.

“In this specific situation, I believe progress was being made even though success wasn’t being found regularly on the field,” Blank said. “But I also understand where the program was going and what we were trying to do. I still believe we’re going in that same trajectory. Now we have a different coach leading the way, and we’ll see what kind of success and results that brings on the field. But I’m not to discount the transition for football in the CAA has been a rough transition relative to wins and losses, but not relative to the progress that our program is making.”

Skrosky’s departure will give Cignetti an opportunity to bear the fruit of the three years of laborious progress, something he hopes he can build around.

“I think there was a lot of good work done by the prior staff in laying the foundation,” Cignetti said. “73 percent of our players have two to three years of eligibility left, and that’s encouraging. I think we have to add to the existing roster, particularly in the key positions, the difference makers that can turn a game around quickly. It’s a process, but I’ve been very encouraged by the process.”

Cignetti acknowledged that the change is making him juggle many tasks right now, as he’s working to hire his coaching staff while trying to evaluate the players he currently has in the program and recruit the high schoolers he wants to come to Elon. While it’s a lot of work, one impression he’s left with Blank is in his approach to hiring his coaching staff.

“I also know his roots relative to his family and being a football person growing up, and I’m seeing it in the decisions he’s making,” Blank said. “He’s not settling for, ‘Well, I’ve got to get people into this position or that position.’ He’s being selective in who he is bringing in. The theme that you’ll see if you look at the background of those coming in is they’re all currently winning.

“That’s going to be really attractive to our current players, but it’s also attractive from a standpoint of he’s bringing in people that know how to be successful. That’s really important to him. He hasn’t done, ‘Tada, there’s your football staff.’ He’s making sure that he’s getting the right person for what he wants. I’ve seen it done both ways. It wasn’t a, ‘He’s bringing his entire raft of people from IUP.’ He’s looking for who fits with him at Elon, and man, that’s the right formula for success.”

Cignetti has kept two coaches from Skrosky’s staff: tight ends coach and recruiting coordinator Cris Reisert, who Cignetti quipped “has all the information for recruiting,” and offensive line coach Damian Wroblewski, though he is losing the offensive coordinator title. He’s also brought back two coaches with experience at Elon in the past, as Jerrick Hall returns to coach the defensive line like he did on former Elon head coach Jason Swepson’s staff.

But the big name returning is Tony Trisciani, who will be the defensive coordinator. The one-year assistant under Pete Lembo, Elon’s head coach from 2006-2011, had spent the previous five years as recruiting coordinator and defensive backs coach at Villanova, a fellow CAA school that finished last season as the top-ranked defense in the Football Championship Subdivision.

“I’m an offensive coach. I have been involved with the offense through the years and I will continue to be involved with the offense, so my defensive coordinator hire was very critical to me,” Cignetti said. “Tony Trisciani came very highly recommended from people I knew and trusted, and when I reached out to more people I knew and trusted, I heard nothing but great things.”

Preparing for the next step

With National Signing Day — slated for Feb. 1 this year — charging hard at the coaching staff, Cignetti has been trying to evaluate the players that are currently in the program to see which areas they will need to recruit to, taking a unique avenue to do so.

“One thing we did as a staff is we watched the high school Hudl of every single player on the team to get a feel of where we’re at, what kind of players have been recruited here, what we need, what our strengths and weaknesses are, what our short-term needs and long-term needs are,” Cignetti said. “I feel like I have a good, firm understanding of where we are today and where we need to go.”

Elon’s already seen some positives come out of that, with well-regarded Southern Durham High School quarterback Jalen Greene commit to Elon. The coaching staff has also tweeted about a few more commitments, the signs of a successful recruiting weekend on campus.

While the future is unknown, Cignetti is hard-pressed to give any number of wins he hopes Elon can achieve in the next year or two. Rather, Cignetti is striving to do things right in the super-short-term, hoping that focusing one day at a time will get Elon up to his lofty goals sometime down the line.

“Everything around here is going to be a process — living in the moment, positive energy, total focus to what you’re doing, getting the most out of every day, maximizing every opportunity, controlling the controllables, putting yourself in the best position at the end of the day for tomorrow,” Cignetti said. “There will be no self-imposed limitations on what we can accomplish, and that’s how we’re going to go about our business. That gives you the best chance for success, the best chance to attain the desired result.

“The goal here is to build a championship football program, and that’s what we’re going to do.”