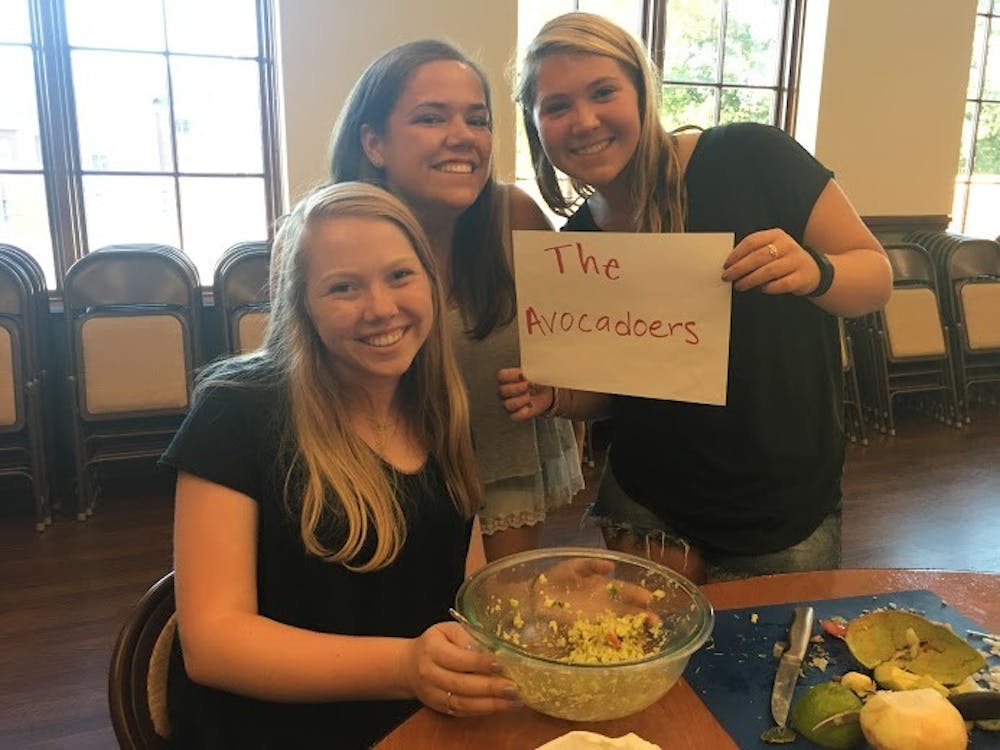 Students participated in a guacamole-making competition earlier this year that attracted over 60 guacamole enthusiasts. Photo Submitted by Erik Borchers.

Though most students can hardly find time to complete their assignments, some Elon University students are taking time out of their busy schedules to skip the dining hall lines and whip up their own meals.

While some students may like the task of being Ina Garten for a night, its not an option for others.

Dining with restrictions on campus

Sophomore Emily Pitera didn’t have the option to go to the Lakeside or McEwen dining halls because of her restricted diet caused by a health condition.

“[Last year] I would go to Numen Lumen at, like, 10 p.m., when everyone had gone and cook for myself there,” Pitera said. “Which kind of sucked, because I would have to cook all my food for the week.”

Pitera said there is very little offered in the dining halls that will conform to her diet — even fruit often has too much added sugar.

This year, Pitera has her own kitchen in a Danieley suite where she can cook food at her own convenience.

She likes to keep it simple with many chicken dishes, but says her ideal dish — if she had no restrictions — would be to make lasagna with homemade pasta and fresh ricotta.

Though Pitera cooks for herself out of necessity, other Elon students have different reasons for taking to the kitchen.

More than 90 students are signed up on Phoenix Connect for Elon’s own Cooking Club.

Sophomore Erik Borchers revamped the Cooking Club this year as president after getting involved last year and seeing little turn out.

“It’s a social organization that focuses less on the food aspect than the social aspect,” he said. “We try and use food as a way to get people through the door. The problem that I wanted to solve this year is that there is a [lack of] things to do on the weekends if you’re not involved in Greek life. This cooking club is the solution to that.”

The club hopes to meet about once a month. He says that food is a good way to draw people’s attention, but the more important component of the club is allowing students a place to get to know each other and hopefully establish friendships.

The events are free, and just this year, Borchers and his team have hosted a guacamole-making competition and an ice cream-making event co-hosted by SUB that brought in more than 120 people.

Now, the club is focusing on scaling down the events to create a more intimate setting.

When Borchers took over the club this year he brought on an executive board that included a marketer, vice president and a planning and executing committee of eight people. In addition, Borchers received $3,000 in funding from SGA to help carry the club through the end of the semester.

The BioBus also makes it easier for students without cars to access the local supermarkets in Burlington, making stops at Lowes Foods, Target and Walmart.

Pitera said she was surprised to find a selection comparable to Whole Foods at a supermarket so close to Elon’s campus.

“[Harris Teeter] actually has a whole section that is gluten-free, vegan and low-carb, which is really good,” she said.

Though cooking isn’t Borchers’ favorite pastime, he says that recently he has been experimenting with seafood, of which Harris Teeter also has a good selection.

“I’ve made a pasta dish with mussels in it a few times, so I’ve learned how to clean and cook mussels,” he said.

As part of Elon’s Burst the Bubble program during Winter Term, the Cooking Club is hosting a course of their own called
“Modern Cooking.”

The course will meet three or four times during Winter Term and take students through the process of cooking new recipes.

“It will give people the opportunity to learn some new things and make new friends,” Borchers said.