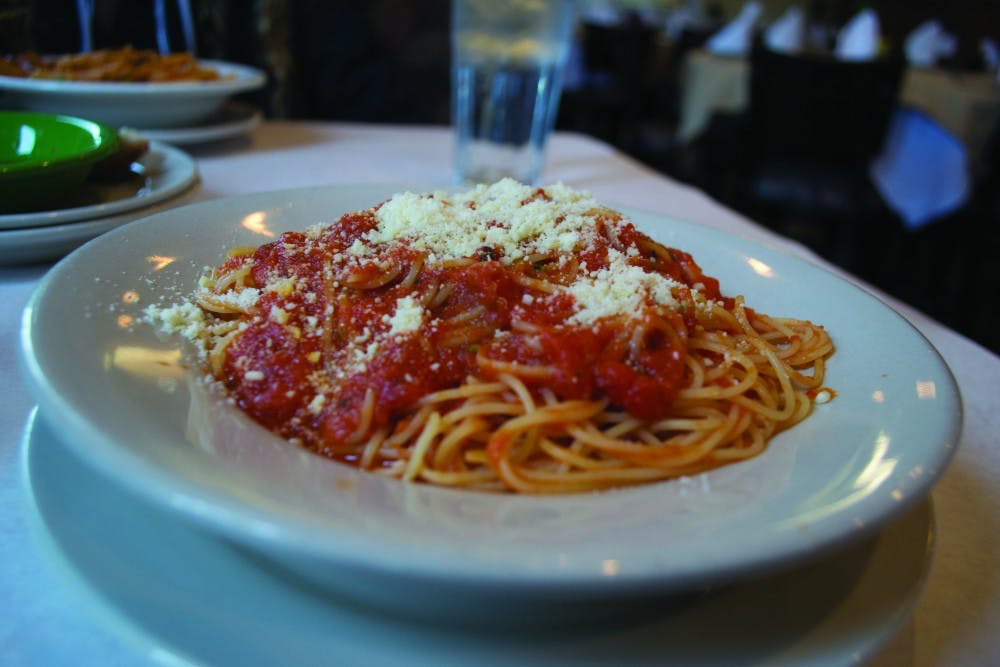 
Prego’s Trattoria on S. Church Street in Burlington offers a variety of Italian food on their lunch and dinner menus, including pasta and other traditional plates.

Opened 11 years ago by Ecuadorian native Vincento Hernandez, the restaurant is situated right across the street from Harris Teeter at 2740 S. Church St.

After living in New York and working in restaurants, Hernandez decided to make the move down south to open his own business.

“New York is too crowded,” he said.

Growing up under his Italian grandmother’s influence, Hernandez was surrounded by the food he now serves everyday at his restaurant, such as polenta and gnocchi — just to name a couple.

Over the bar hangs a pennant banner for the New York Mets and the tables of the restaurant are covered in white tablecloths and set with white cloth napkins, a contrast from most restaurants in Burlington.

Each window is decorated with neutral curtains, allowing light in while also distracting from the bustling intersection outside the restaurant.

Prego’s website says “proper attire is appreciated,” although patrons seemed to be coming from work or a day of school.

On a Monday afternoon, with few patrons inside, the service was a little slower than expected considering the time of day. But nonetheless, the owner, as well as the waiter, were welcoming and kind.

Not only are patrons served a classic breadbasket with olive oil once seated, Prego’s also serves homemade fried polenta cubes free of charge before each meal.

The prices, especially on the lunch menu, are very reasonable, with all pasta dishes priced at less than $10 for a hearty serving.

Hernandez gets to showcase these different dishes through the daily specials for both lunch and dinner.

Monday’s special was a homemade cauliflower soup. Though a bit watered down, it was a nice treat on the chilly afternoon and sprinkled with fresh Parmesan — which the waiter offers with every dish.

Many dishes on the menu are homemade, including the sauces, broths used in soup, lasagna, gnocchi and specialty ravioli. Some of the simpler pastas, such as angel hair and penne are not cooked in-house, Hernandez said.

The menu includes simple favorites like fettuccine Alfredo and homemade lasagna, as well as an assortment of fish, beef, chicken and meatless dishes.

Their desserts, for the most part, are also homemade including, Tiramisu, cannolis and chocolate mousse cake.

There is a large sign outside the restaurant that would otherwise be hard to spot and draws patrons in from the busy road outside. Hernandez says they are doing okay business-wise, and they now have a few regulars. He greeted one party of patrons with hugs.

When he opened the restaurant more than a decade ago, Hernandez wanted a name everyone would remember. He thought his own name would be too complicated, which is when he came up with “Prego,” meaning “Don’t mention it” or “You’re welcome” in Italian.