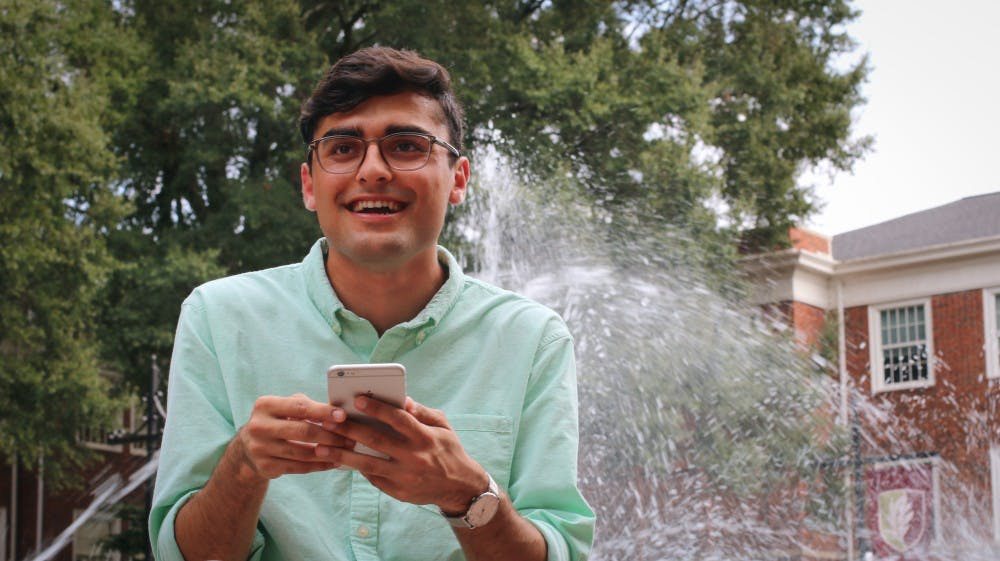 “I would say I’m very independent,” Rowe said. “I was very excited. I was ready to go.”

Rowe, originally from Richmond, Virginia, was inspired by Elon and the people he met there. True to his outgoing nature, he set out right away to get involved with communications on campus.

But given his history with social media, he was a little worried.

In high school, Rowe actively used social media, but a feeling of loss of control — as if it was taking over his life — convinced him to take a five-month break.

“I loved social media so much that I was getting lonely, and I felt sad,” Rowe said.

Years later, after moving to college, social media has instead become an integral part of his identity.

As an avid blogger and one of Elon’s social media ambassadors, Rowe points to his first few months at Elon as the beginning of what would soon become his brand and personality “Feisty Fletch.”

“I think that’s where my blog kind of started,” Rowe said. “It’s so funny because people ask me, ‘How and when did ‘Feisty Fletch’ start?’ And honestly, I remember one day just saying, ‘Hey, I want a new username.’ At one point. I even think I was ‘Fletch so Fetch.’”

The word “feisty” might come off as aggressive, but perfectly fits Rowe’s image of his brand.

“Driven, passionate and brave — someone that’s feisty is following their passions and is not afraid to say something that maybe not the whole world agrees with, or something that needs to be said,” Rowe said. “That’s kind of what I want my brand to be. It’s somewhere where I’m vulnerable.”

To Rowe, his internet success is still like something out of a dream, but those who follow him have no trouble believing that “Feisty Fletch” is something bigger than an Instagram or Twitter handle.

Adam Constantine, social media manager in the Office of University Communications, hired Fletcher because he has an invaluable combination of two skills that create successful social media personalities.

“Intuitiveness and drive. Fletcher has those in spades,” Constantine said. “He wants to be great as opposed to he wants others to see him as great.”

Rowe’s blog has grown into more than his home on the internet. He uses social media as a platform to share ideas and content with his expanding viewership, hoping that by delivering his ideas and sharing his perspective, he can help people that are scared to say what they think and feel.

As a gay man and someone who was adopted, Rowe wants to use his identity as a way to connect with his audience and share his own authentic truth online.

“These two parts of me are something I’m always thinking about,” Rowe said. “That’s always content I can create and write.”

Rowe shared his experiences with adoption and coming out on his blog, and these posts are the most successful to date. Rowe said it’s important to him that his blog and social media presence is something that people can turn to as a means to escape the pressures of the world.

“It’s as me as possible,” Rowe said. “I just want it to be honest, and light-hearted, and open-minded.”

As a summer barista at a coffee shop back home — and more recently the coffee shop’s social media manager — Rowe has an appreciation for local coffee shops, such as Oak House, here on campus.

“Whenever I travel, the first thing I look up is what coffee shops are available,” Rowe said.

“It’s my job,” Rowe said. “I’m working. But I would definitely say it’s hours and hours of my day. At least two hours of scrolling time. Back and forth between classes, or posting for a client, things like that.”

Rowe said he’s most likely to follow accounts that are constantly making content, no matter what content it is. He’s more drawn to those passionate about something and loves to showcase creativity.

He also creates content as a social media ambassador for Elon as a way to show current and future students a side of the community that administrators aren’t able to capture.

“I love being a voice for why I love Elon so much,” Rowe said.

Social media has become an identifying factor for 19-year-old Rowe, and it all came to him unexpectedly.

Rowe is inspired by his Elon friends and family and hopes to inspire them as well.

“Create stuff,” Rowe said. “Create something that is beyond yourself — something that you’re passionate about and believe in. If you have this idea in your head and think, ‘I could do that,’ do it.”

Next fall, Rowe hopes to be in New York City with Study USA, and “Feisty Fletch” will follow him.

“Whatever happens to Fletcher is going to happen to ‘Feisty Fletch,’” Rowe said. “I’m Fletcher. I’m my own person. But I’ve developed into something else.”